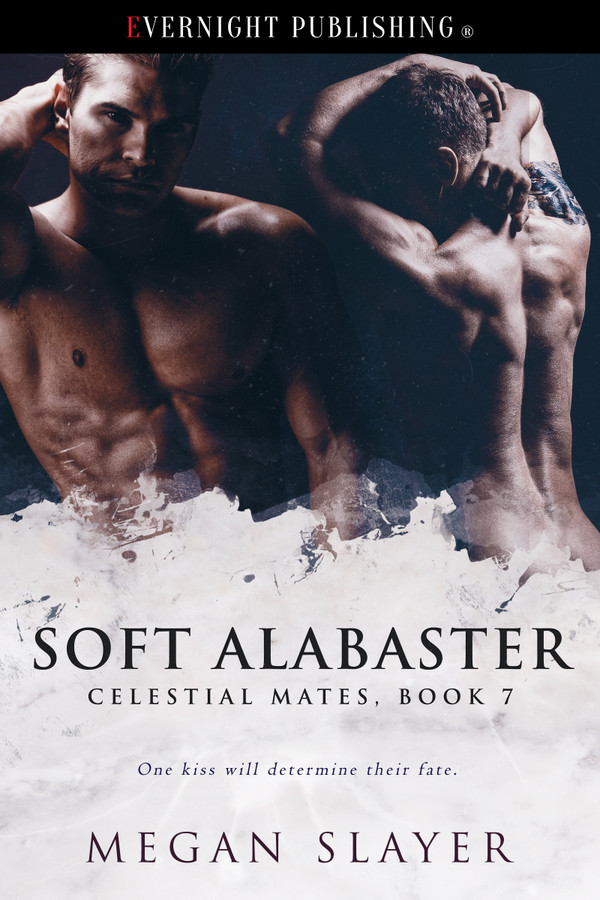 One man out of time and another desperate to share his life with that perfect someone. Can their answers come from a broken curse?

Owen Reed loves his secondhand store, but he’d rather run it with a partner. He’s tired of being lonely and having one-night stands. He wants a love to last forever. When he ends up with a statue of a man in pain, he has no idea how special this statue could be. Is love possible with the pained figure?

Sydney Keeler knows he belongs anywhere but locked in alabaster. When he’s delivered to Owen’s store, the unexpected happens—he can feel Owen’s hands on him. He wants to break free and be with the man with the sparkling blue eyes. Can Owen break the curse? If so, will Owen accept a man who’s been cursed to exist in alabaster? Can they have the love they deserve?

One kiss will determine their fate.

Sydney hated his pose. God, he’d been in the midst of begging for his life and for Arai’s life to be spared when Zeus cursed them. He hadn’t deserved to be reduced to stone. So, he’d been a terrible lover to Zeus and horrible at his job of guarding him. When he’d signed on to be a protector, he thought it was a joke. He hadn’t realized Zeus really wanted someone to play bodyguard for him. Sydney had been in love with the idea of living on Olympus and protecting a god. He never would’ve guessed Zeus truly demanded monogamy, even when he played around with everyone on the staff.

Good Lord. Who said things like, “I want you to come to Olympus and be my warrior”? No one that Sydney knew, yet he’d followed Zeus to a place that seemed like a dream and better than any fantasy.

Then again, Sydney hadn’t believed the silver fox was a true god. Were other gods roaming the earth? According to Zeus, the entire clan of Olympian deity lived there. Sydney hadn’t seen anyone besides Zeus, but he hadn’t been paying attention.

The adventure of living on Olympus was more than enough for him. He loved a good quest, especially if he could be himself. Zeus hadn’t minded he was gay. In fact, Zeus encouraged him to explore his sexuality. He spent his days guarding Zeus and his nights fucking him. All had been well until Sydney met Arai.

Arai had been everything Sydney ever wanted in a man—beautiful, masculine, sexy, and interested in him. He and Sydney guarded Zeus and stole off at night to make love. None of Zeus’s warnings had been enough to prevent him and Arai from getting together.

Sydney had been in love with Arai and felt confident about being out. He could love who he wanted and not be ashamed. He even embraced the idea he’d upset Zeus, but things would work out. They always did—until Zeus didn’t cooperate. He wanted Sydney to be his plaything and belong to no one else.

He winced, although no one could see the gesture. He still remembered the panic in Arai’s eyes when he’d been found guilty of being with Sydney and the pain of losing their relationship.

Now Sydney couldn’t tell anyone about his troubles or his curse. How could he if he couldn’t talk? At least he didn’t have that awful sheet over him and he wasn’t in the musty old house.

His brother, Max, hadn’t appreciated him and his younger brother, Stan, hadn’t wanted him. They had no idea he was locked in the alabaster. All they knew was a sculpture of someone resembling their brother had shown up in the parlor of the family home.

Voices caught his attention. He hadn’t liked when the woman caressed him, but he wanted the man to return. He could gaze at the fellow who seemed to run the shop where he was now housed. He’d been locked in the family parlor, moved to a barn, left in a garage, and then shipped to a house where Max left him in the back room. Now he lived in a “junk shop”—as the younger girl called the place.

The man with the sparkling eyes stood in front of Sydney. “Well, you’re all mine.” He folded his arms. “I’m not sure you’re worth anything, but I’m stuck with you.” His blue eyes flashed and the thin outcropping of hairs on his chin caught the light.

Heat, like the rush of excitement he felt when he’d first seen Arai, washed over him. Who was this man and why did he seem to kick the temperature up so high?

Owen loves his thrift store “Odds and Ends” and is baffled when a stranger literally leaves him with an alabaster statue and runs off. While he finds the whole situation bizarre, Owen can’t help but be drawn to the statue. Sydney yearns to be set free from the curse that has him frozen, trapped in the marble. Can Owen be the special person who can release him? I enjoyed this quick short story. I was pleased the author spent a fair bit of time in the beginning to show us what Owen and Sydney’s characters were like and explain the situation each man was in. With the short length of the story and the quickness of their romance I feel that knowing and understanding each man first, helped make the speed of their attraction seem more genuine and relatable for knowing where they were each coming from. It took me a little time to get into the paranormal aspect of the story. While fairly straight forward I was impressed that the author managed to cram a lot of back-history into just a few brief pages. Sydney being trapped as the statue had quite a story to it and while a part of me felt it would have been better had this section of the background been properly fleshed out and written in full, the short length of the story could have made that pretty difficult for the author. While I didn’t find it ideal for my own personal tastes, I still feel the author did a good job balancing a detailed enough history for the reader to understand the full complexity of what was going on. I enjoyed the blossoming of the attraction between Sydney and Owen. While a few of the plot devices felt a little clunky to me – in particular, Zeus coming in to Owen’s store and just happening to insist Owen not do one particular thing – overall I enjoyed the flow of the story The real joy for me was Owen and Sydney’s characters. They both felt realistic and layered. Sydney in particular had a complicated and refreshingly different history and set of circumstances that I enjoyed learning about. Owen was a lovely albeit normal young man who I instantly felt an affinity for. Watching these two men learn about each other and fall in love was delightful. Very different and just a little sexy, this was a good short story and one I enjoyed.