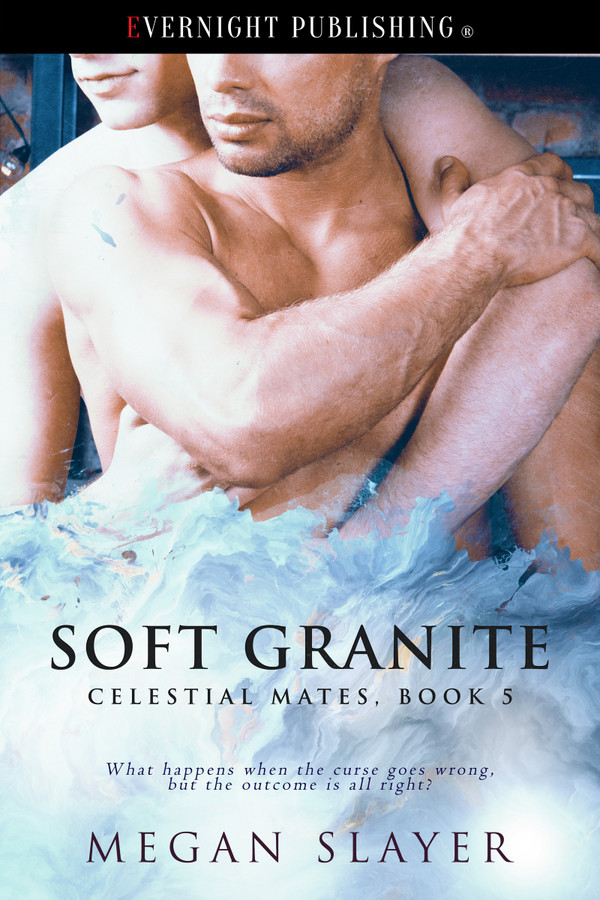 What happens when the curse goes wrong, but the outcome is all right?

Ryan Rourke wasn’t looking for love when he sat at the foot of the statue, Michael Emerging. The inanimate object listens and he could swear there’s someone beneath the granite. One night he gives into his desire and kisses the statue. It won’t hurt anything, right? It’s just a granite statue—except there’s a soul in the cold rock.

Indio fell in love with Ryan the moment the shy college junior spoke to him the first time. The tenderness, warmth, and sense of humor were everything Indio wanted—if he weren’t trapped in granite. The attraction is stronger than he ever thought possible. Can Ryan’s kiss free him forever? Or will the power of Zeus and the majesty of the curse be too much to overcome? If Indio has his way, he will get his man.

Ryan followed Indio into the building. He couldn’t wrap his mind around what had happened. Indio was real. He glanced back at the empty platform. He’d seen Indio walk off the stone slab and his skin turn from harsh gray to pale peach. If Ryan believed what he’d seen, then the curse story was possible.

He walked into the first life drawing room. Indio darted ahead and snagged one of the robes the models wore between stints posing nude.

Although he should be on his guard, Ryan swept his gaze over Indio’s nude form. For a man who’d spent time in stone, he was still toned. A bit pale, but if he’d been out of the sun, he would be pasty. His inky black hair curled over his forehead. When he glanced back at Ryan, his icy blue eyes sparkled. He strode with purpose, but not swagger. His velvety voice slid down Ryan’s spine and Ryan longed to grab his tight ass. Ryan wanted to gawk at Indio’s package, but also didn’t want to look too eager.

Indio covered his nudity in a robe. “Where do you want to start? I’ll explain everything.”

“I’d like to start by undressing you and licking my way all over your body,” Ryan blurted. Shit. He’d said that out loud.

“For a man who seemed afraid of me, you’re forward. I like it.” Indio sat on one of the drawing benches. “When I convince you I’m real, we will kiss again. You’re a good kisser.”

Convince? He could see a real man who’d stepped out of a statue. There was no need to prove what he’d seen. Still, he should apologize for what he’d said. “I’m sorry. I shouldn’t have said that out loud.”

“I don’t mind. I want to kiss and explore you, too.” Indio grinned. “I’ve learned if I want someone, I need to be honest and go for him.”

“You want me? Or someone else?” He needed to stop talking.

The overall concept of this story intrigued me and that’s why I wanted to read it. But, even though I like the concept and what the storyline was getting at, for me personally, not anyone else, me personally, it was too focused on the sexual relationship. I love the connection they had and I do get being cursed for 5 years adds up, but, like I said it’s a personal thing. Overall, it’s not a bad book. Give it a try yourselves and see what you think. Ryan has been half in love with the statue called Michael Emerging since he first saw it 3 years ago. Which is weird because it’s a statue, for crying out loud. But he gets the feeling that statue sees him and hears him. Even if it is just his imagination. But after hearing a strong there may be other statues that come to life and after having a really bad day thanks to an asshole, he poured his heart out to the statue and then kissed it bye. And all of a sudden Indio was there in real life. Now that he’s back to life, saved by Ryan, he has to figure out how long he has until he’s stuck again and how to get out of this curse. But his ex and his bf, who cursed him to begin with, have found out he’s back alive, and they’ve come back to kill him like they meant to to begin with. Ryan and Indio just hope they can find the right help and in time. Can you imagine being cursed as a statue, able to see and hear everything but not be able to do anything about it? Especially when the one that intrigues you the most leaves you the most wanting and you can’t even say hi. That’s what Indio had to deal with. He saw Ryan every day and heard him pour his heart out longing to hold him. He wishes he could get revenge on his ex and his lover for what they did to him, but he’s stuck. And when he’s finally free, he has the curse still hanging over his head. It’s a tough way to be. I felt for Ryan. The man he longs for, finally, is one he can’t have. Encased in granite. And everyone is calling him weird and crazy because he talks to the statue all the time. When Indio comes to life, is still heartbreaking because they don’t know how much time they have. Like I said, it’s a good concept. I like the overall bones of it. Give it a try.