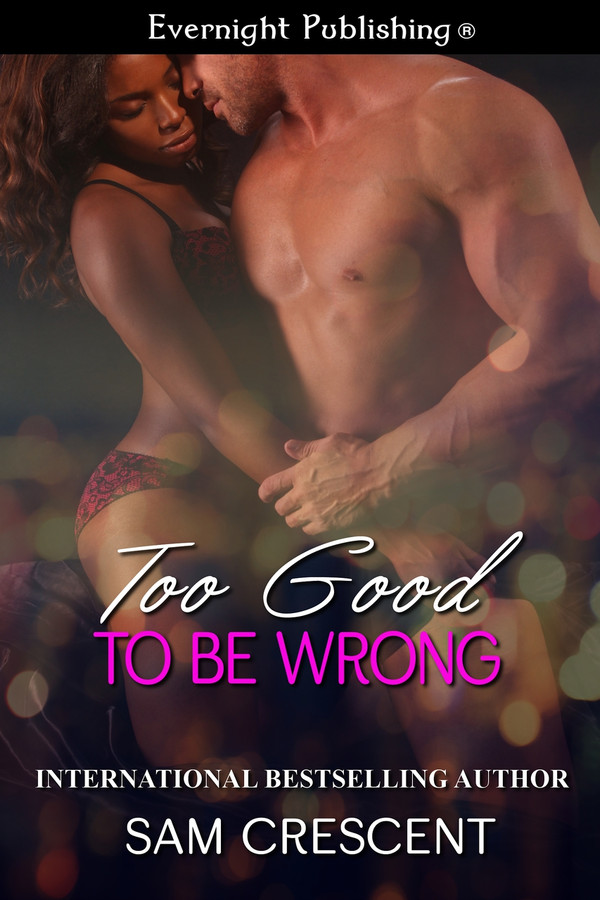 Henry wanted April from the first moment he saw her, but he was already dating her best friend. There was no way he could have her, so he did everything he could to forget the mocha-skinned beauty.

When a car crash injures April, and kills her friend, she doesn’t know what to do. She visits Henry since he’s just lost his fiancee, and she’s surprised when Henry offers to help her when she can’t work. For as long as she’s known Henry, April has been attracted to him but she would never act on it. She’d never betray her friend.

What will happen when they’re together, with nothing stopping them from going after what they both want? The moment Henry touches her, April knows he’s the love of her life. Something so good, couldn’t be wrong, could it?

This is a previously published work. It has been expanded and edited for Evernight Publishing.

He stared at her, and something snapped.

Reaching out, he grabbed her wrist tugging her close. She tripped and fell against him. He sank his hands into her hair, gripping the length in his fist.

Henry took what he wanted for a damn change. When he slammed his lips down on hers, April tensed in his arms. He waited for her to push him away, but she simply stayed frozen.

Sliding his tongue along her bottom lip he coaxed her lips open moaning as her tongue touched his.

Time passed. He didn’t know how long it took for her to respond, and he didn’t care. Something changed within April. She wrapped her hands around his body, holding onto his shoulders. He pushed her up against the nearest wall, consuming her lips as she wrapped her arms around him.

This was what he’d been craving all those months but kept secret. April filled his thoughts, forcing him to want something he didn’t think he was allowed to have.

“No, stop talking,” he said, kissing down her neck, sucking on her pulse. He needed to taste her, to devour every inch of her.

“Yeah, we’re doing this, and she doesn’t matter. It was over with Julia.” He tugged on the hem of her shirt drawing it up over her body. He revealed her full, brown tits with a darker shade to her nipples. Her body was beautiful. Henry went to his knees before her, sucking one of her nipples into his mouth. She cried out. Glancing up, he saw her head thrown back against the wall.

She gripped his arms arching up against his touch.

He glided his hands down her full curves, memorizing them. Releasing her nipple, Henry pulled her sweatpants off, revealing her sweet pussy to view. Her mound was covered in pubic hair. He opened her thighs, sliding his fingers up to the lips of her sex.

Henry didn’t say a word. He held her sex open and sucked her clit into his mouth. The taste of her exploded on his tongue, taking him by surprise. She tasted sweet and musky.

When tasting her wasn’t enough, he pushed his sweatpants down, gripped his cock, and started to work his shaft.

Wished it was longer but it was so sweet ,well done. Can&#039;t wait for the next one.❤️

This my first book by this author but I have brought a couple of her books which I have not read so far and will have to get on with that. This is Henry and April&#039;s story. This is a short read but it felt like a full novel to me. After how Julia betrayed them both, I hated how they allowed her memory and their guilty for loving each other make they waste so much time being apart instead of being together. I loved how Henry was gruff in the story he was just plain aggressive but it was because he had to bottle up so much of his emotions inside of him instead of letting the woman he loved know how much he cared about her.

So this was a great book. I enjoyed it a lot. I couldn&#039;t put it down! You just can&#039;t help but fall in love w/ Henry. It was a love story filled with a little of everything.

Sam is another one of those authors who&#039;s books are automatic buys for me. Henry and April have been fighting their feelings for each other for a long time but they finally come together. I like the fact that they took their time because the feelings of guilt are on both sides and they have to overcome that. You&#039;ll have to read the book to understand why they feel guilty, but trust me, it&#039;s great!!! When Sam writes a book like this, I love it because we usually get to see the couple years down the road and see get a glimpse of what their lives have been like. This is one book I&#039;m sure I will read over and over.

I truly enjoyed this book. April and Henry are well written characters with a wonderful storyline. I enjoyed the theme of the story. It was nice to see them get closer and learn some important things surrounding the death of her friend. I liked seeing them get to their happy ending.