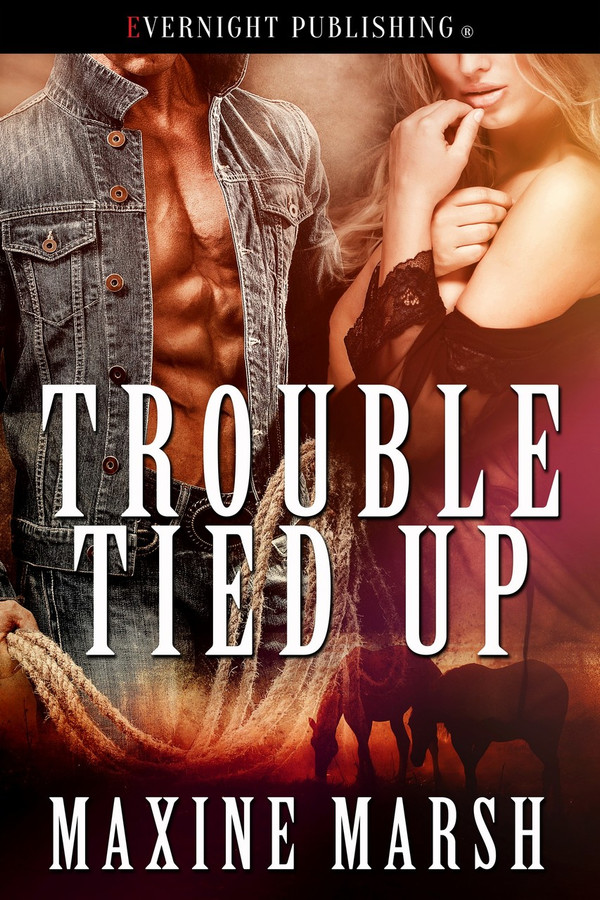 One night, in a small town in Texas, Clayton and DJ meet and have a one-night stand. He’s a serious dominant at heart who's lost his perfect submissive and DJ is responsive to his ways but is trying to stay out of trouble after getting paroled from prison. In the end they believe what’s done is done—they go their separate ways. The next day it turns out that DJ is starting a new job at a horse rehabilitation ranch—and Clayton’s her boss.

The countryside seemed to sway in the breeze, the grass danced. Without words, he stripped her. Her hat and shoes first, taking his time. He unbuttoned her shirt, slung it over the edge of the truck and ran his fingertips lightly down the center of her chest. Her flesh, still bound under her bra, puckered, responding with an ache she couldn’t remember feeling for ages. He ran a fingertip over her right nipple, teased it until it perked up and betrayed its excitement through her bra. He undid her jeans next, pulled them down and off. When he finally freed her breasts, he stood back and stared. It seemed to her that his gaze was followed by the wind—a warm tongue of breeze touched her nipples, making her pussy throb and dampen, moistness he noticed when he got to his knees and stripped her panties off.

And just like that she was naked, pushed up against a tree under its wild waving branches. With maddening patience, he took his time to look at her and touch her, to occasionally place his mouth on her breasts, to tease one nipple and then the other, occasionally running a finger down between her labia so that a spark of sensation traveled through her clit and made her whimper into the night. He looked at her the way she looked at her drawings, appraising, feeling it out and finally creating.

He used the length of rope in the back of his to pin her arms to her sides, so that she had no hope of touching him back. He nudged her legs far apart, then tied them to the tree without mercy, so that her entire pussy was exposed to the night. He left and walked back to the truck, leaving her alone. When he returned, he had a horse whip. An old sort of thing he would never actually use on a horse—mounted straps of soft suede wrapped tightly into a thick handle. He kissed her, draped the leather down her breasts and her body, rubbed her between the legs with it, then whipped her.

She’d never had this done to her before. It was like being punished by the wind. The straps were soft where they struck her, stinging more and more when he increased the strength behind the blows. She closed her eyes and felt it all. The whip found her labia, striking enough to send bolts of sensation up her torso. She cried out, softly at first, then louder and louder until she wasn’t thinking at all, only feeling. Still he whipped and whipped her.

The whisper found her somewhere deep. She had to swim back up to the moment, opening her eyes and breathing more heavily, not sure where she’d gone. Clayton stood before her, whip in hand, watching her with the eyes of a bird of prey.

“Are you back?” he asked, as though he understood completely.

She took a deep, shaky breath in. “Yes.”

He placed the whip aside, undressed while she watched, then approached her. It took a moment of struggling before she remembered her arms were pinned down. She wanted to touch him.

He stood back, watching her again. She couldn’t stand it. “Please.”

He kissed her deeply, found her mouth open and accepting. He pulled back, and placed a hand between her legs. With a swift push of his fingers between her soaking labia, she came with a speed that shocked her. The warmth that had built right up to the edge and tittered during her whipping exploded inside her. She shook against the ropes, against the tree, against his hand. He smiled, an arrogant grin that made her even weaker in the knees. The fingers inside her were soon replaced with his cock. Hardness and heat invaded her and she cried out again, a strangled cry, overwhelmed and needy. Clayton grabbed the ropes on either side of her and found a strong, hard rhythm of pumping in and out of her, full of unrelenting force. Her back pushed painfully into the grooves in the bark of the tree with each thrust, slamming into her again and again. Helplessness set in, not a bad feeling but the opposite, a sense of security and a flow of energy she closed her eyes to and simply felt. Back in the darkness, sinking into the tree, feeling him, only him, and a heat building again, so quickly she got dizzy, the darkness behind her eyes swam and she came. There was the far-off sound of Clayton groaning deeply somewhere near her, a sharp bite on her breast, his intrusion coming to a halt deep inside her, pulsation and waves and gusts of breath and wind all around her.

This was a great fun, sexy, and eventful story

Flight of Fancy by Maxine Marsh