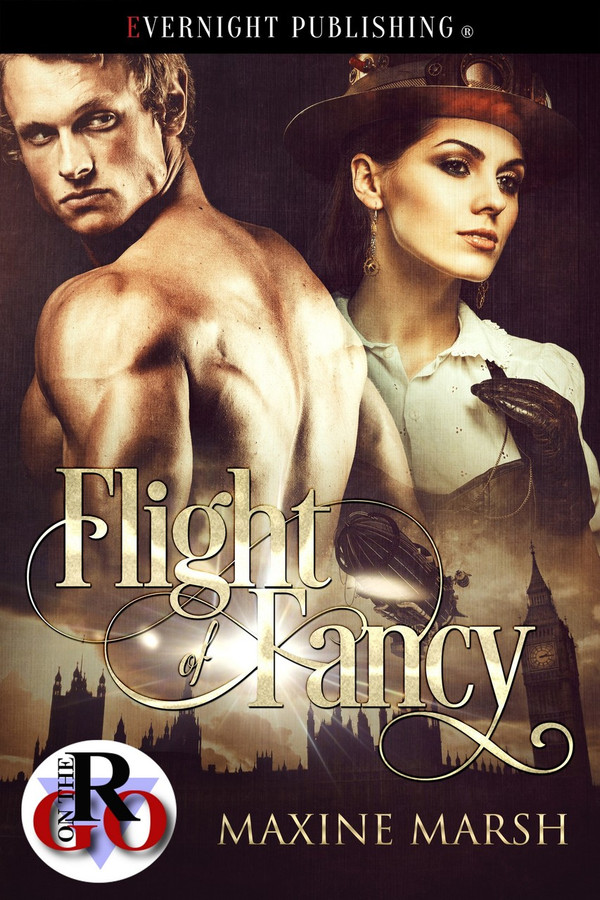 Cormac, an airship captain who chauffeurs wealthy passengers from London to Paris, has a very special passenger on his most recent private flight—the very lovely and enticing London socialite who broke his heart. Not only has the high-society Bridgette of Westermore turned her back on him, but she’s in possession of something he wants returned very badly. When he confronts her regarding his stolen invention, and stolen heart, there will be no denying their unquenchable chemistry, but both of them get more than either bargained for in the process.

Cormac returned to the passenger cabin, standing over her with every intention of intimidating and arousing her as he had the first occasion they'd spent alone.

"Have you decided, my lady?"

She stood, lower lip trembling in the way it always did before they began. He could not help but smile as she slowly stripped her gloves off and placed them aside.

She rose, turned, and bent, wobbly, over the satin-lined seat she had been occupying moments before. He did not wait for her to lift her skirts herself, but shoved them up and over her back unceremoniously. His cock twitched at the insulted gasp of humiliation that escaped her lips.

He might have gasped himself at the sight of her exquisite rear encased in his contraption. The brass chastity belt was solidly built. The outer shell was formidable, open a slit in all the necessary spots. The interior itself he had designed to be sensual, seductive, luxurious—lined with fine leather and on top of that and over her most sensitive spots, the softest fox fur. The contours chaffed all the right places, but only enough to instigate arousal, not satiate it. Weeks of unresolved desire must have driven his lover nearly mad, he thought, observing the way her spine began to arch as she raised her arse toward him, inadvertently seeking his touch. The haughty goddess's shapely pelvis was a superb sight—he had often snuck her to hidden corners at the social events they had both happened to attend and made her lift her skirts to show him the proof that she was his. Bridgette had found it just as enticing a situation as he did.

Now here she was, bent before him, both her body and her will. He enjoyed her feminine poise immensely and yet the best moment was to come. The most enticing feature of the chastity belt was not its torturous rub, or its way of denying the satisfying touch of another.

She watched, neck craned, as he removed the key from the chain in his hand. She then turned away again, seemingly appeased of his intent.

He stood close behind his lovely iron dove. He inserted the key into the lock, located on the back of the belt, just at the level of her tailbone. Instead of turning the key clockwise in the lock, he turned it counter. Bridgette's glance shot back to him again at the whirring clicks accompanying the twist of the key.

"There is a price to removal of the belt," he said evenly.

Her breath had turned to heady panting, her eyes wide with … a bruised ego? Lust? The two?

"This is your last chance to experience the belt. You may have stolen my heart, but I cannot allow you to steal my invention," he said.

Her tension softened a bit at his inadvertent romantic declaration.

With a second twist of the key, the cabin filled with more whirring noises, the sound of tiny gears chomping over one another, the sound of impending torment. Bridgette trembled. The anticipation was already overwhelming her—her tremble, her breathing and the increased angle of her buttocks toward him was proof enough of that.

Trouble Tied Up by Maxine Marsh