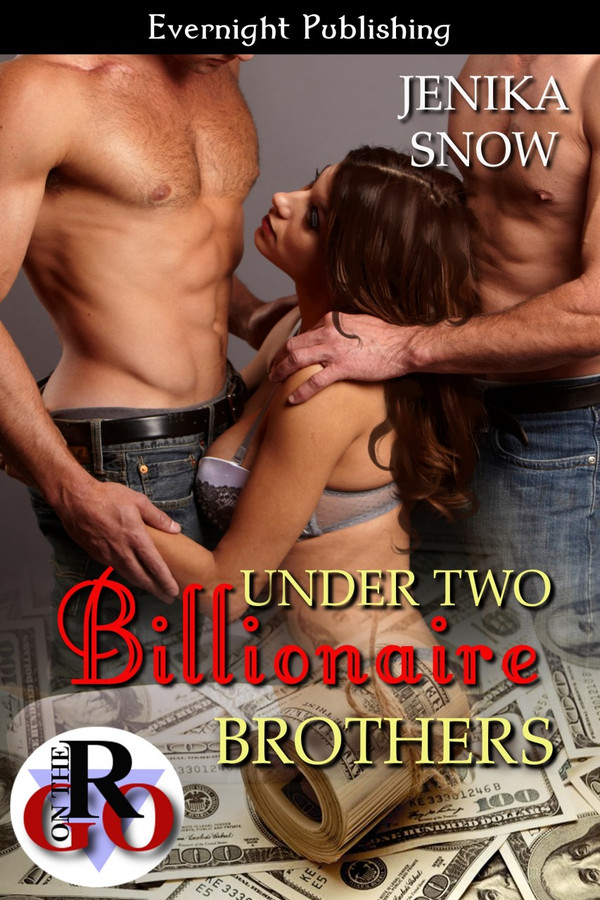 Max and Ian McKnight, billionaire brothers and playboys, can have any woman they want. And they pretty much have. Because of that, Lola Shyne knows she shouldn't want them in the worst possible way, and besides, she's their maid and a woman beneath their radar.

When Max and Ian show a sexual interest in Lola she knows it would be wrong to indulge, but her body is screaming to accept. At war with her mind and body, Lola finally succumbs to her arousal and gives in to the potent and addicting McKnight brothers.

But once it's all said and done Lola finds herself running from her feelings and the two men she left in her bed. Max and Ian aren't having any of that, not when they make it perfectly clear that they want more from her than just a one night stand.

“God, Lola, your mouth is so soft, so fucking sweet. I could kiss you all day.” He spoke in-between nibbling and sucking at her lips, causing them to swell as the blood rushed to the surface.

She tilted her head and opened her mouth wider, urging him to slip his tongue back inside. He didn’t disappoint and she moaned, pulling him closer and closer until it was like their bodies were fused. She spread her legs and he moved his hips into the cradle of hers until she felt the hard, expansive length of his cock press against her pussy. The very thought that only a few pieces of thin material separated his shaft from sliding into her pussy made her clit tingle and her nipples bead. Legs now wrapped around his hips, Lola rested her heels right above his firm ass and tugged him closer until he was grinding all that hard male length against her.

His hand cupped her breast and massaged the globe. His grip tightened and then loosened. Tightened and then loosened. It was a crazed sensation, and when he took his other hand and mimicked what he was doing to her other breast, Lola made a small mewling noise in the back of her throat. A little voice in the back of her head reared up, telling her what she was doing was wrong on so many levels. This was her boss, for fuck’s sake.

She pulled back from their kiss and sighed as he continued to squeeze her tits. “Wait. Max, we have to stop.” He kissed the side of her mouth and made a slow trail down her neck. When his mouth started sucking on her pulse point she let her head fall back. Everything drifted from her mind except what he was doing to her. It just felt too good to think about anything else.

“This feels too good to stop, baby.” His head continued to makes its way lower until he pulled her top down. Her breasts sprang free, swaying slightly as their restriction no longer bound them. The sound of Max groaning and then latching his mouth onto her nipple caused her to thrust her chest out, shoving as much of the turgid flesh in his mouth as possible.

“Fuck, Lola.” Scraping his teeth across her flesh, he slid his hands down to cup her ass. He thrust his hips forward at the same time he slipped his hands beneath the bottom of her bikini. His hands ran across her bare bottom and she dug her nails into his back.  There was no doubt in her mind that there were little crescent marks on his skin. “I am so fucking hard for you, baby. I could drive nails through steel with my cock right now.” The vibrations from his voice on her breasts sent a shot of electricity straight to her clit. “I bet you’d want me to fuck you good and hard right now, wouldn’t you? Yeah, you would. You’d spread these pretty legs and let me shove my dick right up your cunt.” He groaned at his own words and started biting her flesh, drawing it deeper into her mouth until she felt her nipple become long, swollen with need.

Lola Shyne works as a weekend housekeeper for the two richest men in Pleasure, Colorado. Ian and Max McKnight try to live up to and surpass the town&#039;s name with as many partners as they can. Their prowess is legendary and their habit of sharing a woman is infamous. From the moans and screams of ecstasy she has heard over the last two years, coming from the walls of their bedrooms, the stories are all true. She turns up her ipad and puts her ear buds in to drown out the sex play coming from the bedroom and gets back to work. Later knowing they usually slept for a few hours she figured she could finish up and leave before they came downstairs, but she was wrong. Will Lola finally obtain her dream of being the one under the two brothers? Will she give her heart and body to the two men who she desires with all her being? Are the McKnight brothers just playing with Lola or is she more than just another conquest to them? Under Two Billionaire Brothers is a very quick read, but one that will have you panting till the end. Does Lola get what Lola wants? Does she even know what it is she wants? In conventional society as a whole it is frowned upon for a situation like this to take place…it doesn’t meet their set of standards. So this is a story that breaks conventional society standards. I personally have lived by the rule if it works for you and you are not hurting anyone then go for it. Jenika Snow heard me and this story must have been her reply. I have always loved the bad boys and Ian and Max put the Bad in Bad Boys, so you have to fall for them. Their love of Lola reforms them. I thought Lola in many wasys needed to grow a stronger back bone, but I too have bended to keep my job…so I would have a roof over my head. Sometimes you have to forgive someone just to keep peace in the home. That is my only complaint on this story. The pacing is fast moving. And like I said, if Lola had a bit of a backbone I would have enjoyed it even more. This story reminds me that the idea of being rich is not always in how much money you have or the amount your possessions are valued at. Our greatest possession is the love of those we surround ourselves with. Thank you Ms. Snow for reminding me of that.

Dominated by the Billionaires by Jenika Snow