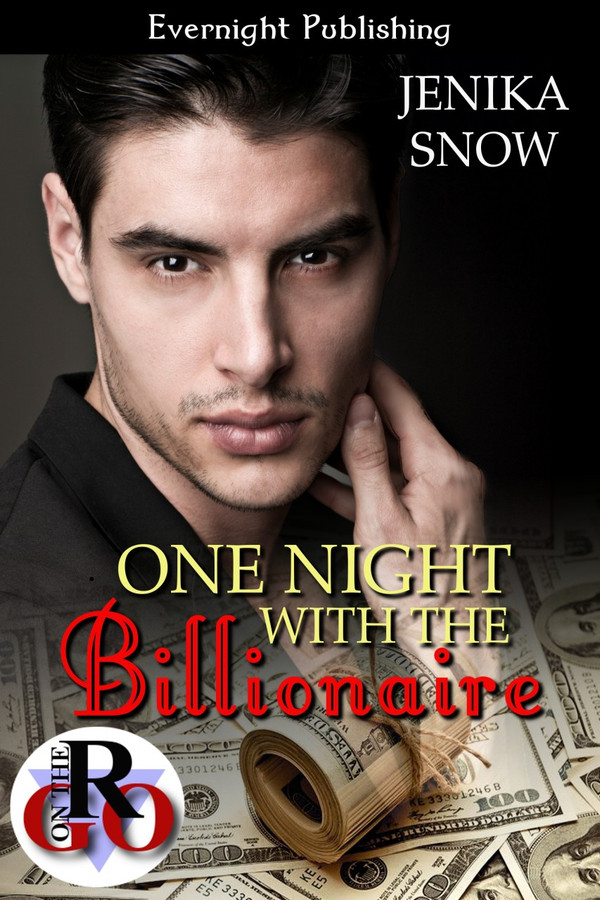 Linden Jacobson has lusted after her billionaire boss since she started working for him. The only problem is Luca Harlow doesn't even know she exists—that is until she works late one night and comes face-to-face with the powerful CEO.

What Luca propositions is one night of uninhibited, no strings attached sex. It seems easy enough, but will Linden be able to keep her emotions in check once she is naked and under her very dominating, very controlling boss?

The sound of tearing fabric flushed away the hazy arousal that Luca brought out in her. It was then that she realized her panties were in tattered remains on the floor and Luca’s hot, wet mouth was latched onto her pussy. His tongue, slightly rough from his aggression, tormented her great sweeping waves and his hands were smooth as he caressed her hips. Curling his fingers around her hipbones, he pulled her back, forcing her more firmly onto his assaulting mouth.
“So smooth and sweet,” the rough growl of his words sent a spear of carnal pleasure straight to her clit. “You’re full of surprises aren’t you.” It wasn’t a question, but more of a heated response. Was he that surprised that she shaved her pussy?
He pulled away and ran his finger along her slick folds. “Do you keep your plump little cunt bare for other men?” He growled the question at the same time he thrust one of his long, thick fingers into her pussy. Immediately her body sucked him in, drawing the digit deeper and deeper. Fucking her pussy in slow steady thrusts, he used his other hand to smooth over the mound of her ass and give one cheek a squeeze.
Smack!
“Ahh.” He smacked her ass again and his tongue lapped at her clit.
“Answer me!” He growled against her slippery slit. He took one hand and placed it on her quivering belly and slid his other hand over her ass and rested it at the base of her spine. Pushing her forward with the hand on her back and pulling her back with the hand on her belly, she was forced to take a step away from the wall and bend forward. His hand on her belly splayed across the entire area, causing heat to seep into her and warm every part of her body.
His demand that she answer him wasn’t lost on her, but for the life of her she couldn’t find the words to respond. His chest covered her back and she felt his bare skin on hers. At some point he had gotten rid of his clothing, pants included. The heavy length of his now erect cock slid against her slick cleft, teasing her with the promise of what the night entailed. The tip of his shaft rubbed her clit every time he shifted.
His breath blew the tendrils of hair by her face and a gasp left her, almost afraid of what he was going to say. His words, whispered low and husky, slid across the side of her face. “If you knew what was good for you, Linden, you’d answer my question.” The hand that spanned her belly slid up her ribcage and covered a breast. His forefinger and thumb found her sensitive nipple and started tweaking it. Pulling the tissue away from her body at the same time, he rolled it between his fingers, Linden found herself biting her lip to hold in her moan. The taste of blood hit her tongue and it was then she realized she had bitten her lip. It was pleasure mixed with pain, agony mixed with ecstasy.
“If you want my cock inside of you, you’ll tell me if you keep your pussy bare for the men you fuck.” He applied more pressure to her aching nipple and then curled his hips forward, bumping her clit once again with the root of his erection. With the dual sensation, her legs started to shake and she feared she would collapse.
Smack! Smack!
The double spanking coupled with his teasing fingers and thrusting hips had an unexpected orgasm creeping up, but before it could wash through her he suddenly pulled away and she was left feeling bereft. Resting her head on the wall in front of her, she didn’t even bother asking why he stopped, or seeing where he went. His hand was back on her ass, smoothing the pain away.
“Answer me,” his voice seemed to be everywhere, or maybe she was just losing her mind from the pleasure he was slowly killing her with?
She licked her lips and blinked her eyes open. “Yes and no, sir.” It was a confusing answer, but it was the best she could come up with at the moment. When he didn’t respond she inhaled and tried to clear her jumbled mind. “I shaved it once, for a guy, but when I stopped seeing him I continued to keep it bare because I like the way it feels.” She was vaguely aware of the sound of something crinkling behind her and then she screamed out in ecstasy as Luca shoved his cock in her pussy. It was so unexpected, so intense that her knees buckled and she started to go down.

One Night with the Billionaire is a novella that will have your panties on fire. Luca is a sexy billionaire with a hard and rough personality, but surprisingly attentive and understanding when it comes to Linden. The sexual chemistry will have you fanning yourself and the details will have you needing some ice water to cool you down. This is a 4 rating because there were a few grammar and editing errors that could use cleaning up, and there were a couple parts that didn’t make sense and didn’t flow well. The character development was done just enough to form the emotional connection needed for this quickie to work…and boy did it work!

Dominated by the Billionaires by Jenika Snow