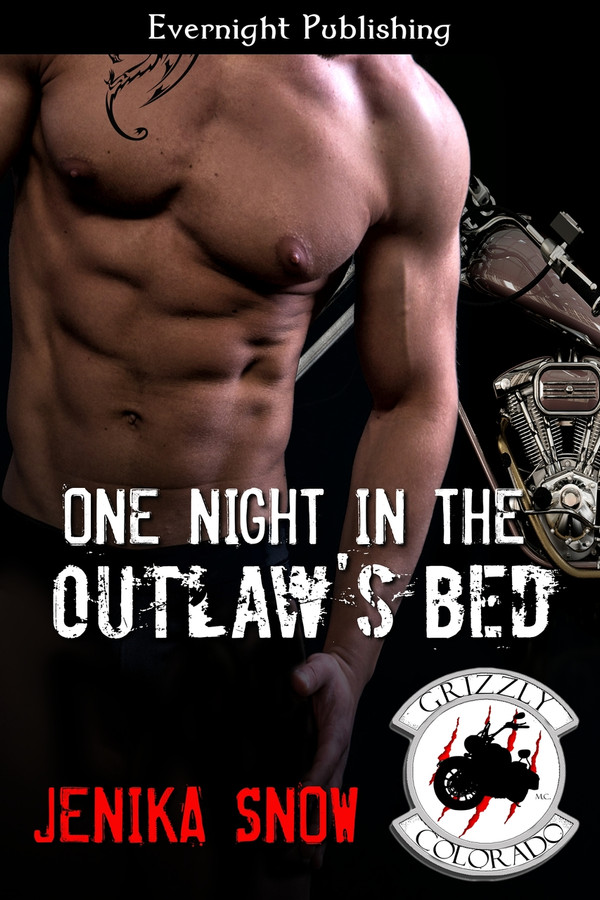 Maggie Drake has lived around the Grizzly MC her whole life. She is not a stranger to the violence, sex, or drugs that are part of that lifestyle. Maggie is also in love with the Grizzly motorcycle club VP. But Diesel isn’t a one woman man, and only does random hook-ups with club whores.

Diesel has known Maggie for years, but kept his distance because she is the daughter of an MC associate. When she returns to Steel Corner he can’t help but want the woman she has become.

When another Grizzly club member shows an interest in Maggie, Diesel must stake his claim. But when he has Maggie in his bed their one night ends up with her pregnant. Can Diesel step up and take care of Maggie and their child? And can he help protect the club when a new MC enters Grizzly territory?

Her words snapped something inside of him, and he reached out and wrapped a hand around her hip, yanked her forward, and claimed her mouth. He fucked her between the lips with his tongue, fantasized that he was doing the same between her legs, and knew it was only a matter of minutes before he really lost fucking control and had her. She had her hands buried in his hair, and she tugged on the strands until the tie at his nape came undone. He didn’t think she realized the little mewls she made. He broke away, trailed his lips down her jaw and to her neck, and scraped his incisors over her flesh. A gasp left her, and he knew he hurt her, but she didn’t push him away. In fact she wrapped her legs around his waist, pressed her heels into the small of his back, and pulled him closer. She scored his back with her nails until he hissed against her neck, but fucking hell the pain felt good.

“I want you so fucking badly, baby.” He moved back up her neck and took possession of her mouth. “Give yourself to me.”

“Yes.” That one word was murmured against his mouth, and she surprised the hell out of him by reaching between their bodies and stroking his dick from root to tip.

Gritting his teeth through the exquisite pleasure she caused within him, he pulled back and looked down to watch what she was doing. His dick was so close to her pussy, and if he just pushed his hips forward an inch he could easily slide right into her body. Wrapping his arms around her shoulders, he easily lifted her, and although it caused her hand to fall away from his dick it brought her chest right up against his. Diesel turned, but she pressed her mouth to his, momentarily stunning him and having him stumble forward. He slammed into the wall, and the cold of the wood seeped into the bare flesh of his back. Turning around so Maggie was the one now pressed against the wall, he hissed out when she tugged on his hair especially hard.

“I’m the one in fucking control.” He growled out the words, but she was too far gone in her lust to fully understand. That much was clear on her face and from the scent his bear picked up from her. She was his, all of her, and there was no stopping this. The sight of her looking so deliciously disheveled and the scent of her cream covering her pussy, had his bear pushing forward that last inch, breaking to the surface, and roaring out in triumph over the fact. He was still in his human form aside from his claws and incisors, but it was his inner animal that was taking control. Without thinking, and just reacting on the need to feel her clench around him, Diesel reached between their bodies, took his dick and lined it up with her hole. She didn’t stop him, didn’t protest, and instead moaned out for more. She was just as high off of this as he was, but he wasn’t a human thinking rationally now. He was an animal needing to fuck this female so thoroughly that there wasn’t any part of her that wasn’t marked by him.

Can you have a one night stand with someone you&#039;ve known most of your life? Not bloody likely. But then, neither Maggie nor Diesel wanted a one night stand. They&#039;ve wanted one another on the down low for years. So down low they didn&#039;t even know the other felt the same. Loyalty and unspoken rules kept them apart, but push comes to shove for Diesel and then he decides to flaunt all convention and go for what he really wants. Kudos to Diesel, but seriously! Did he have to be a man whore in the meantime? Yes, people have sex before committing to &quot;the one&quot; but he kind of went overboard just a tad. But alternately, who could blame him? Naked women are part of the décor at a MC Clubhouse apparently. Maggie is back in town under a cloud of darkness feeling that she has failed at life. But when she and Diesel hook up, its obvious she&#039;s right where she needs to be. The chemistry with these two was off the charts, and the unexpected pregnancy brought out a softer side to Diesel. His going to her dad and talking man-to-man about his feelings melted me totally. Sure their lives are dangerous and moderately illegal, but they have values and loyalty. Can&#039;t wait for more.

I must confess that I’ve become somewhat addicted to Jenika Snow’s Grizzly MC series. I love these books about alpha men and the women who bring out their softer, caring side. So when the third book, One Night in the Outlaw’s Bed, was available to read, I jumped at the chance. I am so glad that I did because this is another great addition to this already wonderful series. This time around we meet Diesel , the Grizzly MC’s Vice President. Diesel is attracted to Maggie Drake, but he considers her off limits. First of all, she is so much younger than he is but most importantly, she’s the daughter of a Grizzly associate whom Diesel respects too much to mess with his daughter. But the heart wants what the heart wants and Diesel’s wants Maggie. He tries to stay away but after losing his temper when another Grizzly member talks smack about Maggie, Diesel gives up the fight. Maggie has wanted Diesel for a very long time but figures she never stood a chance. When Diesel shows up on his bike one night, she decides to go for it. Well the chemistry between these two is a five alarm. They can’t keep their hands off each other no matter how much they might try. Then life throws them a curveball with a surprise pregnancy. Now Maggie wonders if she and Diesel can have their happily ever after. Diesel was an interesting character. I completely understood his concerns about getting involved with Maggie and the fact that he had those concerns just made me love him even more. It showed his sweeter, caring side. Maggie is one lucky lady to have the love of a man like Diesel. I love the effect Maggie has on Diesel and can’t wait to see how fatherhood changes him even more. The storyline was pretty typical for the Grizzly MC series. My only real complaint is that the story seemed a bit rushed and ended rather abruptly. I realize that the book is a novella and only so much can be squeezed into 100 pages. And I did enjoy One Night in the Outlaw’s Bed, but felt the first two books offered a more complete story. Also, don’t be surprised that very little focus is on the paranormal. This series focused on the relationships between the hero and heroine while the hero’s shape shifting abilities is really an afterthought. But since it’s the relationship that interests me the most, I’m totally okay with this. Each book in the series can be read as a standalone but if you read all the books than you have a better understanding of the secondary characters. With so many wonderful characters to keep track of, I can’t wait for the next one in the series.

I have to say, this was the first MC romance I&#039;ve read, and it was so HOT. I&#039;m a new Jenika Snow fan. She did an amazing job of writing gritty characters that underneath were still very likeable and sweet. And the sex scenes were off the wall scorching and sexy. Definitely a must-read from this fellow Evernight author!

This was a good story about Maggie and Diesel. These two had known each other before Maggie left town. Diesel turned out to be a really good guy.

The Outlaw's Obsession by Jenika Snow