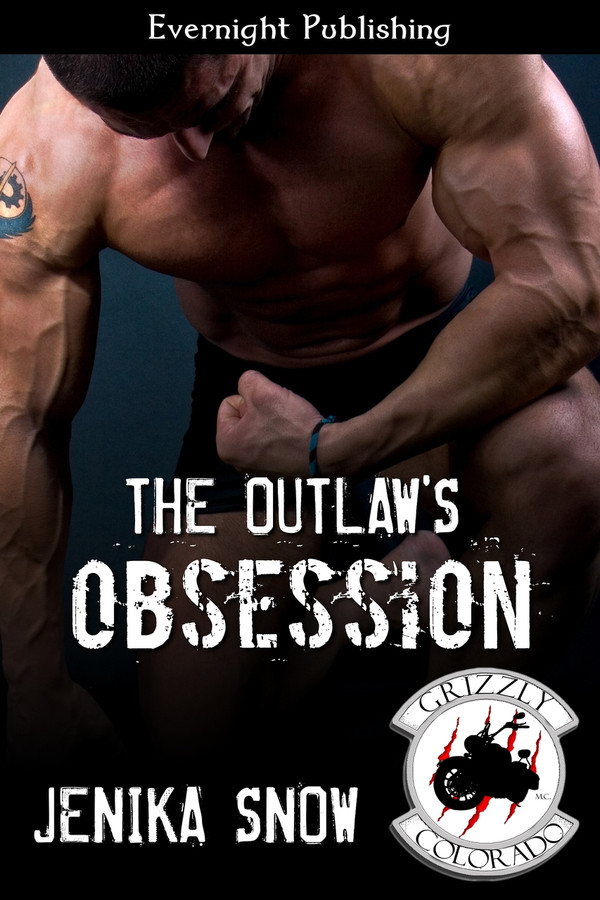 Tallin "Jagger" Landon isn't a good man. In fact, he isn't a man at all but a bear shifter and the president of the Grizzly MC. When he takes in the wounded female of a rival MC, retaliation from that club is inevitable. But Jagger doesn't expect to be so territorial of a female that isn't even his.

Sonya White is desperate for a way out, and will do just about anything for her freedom. Taken as a teenager by Trick, the Wolverine MC president, she has been the sexual plaything for the sadistic shifter for years. But the drama keeps unfolding with the dominant and possessive Jagger declaring Sonya is his, and a jealous club whore and Trick coming back to settle the score. Sonya can either run from the MC life or let Jagger claim her fully like he demands.

The prospect eyed her up and down, and she covered her chest with her uninjured arm. She may have clothes on, but she had been eyed up and down enough times in the last seven years to know when a man did that to a woman it was like they could see right through her clothes.

Before she could move, and before he could make contact with her someone grabbed her around the waist and very gently moved her behind them. But she knew it was Jagger before she saw his face. The scent of him filled her nose. He smelled like clean sweat, motor oil, and leather, and although those three smells may not have been the most appealing to a woman, to Sonya the combination made her wet, embarrassingly so, and very out of place given her history with Trick and his club. Sonya didn’t want to think too deeply on why this man, this Grizzly MC president, had this kind of effect on her. She took a step back when she saw Jagger take one forward. The heat that came from him was intense and powerful, and she could practically feel his rage fill the air. The hair on her arms stood on end. In the next second he slammed his fist into the prospect’s face, and before the other guy went down Jagger had his hand wrapped around the other man’s throat. He lifted him in the air until his feet dangled from the ground. God, Jagger made the other man look so small and weak. She didn’t know what was happening and felt helpless amidst all of the testosterone and anger suddenly pumping through the room.

“I better never see you fucking put your hands on her.”

Sonya heard the prospect gurgle, as if trying to say something after Jagger had spoken.  Jagger tightened his hold on his throat. Several other men rushed up.

Jagger held his hand out to stop them without taking his eyes off the man he held in a death grip. “Don’t look at her. Don’t speak to her.” Jagger leaned in so they were nose-to-nose. “Don’t think about her, and never, never fucking touch her. Do you understand me?” His voice was low and harsh.

She found herself backing away, but didn’t get very far. She slammed right into a very hard wall, or should she say a chest that felt like a brick wall. Turning and looking over her shoulder, she had to crane her neck to see the man standing before her. His face showed no expression, and the jagged scar on his cheek had her swallowing the lump in her throat. The corner of his mouth lifted in a humorless sadistic smile. The way he looked at her seemed almost curious, but then he took a step back, looked over at Jagger, and then turned and disappeared down the hallway. A low growl had her looking back at Jagger, and she watched as the prospect clawed at the thick hand on his neck.

Jagger tossed him aside as if he were nothing more than a ragdoll, and the prospect scrambled off the floor and out of the clubhouse. For several seconds it seemed all activity in the room stopped. The music still pumped loudly, and a look at the couch showed a few of the bikers sprawled out with almost amused expressions on their faces. A man walked up to Jagger, and she saw the patch on his cut that told her he was the VP. The vice president said something to Jagger, but he spoke too low, and the music was too loud for her to hear anything. Jagger nodded sharply and turned to face her. Sonya’s heart was beating fast as she stared at him. There was something in his eyes, something frighteningly possessive and animalistic, that had her feeling as if she might spontaneously combust right then and there.

Jagger is the president of the Grizzly MC’s and he has all the women he wants. Life is good until the day he finds the one woman who makes his bear sit up and take notice, but she is on the run. Sonya has spent the last seven years prisoner to the maniac who killed her parents. She is determined to escape, dead or alive, but runs right into the arms of another alpha male. Strangely, the alpha male does not scare her, but, in fact, makes her feel more than pain or degradation. Jagger and Sonya are both confused by the strength of their mutual attraction. The electricity is so strong, both will have to change their lives or forever live a half-life. Betrayal will drive home the need to be together, but will they both survive the coming battle? Jenika Snow is an extremely talented writer. She provides a new spin to the MC lifestyle and drags the reader into “It’s a Wonderful Life,” MC style. I fell in love with all the characters of the Grizzly MC club and look forward to return adventures. I highly recommend Jenika Snow and the Grizzly MC series. - See more at: http://coffeetimeromance.com/BookReviews/theoutlawsobsessionbook1byjenikasnow.html#.U5NE1-go5dh

I loved this book. It had everything needed to make it a fantastic read. A rough biker that happens to be a bear shifter are my two favorite types of books. It was simply icing on my cake that my biker/bear was paired with a strong heroine that I liked. Jenika Snow threw in a great plot that was loaded with action to hook me hard and fast. Some parts of the book were emotional to read. Sonya had a tragic life until she was rescued by Jagger. I liked her because she never lost hope that she would get out someday. She never stopped fighting and did what it took to save herself. She was also smart and wasn’t fooled by anyone. That’s the kind of heroine that I love to read about. I absolutely adored Jagger. He was an alpha bear with his bad ass ways. He could be violent and crude, after all this is a biker club. Yet, he handled Sonia with gentleness and understanding. It endeared him to me even more. So now let me say that this book had a fast paced plot. It flowed well and was easy to read. There was no putting it down for me. It had plenty of danger and action to keep things interesting. There was violence and drugs. It was a gritty drama with fascinating characters. Erm…the sex scenes were hot! Yes, I loved that too. Lastly, it was exceptionally well written. The Outlaw’s Obsession was put together very nicely and ended up being one of those books that I couldn’t put down until the end. I can’t wait for more books in the series.

This was a really good book! It was a fast read and I couldn&#039;t put it down. Sonya was such a trooper through everything and Jagger was so much more than I first thought.