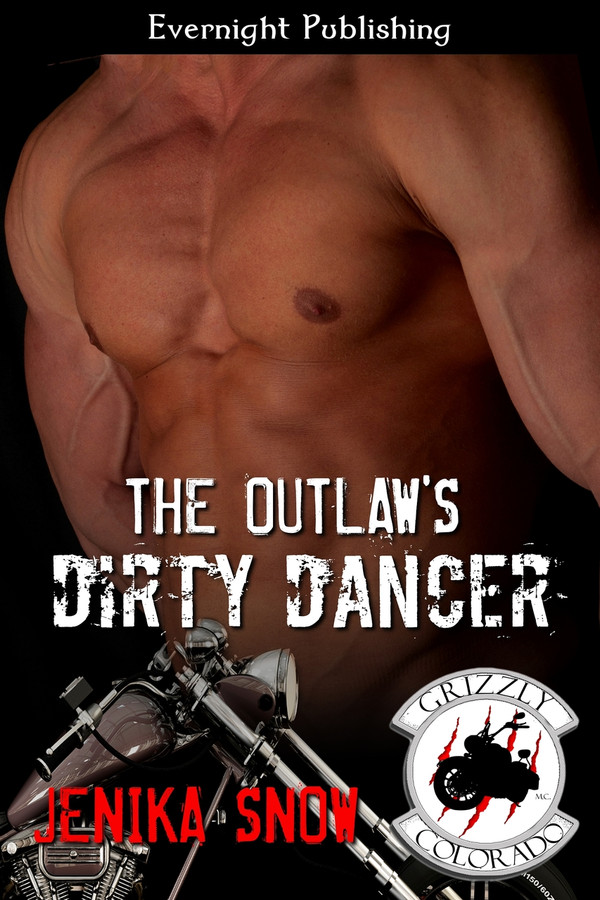 Brick, a bear shifter and the Sergeant at Arms for the Grizzly MC, is a recluse and bastard by all accounts. With an ugly past, and a scar to match, he is content with using club whores to pass the time. But then he sees Darra, a stripper and the only female that makes his cold, dead heart beat again.

Darra Strand has a past filled with emotional and physical pain, but she is stronger because of it. When someone threatens her, a savior comes in the form of an angry, scarred, and heavily muscled biker named Brick.

But when the MC has to go on a run out of state to help another charter, Brick is forced to leave Darra behind. A club rival decides the time for retaliation toward the Grizzlies has come. But Darra is Brick’s and anyone that hurts her is as good as dead.

Brick slammed Darra against the wall of his apartment and took her mouth in an all-consuming kiss. They had left dinner behind at the bar. After the kiss she had given him, and her words of how they needed tonight to forget about the pain and their past, Brick had taken her back to his place.

He speared his hands in her hair, tugged at the strands hard enough that she was forced to tilt her head back and accept his hard kiss. But she gave as good as she took, and the sting of pain from her biting his tongue and lips, and the burn of her nails digging into the bare flesh of his biceps, had his cock getting so damn hard that it hurt. He groaned against her mouth, and a grunt left him when she bit him hard enough that the metallic flavor of his blood slammed along his tongue. He pulled back, and took in the sight of her mouth. Her lips were parted, swollen and lightly colored with his blood. He leaned in and swiped his tongue along the bottom swell of her lips to lick it off.

“I should go slow and easy with you.”

She was shaking her head before he even finished talking. “I don’t want slow and easy. I want it rough and hard, and I want to feel like I am the only one for you. I want my memories to be consumed by the sight, smell, and feel of you.” She leaned in this time and tugged at his bottom lip with her teeth. “I want to forget about everything that doesn’t concern what is happening right now.” She pulled back, and the hard look in her eyes told Brick that his female was strong. “I want to replace my nightmares with memories of you. Can you give me that, Brick?”

They were both breathing hard and fast. He moved away only long enough to reach behind her, curve his hands under the crease of her ass, and lift her so she was forced to wrap her legs around his waist. But he wanted her naked, now, and under him on his bed.

Brick turned around and strode down the hallway and toward his room. Once inside he slammed the door closed with his foot and set her on the ground. His bear wanted out, paced back and forth, clawed at his insides, and needed to feel Darra to writhe beneath them. He was a hungry bastard, but the only thing that would sate his appetite was her. He was about to fucking have her in every way imaginable. But before he could even tell her to take her clothes off, she was stepping up to him and pulling off his cut. Before it fell to the ground he grabbed it and set it on the dresser. Then she went to work on his shirt, and as much as he wanted to rip their fucking clothes off and plunge his cock right into the hot depth of her pussy, he let her take this one moment of control. And that was all it would be, because once they were naked and she was on his bed, Brick was going to devour her.

Dark and gritty is how this book starts. Darra is a stripper being harassed, and Brick steps in to help her. One moment in time and their lives are changed forever. Darra is a giving soul and is stripping due to financial circumstances. A circumstance that can probably be traced back to many a stripper. When she invites Brick to her apartment to patch him up it&#039;s a leap of faith the likes Brick has never seen, let alone been the recipient of. Brick is stoic and is frequently described as not showing any emotion; that doesn&#039;t mean he doesn&#039;t have any. Darra had a harsh upbringing and is still trusting even though that trust was abused in the most horrible of ways. And those things draw them closer together. Brick is upfront and honest and it draws Darra to him instead of pushing her away. I liked that. Brick doesn&#039;t say much, but when he does it&#039;s either meaningful or dirty. I liked that, too. Very sexy and steamy, and the added shifter element made it a little unpredictable. The heightened senses and physical attributes added an element of danger, but didn&#039;t overpower the overall story. Good world building and a nicely flowing story that illustrated that while sexual chemistry can attract, it&#039;s love that is the glue that holds a couple together.

I am crazy for this series! The Outlaw’s Dirty Dancer is the second book in the Grizzlies MC series. It is yet another great read from Jenika Snow. This book is set within a thrilling world of bad ass bikers who happen to be shifters. That’s a winning combination for me, and let me tell you that I loved it. There’s just something about a bad boy that makes me hot. I knew I was going to love Brick and I sure wasn’t wrong about that. as they come. He had a darkness inside him that had him wanting to run in the other direction as soon as he recognized that Darra was his mate. At first he felt that was the only way to protect her from his dark desires and from the danger their relationship would bring. Yet he already felt possessive of his woman and he couldn’t stay away. Now, I’ve read quite a few of Jenika Snow’s books and there are a few things that I have come to expect. Number one would be the amazing sex scenes that were apenty in this book. Ohh La La !!! That Brick was one sexy, dirty talking bear. He was completely dominant in bed and it’s no big surprise that Darra loved it. They had a great connection that felt right to me. The second thing I had anticipated was that there would be some suspense thrown in to keep me on the edge. This author doesn’t disappoint as the danger inevitably found Darra just like Brick feared it would. The third thing that I expected was that the writing would be pretty much flawless. Again Jenika Snow never lets me down. It’s one of the reasons why I enjoy her books so much. This was a very well written and satisfying read. It was fun to read, so I read it in one sitting. Fortunately for me there’s more fun to be had with an exciting cast of characters left to explore. Now I am ready for the next book in the series !

It can’t be easy to make a stripper and a man who has killed people into sympathetic characters that you care about. Yet that’s exactly what Jenika Snow did in The Outlaw’s Dirty Dancer, the second installment in her Grizzly MC series. In fact, I loved these two characters so much that I didn’t care about their past, only their future which is only because of Ms. Snow’s amazing writing skills. Brick is a shifter bear and the Sergeant at Arms for the Grizzly MC series. He is not a soft man and prefers being alone than dealing with people. His past is ugly and is reflected in the huge scar on his face. But one night everything changes when he protects a stripper from a customer. Darra has had a very tough life. She is trying to make things better but falls into stripping as a way to make money. She doesn’t trust easily but there’s something about Brick that calls to her. In the Grizzly MC series, Ms. Snow takes strong, alpha men and shows the lengths they will go to in order to protect the woman they love. I found it fascinating how Darra’s mere presence soothed Brick. Being around Darra made Brick a better man and he recognized that. The best relationships are the ones where each person brings out the best in their partner and that’s why I found myself rooting for Brick and Darra. Darra was also a fascinating character. Life had dealt her a pretty crappy hand but she didn’t left it define her. Instead she took control of her life and tried to improve it with every choice she made. The decision to become involved with Brick wasn’t easy but the good far outweighed the bad. The chemistry between the two jumped off the pages and I found myself holding my breath waiting for them to make love. And when they did? Wow, my fingers were burning just holding my e-reader. Brick is not a gentle lover but Darra held her own. Their lovemaking was exciting and filled with passion. I love the community that Ms. Snow has established in this series. It was good to see Jagger again and we were introduced to more guys that I am certain will merit their own love story. The Outlaw’s Dirty Dancer is not a very long book coming in at a little over 100 pages. Yet, Ms. Snow packed in everything you could want in those pages. There was enough drama to keep me turning the pages. In fact, I read it in one sitting because I lost all track of time as I immersed myself in the Grizzly MC World. Luckily there are other books in this series. If the first two books are any indication of how good the series is, then I can’t wait to read the others.

I enjoyed Brick and Darra&#039;s story. These two both had dark pasts, but were able to overcome them. This was a shorter story and very easy to get through in an afternoon.

What can I say about Jenika. She is wonderful in telling her stories about strong alpha males(In my Brick voice) and the strong heroines who love them. Brick is a brooding but caring shifter male who is what he say he is and there&#039;s no apologizing for that. Darra is a woman who has been dealt blow after blow and refuses to let it define who she is and what she will become. I love the Grizzly MC&#039;s and can&#039;t wait to see who is next in this spectacular cast of characters.

The Outlaw's Obsession by Jenika Snow