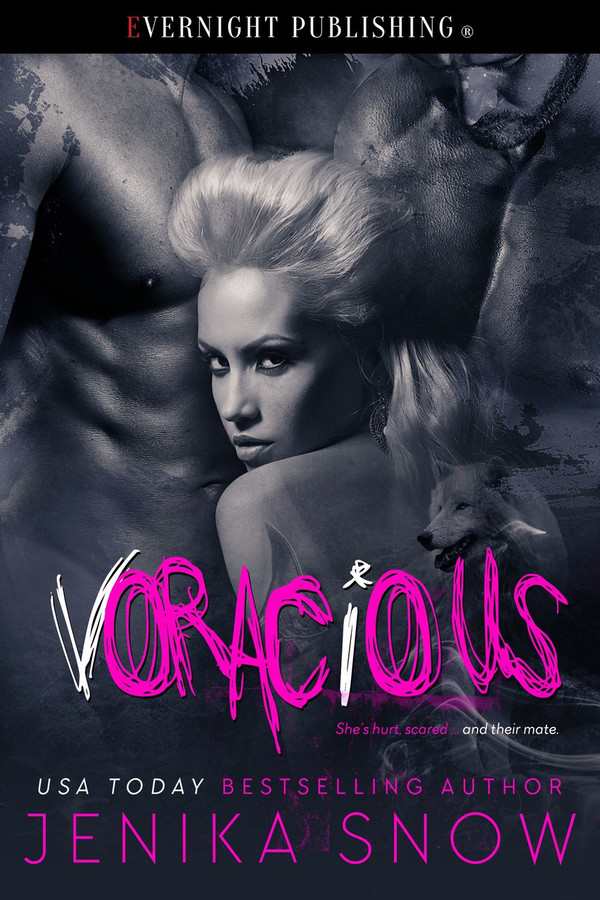 After leaving their community due to an altercation with their shifting council, Alric and Sam, wolf shifters and mates, start their new life on their own terms. But when Dalia, a lost and injured female wolf shifter, pleads for help on their doorstep, the two wolves know they can’t turn her away. She’s hurt, scared...and their mate. With Dalia under their care, it takes everything in their power to curb the beasts inside that demand they claim her.

Running from an abusive past, Dalia will take help in any form. When she finds a cabin in the middle of nowhere, she hopes the inhabitant is her salvation, at least for the time being. What she didn’t expect to find were two savagely attractive wolf shifters who are her mates. As she heals physically and mentally, she finds herself not wanting to fight the powerful pull her mind and body have toward the two males, even if her past could destroy everything.

“I love the way you taste,” Sam said, his words muffled and husky with arousal. “I won’t get enough of you.” He ran his tongue over the pulse point right below her ear, and she shivered.

Before she could say anything in response, if she could have even found her voice, Alric latched his mouth onto hers. He cupped each side of her face and tilted his head farther so the kiss deepened. She moaned into his mouth and pressed her ass back, loving how Sam’s hard cock jerked with need. Both males growled in approval, the sound so primal and demanding that she felt completely feminine in their embrace.

As one unit they moved back until she felt the warmth of the fire grow hotter and surround her. Alric broke the kiss, and they both panted as they stared into each other’s eyes.

“Are you sure you want this, want us to go further?” Alric asked.

She could only nod.

“Because once we start we can’t stop,” Sam said against her nape.

This is a hot mmf book I did enjoy it and I loved how loving Dalias mates are.

A Happy Ever After…. Voracious was a story line that I have read before but with the nice surprise of having characters who are memorable. This is a short story, very well brought together and kept me in the story until the end. One thing that captured me is that this book sounded like a series, but unfortunately, it is not. The main thing that kept this from being a truly fantastic book is that the background story seemed incomplete. I wanted to know more about how Alric and Sam came together and more about the pack they came from. When Alric and Sam, mates and lovers, find Dalia in the front of their doorstep they’re surprised. They finally found what has been missing all these years. But their mate is in danger. The story quickly evolves but, for me, it was the perfect speed for a short story. Alric is the Alpha and Sam the submissive in the relationship, however the relationship between them morphs into both of them becoming protectors with a few other surprising changes. The passion and chemistry between all of them was off the charts hot! Try this one if you like a short paranormal erotic story with a bit of suspense and romance.

Alric and Sam are lovers, mates. They also happen to be wolf shifters. Alric is an Alpha who is feeling restless and tired of being told what to do by the pack. After meeting with the council, he and Sam are free to strike out on their own, and settle in a cabin on a strip of land. During a snow storm, they find a body out in the snow. It’s a young woman, almost frozen, and she’s been hurt by someone. But, their wolves know their mate. Dalia Cooper is on the run from hunters and an abusive alpha who would stop at nothing to have her back. As much as she feels the mating call between her and the two sexy wolf shifters, she doesn’t want to put them in danger. Alric and Sam want to show her what protective, loving mates would do to protect her. This was an enjoyable book, and I’ve always loved Jenika’s stories. This is fast-paced and the sex scenes are hot, especially for fans of M-M-F books. I received this ARC in exchange for an Honest review.

Sam ,Alric and Dalia were great .Really enjoyed this story. Love and overcoming hurt. With a HEA what more could a person ask for.

Yummy MMF shifter story from the steamy writer Jenika Snow. Sam and Alric are wolf mates and they are happy with eachother. They decide to leave thier pack and start life on thier own terms. Along comes Dalia a injured female shifter who is also mate to Sam and Alric. Dalia has been abused her whole life and is on the run until she stumbles across her mates. Right from the very beginning there&#039;s lots of steam. Expect to need to change your batteries and panties after reading this story. I loved every minute of this short amazing story. Once again Jenika Snow kept me up fantasizing about alpha shifters and the hot things they could do to me

Previously published under the title Savage. This book has been revised and re-edited and re - released under a different publisher. Well Jenika does it again not only do we have sexy alpha male shifters becoming mates, but a steamy triad, emotions, love and a psycho baddie that the good guys have to deal with. Although this is a shorter read it is packed with passion and action and absolute deliciouusness that I for one could not get enough of! Yes there is M/M action along with M/F and M/M/F This story has it all and written in a way that leaves you fanning yourself as you turn the page! Another hit loved it the first time and even more this time around. The chemistry and passion between Alric, Sam and Dalia is wonderful and I could not get enough. Wish it was longer but was really pleased with what I read as you will be too! Happy Reading !

Alric and Sam are mates that want to leave their pack to have a life of their own. Dalia has lived a nightmare, until she escapes. Outside the front door, Alric finds Dalia freezing and passed out. They know there is something special about her and want to bring her back to health. Dalia doesn&#039;t know what to make of Alric and Sam being her mates. She has never had men treat her with love and it&#039;s all foreign to her. Evil comes knocking at their door wanting to bring Dalia back where she came from. Will Dalia get the HEA that she so deserves? Can Alric and Sam save her from her past? I really enjoyed this book. I&#039;m hoping there will be a book 2.

Alric and Sam are wolf shifters and mates who decide to leave their pack and be on their own. Moving away was hard but was something they wanted to do so when they hear something thump against the door during a blizzard, they are curious. To their surprise, they find Dalia, their third. She is running from an abusive wolf shifter who raped her and made her pregnant. Together Alric and Sam bring her in and start taking care of her. As time goes by, she starts falling for them and they all form a trio, but Dalia&#039;s past catches up with her and it&#039;s up to her to save herself, her unborn baby and her two mates. The story keep me engrossed from the beginning and I found myself wanting to be her! Wonderful book and since I hadn&#039;t read it the first time around, it was all new to me.