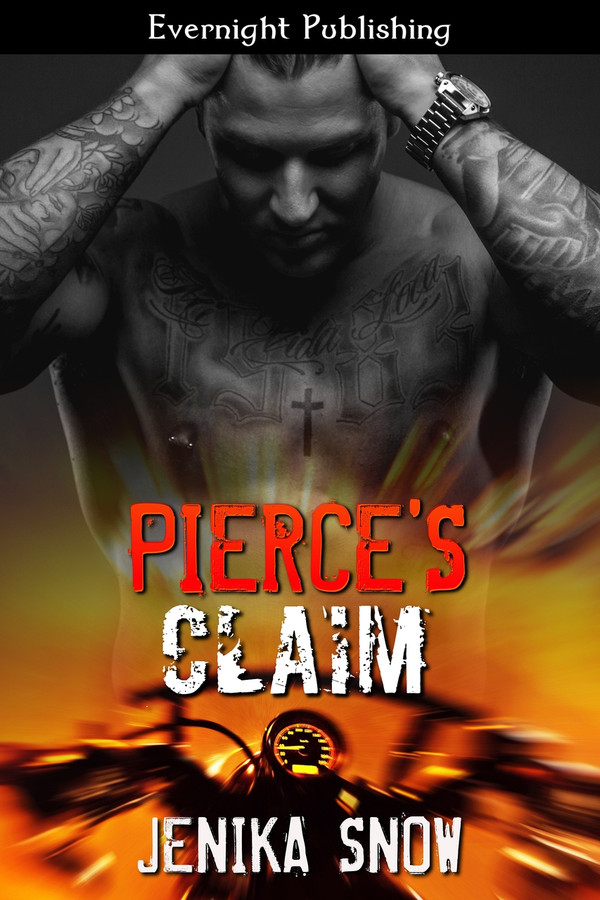 The Brothers of Menace MC, 6

Lil has pretended to be someone else, all for the chance to feel alive. But then Pierce comes along, tatted up and pierced in all the right places, and she feels like she doesn’t have to pretend anymore. It arouses her, excites her, but most of all it frightens her.

When Pierce saw Lil he became obsessed, but when the truth about who she really is comes to light, the situation becomes more complicated than he ever anticipated.

Still, Pierce doesn’t care if Lil has connections with the Brothers of Menace. He will have her, even if that means going up against a fellow Brother for the right to claim her.

With a threat still hanging over the Brothers, the conflict of Lil’s ties to the MC, and Pierce’s need to just take her and forget about everything else, he must decide what is really worth fighting for.

They kissed softly at first, his tongue moving along hers gently. She curled her fingers into his body a little harder, pressed closer to him, and this small, involuntary sound left her when she felt the hard definition of his erection press against her belly. He was big, but that wasn’t a surprise given his overall size. Her body trembled, her nipples hardened, and she was wet between her thighs.

Her pussy clenched, hard, painfully, and pleasurably. Everything inside of her screamed that she’d never felt this way about a man, never felt this arousal … not after what had happened. She should just give in, let herself experience this. But Fallina couldn’t. She didn’t want to jump into something, no matter how good it made her feel.

With every swipe of his tongue along hers, every suck he did to the muscle, every stroke of his hand down her back, she felt desire pour through her cells, trying to claim her fully.

He pulled away, still keeping her close, but the contact between their mouths broken. He panted, breathed out heavily, and that hard, steel-like erection was still pressed to her upper belly. He was so much bigger than she was, so much taller. At clearly a foot taller than her five-foot-six height, Pierce was this mountain of a man, this beast made of muscle and strength.

“I want you so badly, but I don’t want to do this right now.” He cupped her cheek. “I want to take you in a bed, with you naked, beneath me, and only your moans and harsh breathing the backdrop.” He leaned down and kissed her again, pried her mouth open with his tongue, and fucked her that way, just claimed her like she’d never been claimed before. “I want to be able to lick and suck at every part of you, drag my tongue over every inch of your body, and show you what it means to be possessed by a man that wants you so badly he could drive a fucking hole through steel with his cock.”

She gasped at the crudeness of his words.

“I should be whispering sweet things to you, bringing you flowers and candy, holding doors open for you and shit,” he said on a whisper against her mouth. “I should be a better man for you, because that’s what you deserve, but that’s not who I am, Fallina.”

She nodded, knowing exactly the type of man he was. “I don’t want sweet things or chocolate, Pierce.” She pulled away an inch and looked up at him. “I want a man like you.”

I have grown to love Jenika Snow’s writing and how she delivers with such a good read. I have never seen the name Fallina in a book before, so being a person with an unusual name I just loved it. Pierce wasn’t half bad either. I haven’t been reading these series books in the order. It hasn’t mess the plot up too much, but I still think it would be better to read them in the order they should be in. I was so taken with this story and how Pierce is willing to give it all up for Fallina. He needs to show how much he loves and cares for her and will help her through her past.

This is the first book I’ve read in this series, and I have to say I was not disappointed. Being a fan of shows like “Sons of Anarchy” helped me fall in love with characters I met in this book. Pierce for me is a loyal brother and knows that this life was a choice he made not one made for him; which for me made me like it even more because there was no angst about his choices in life. Fallina was hard for me to connect with in the beginning because I couldn’t understand state of mind until she talks to Pierce about it. She is in a very dark head space that could make men run the other way or use her, but not Pierce. There love story may have seem fast during the length of the book but it plays well with the lifestyle these men live. When they love , they love hard like with anything in life they know what they want and take it. While I didn’t feel lost reading this book I want to find out more about the other characters mentioned from the previous books. I give this story 4 diamonds and can’t wait to read Rook and Bobbie’s story… Make sure you get your copy today at Amazon or at Evernight Publishing

I love this series and Jenika never disappoints. Pierce was all what I thought and love that these books flow from each other. He was the rough biker with a heart of gold when it came to his woman, well once he had her. Your love this addition and I&#039;m so looking forward to more.

This book was so worth the wait! I loved how Pierce made her feel better about herself and how he fought back for her love. I knew her Dad would accept them together but there had to be a big fight! Lol! Now to wait for Room&#039;s story!!!

Pierce wants Lil. The mysteriously broken stripper that has become his obsession. Little did he know, was that Lil wasn&#039;t a mystery at all. Lil was really Fallina, the beloved daughter of his MC brother Cain. Wanting her could very easily bring him death, but he doesn&#039;t care. He has to have her. Fallina uses her alter ego Lil to help her cope with her past. Every time she gets on stage it takes a little more away from her spirit, but she doesn&#039;t know how to stop. With Pierce by her side, shes able to heal the past and step away from her shame. The only block on the road to they&#039;re HEA is her dad, and what he&#039;ll do when he finds out. I have been chomping at the bit to get my hands on this book since I found out that Pierce was in fact getting his own story. When I realized that a few books back who Lil was I was even more intrigued. I&#039;ve always loved Cain&#039;s character and couldn&#039;t wait for the epic beating that was going to befall Pierce. As soon as I started to read this book, I could see how easy it was for Fallina to let him in and fall in love with him. Jenika once again gets it right. This book is a great addition to the Brothers of Menace series. As always she leaves her faithful readers with a taste of whats to come...Shes a tease like that.

Love biker love stories. Pierce fell hard and fast. Fought for her and won. It was great knowing she went from someone raping her and fighting those nightmares to finding love with a biker has Pierce.

I come to expect amazing things from Jenika Snow and she delivered... I absolutely loved Pierce and Fallina. Her ability to take a bad boy and turn him into a hero is absolutely second to no one... The fact that Pierce caught for and helped heal Fallina is heart wrenching and soothing ...

I can&#039;t tell you how long I&#039;ve waited for Pierce&#039;s book- actually yeah I can, since his first mention! There was something about him, even as a prospect. He&#039;d come forward, go into the background, then he&#039;d be forward again and I found myself reading the other books and grinning whenever he was mentioned. Part of that was the name Pierce. There just HAD to be something to that name and I was right. Plus, when you found out that Lil was Fallina (how cool is that name btw) and Cain&#039;s daughter there was bound to be explosions when that came out. What I also liked was that in the last book, Tuck, we had the scene where Pierce called out to her in the strip joint and she rebuffed him, and when he found out she was Fallina too. At the beginning of the book we go back to those scenes so we know both sides and that was genius. I always thought Pierce would be a bit of a hard nut given how he acted, but he wasn&#039;t and I liked that. There&#039;s a deep side to pierce and he truly loves Fallina. She has a lot of issues because of her past and for once it was the lead female who was damaged deep inside not the male and I loved that twist!! Plus we get to find out more about kinky Rook! Veeeeeery kinky rook. His book promises to be a hot one, but back to pierce. I loved the way the problem between him and Cain was solved and it was a bit of drama that I hadn&#039;t expected quite so soon, but I don&#039;t think it&#039;s over yet. There are bound to be repercussions as a result of M. When I found out Jenika hadn&#039;t intended to write Pierce&#039;s book I was shocked cos he has been so central even as a prospect, so I&#039;m beyond relieved that she did cos I&#039;m not gonna lie- pierce is awesome! I&#039;ve said it before and I&#039;ll say it again, in every series there&#039;s a character that makes you wait impatiently for their story. In this series it was Pierce, in the Grizzlies it was Court, in the junior menace boys it&#039;s Marcus and Mason (2 in one series greedy I know), in the junior Grizzlies I think it had to be Dakota and tawny which was technically a junior grizzly menace book. You get the gist, so knowing that Pierce was gonna hit my kindle at 12 had me doing something I&#039;ve never done- setting a reminder so I didn&#039;t fall asleep. If you&#039;re not sure about the book or series then you really must read it. It&#039;s an amazing series that you&#039;ll reread repeatedly and Pierce&#039;s book was just perfection. There&#039;s no other way to describe it. Would I change anything about it- hand to God no. I just wish we could award more than 5 stars cos it&#039;s not enough!

Claiming What's Theirs by Jenika Snow

The Suit and His Switch Claim Their Sub by Jenika Snow

The Outlaw Stakes His Claim by Jenika Snow