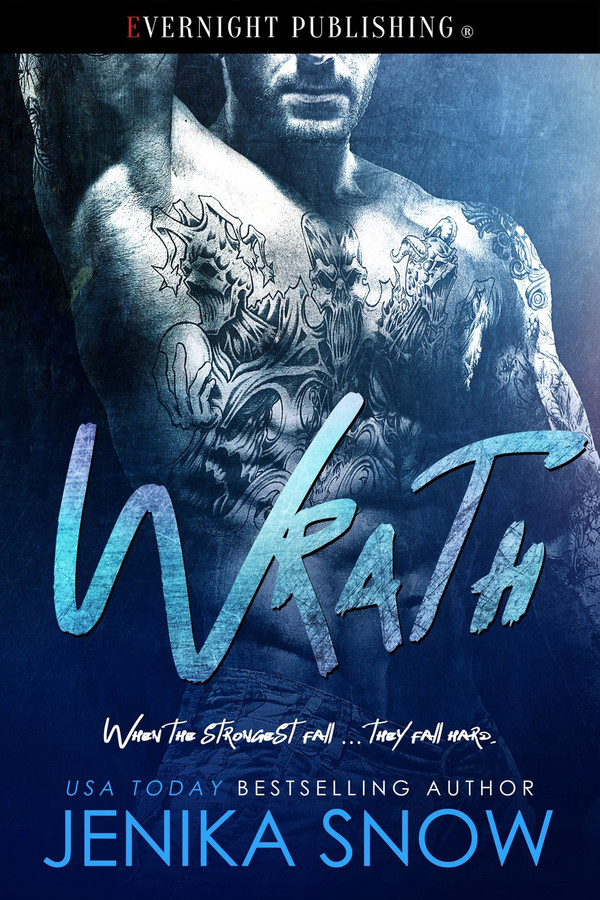 When the strongest fall, they fall hard...

Lila loves Wrath, but circumstances in life weren’t in their favor, and they could never be together. Now a single mother, Lila’s past is behind her and the father of her baby out of her life, and she wants nothing more than to be with Wrath.

There’s no denying they are meant to be together. It goes down to the very marrow. But can these two damaged souls realize the only light they’ll find in their darkness is with each other?

Wrath could have taken her ten times over back at the car, but Lila deserved so much better.

This is a bad fucking idea.

Yeah, it was, because this wasn’t what he’d planned on doing. This wasn’t how he’d seen this night going. He’d planned on telling her he was walking away. Not that he had thought it would have changed anything, but telling her that he couldn’t be around her because he was a selfish bastard seemed like the best route.

I could have just disappeared without doing all of this, cut all ties with her and Tank. It would have saved him from any confrontation, from breaking down and giving in to her.

But when she’d told him she was in love with him, all common sense had left him. Wrath didn’t want to let her go, even if it was the best option for her.

He closed the front door, set the Bentley keys on the table beside him, and stared at Lila. He’d only been about twenty minutes from his house—one of many that he owned. They hadn’t spoken the entire time, but the heat in the car, the arousal he’d felt come from her had been tangible.

She walked around, checking everything out, and he let her. Hell, he was checking her out in the process.

“Your house is incredible.”

His whole life he’d worked for what he had, gathered possessions, ruled over this world he’d created. But when it came to Lila she was the only thing that mattered. At the end of the day this was just shit he’d surrounded himself with to fill this dark, bottomless hole in his soul.

“Come here,” he said, his voice low, husky. He should go slow with her, cherish her for hours, but he couldn’t control himself right now.

She turned around and moved a few steps closer. The images of her on top of him in the Bentley played through his head. She was gorgeous, with her hair now down and hanging around her shoulders, the waves looking messy like she’d had the wind blowing through it.

“It’s only ever been you,” he said, and he saw her throat work as she swallowed. “Come closer, Lila.” She did as he said until she was a foot from him. The air around him was charged, and the scent of her, so sweet, so intoxicating, filled his head. He felt drunk, high, hell, he felt like he wasn’t even on solid ground with her standing so close.

“Wrath,” she whispered his name, and he forced himself not to close his eyes at the sound.

Yummy super bad boy whose been in love with his best friends little sister for years. She&#039;s been in love with Wrath too but neither acted on it so both have suffered. What happens when these two finally get together? Crazy hot sparks. I love nothing better than a Jenika Snow bad boy and I think Wrath is the baddest of them all. This quick short read will leave you wet and panting for more. I loved ever minute of this book. Anything Jenika Snow writes is a must read for me. I can&#039;t wait to see what comes next

We finally get Lila and Wrath&#039;s story. Lila loves Wrath and decides it&#039;s time to let her feelings known. What she didn&#039;t realize was that he is in love with her too. Wrath wants to be there for her and her baby,Faye but he doesn&#039;t think he is good enough for them. He refuses to bring them into his dark world. Lila isn&#039;t going to give him up. Will she make Wrath realize that they are suppose to be a family forever or will he push her away for good? I loved this couple even if I wanted to slap Wrath in his head a few times. lol Can&#039;t wait to read more about Ruin and Dotty!

WOW! Absolutely Brilliant !!!! Also what a fantastic cover! I have long awaited for the story of Wrath to be told and oh how the wait was so wroth it! Jenika Snow has yet again delivered another show stopper! Wrath is a man who lives life on the edge, is far from a choir boy and filled with the demons of his childhood. But he has strived to move forward from his shell of a childhood to become the feared underworld boss that he is today. The only thing that has never altered or wavered but grew stronger are his feelings for Lila his best friend, Tank / Brendans younger sister. This story is filled with love, emotion, feeling and a chemistry that could never be broken and shows that true love can conquer all if you let it and just because you may think you are not worth the pain those that love you will always want you regardless of anything else. Love is all that matters I really enjoyed every moment of this book and devoured it from start to finish. To appreciate it and its characters fully I would suggest that you read Tank&#039;s Property book 8 of The Brothers Of Menace MC Series by Jenika Snow, in fact the whole series from start to finish as it is such a good read and will allow you to get a feel for all of the characters. I really do rate this read I loved it. Happy Reading!

I loved the story between Lila and Wrath. Hot and sexy and not near the drama as other books of Jenika&#039;s have had. They&#039;ve known each other for a long time but Wrath knew he couldn&#039;t be what Lila needed. She left, married a real bad guy and ended up coming to her brother for help. Wrath will protect Lila and her baby girl but he tells himself she can&#039;t be in his life because of what he does. I really like Lila because she went after Wrath when he was trying to push her away, but for some reason, I didn&#039;t connect with him as well as I have characters in past books. I can&#039;t really explain it because the story is good. Maybe on down the road, I&quot;ll feel better about him, but this is still an awesome book that you need if you love Jenika&#039;s writing.

Ok let me start by saying this is connected to The Brothers of Menace M.C. specifically it comes after Tanks Property book 8. Now I never read that book so I know I clearly missed parts of this story. JS does a great job of giving us the backstory of Wrath and Lila so I didn&#039;t feel like I didn&#039;t know what was going on. Now onto the story I loved it. Wrath isn&#039;t a good guy and he can&#039;t deny himself Lila but he feels he must. Lila has always loved Wrath but she needs to convince him that he is what is best for her and her daughter. Great read and I must go back and read the whole series.