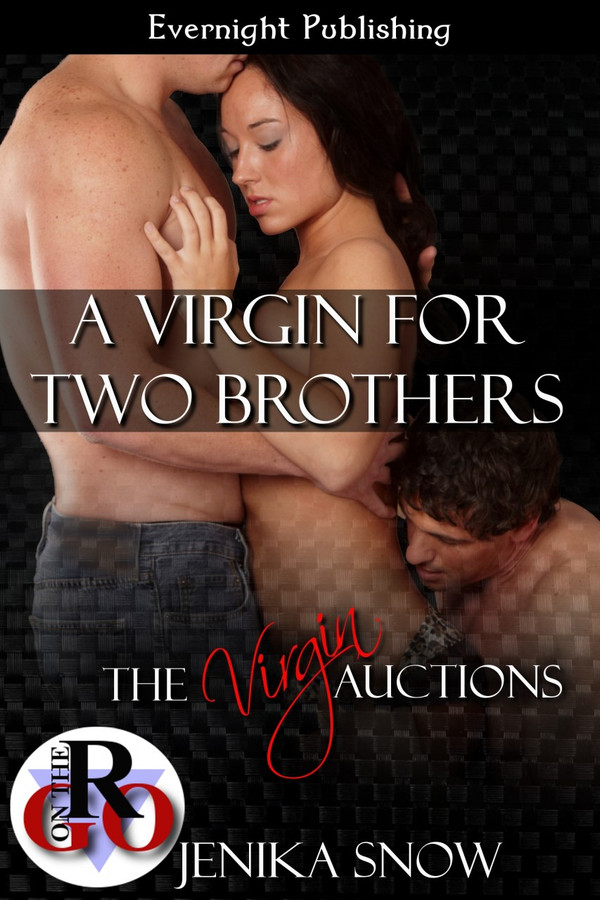 No one willingly offered themselves up to be in the Virgin Auctions, no one except McKenna Grey. With her mother ill and her father's business destitute, it's up to her to become one of the virgins placed on the bidding block. If she has any hope of earning enough money to save her family, she must make sure she's appealing to bidders.

She is whisked away without ever setting eyes on the man who won her. Not knowing if her new husband will be gentle or cruel, McKenna can only think about being strong in order to bring her family out of desolation. But the truth of who really bought her has her rethinking everything because it isn't just one man who bought her but two, and they are the only men she has ever lusted after.

McKenna closed her eyes at the feel of Christopher’s soft, firm lips gliding across her shoulder. He had slipped the material slightly down, just enough to expose that swatch of white skin. His mouth moved from her collarbone to her shoulder, his tongue peeking out gently as he made the journey.

“I want this, too.” A collective groan spilled from them and she reveled in it. It was a heady feeling knowing she caused this reaction in them.

All the while Victor stood still behind her. He didn’t speak, just watched his brother touch her. She wondered if they did this often, took women to bed and seduced them. Then again, she wasn’t just a woman now, she was their wife, and according to them that was exactly what they wanted her to be. Could she give herself to both of them? She certainly had thought about it, many, many times, but what would her family say, or think?

As if Victor heard her thought he said, “Stop thinking and just feel, baby.” The endearment sent a stab of lust through her and she snapped her eyes open to look at him. His heated stare coupled with Christopher’s mouth on her caused the air to leave her lungs. She felt Victor’s fingers curl around the edge of her lapel and when he started slowly dragging it down, exposing her breasts, Christopher’s mouth disappeared from her body. The other side of her robe followed suit until the only thing holding up the material was the sash around her waist.

“Look at how gorgeous you are.” Victor kissed the spot right below her ear at the same time he brought his arms around her and cupped her breasts. “Look at how supple you are, how tight and red your nipples are.” He dragged his thumbs across the turgid flesh, making them grow harder. Blood pumped through her body and rushed to the erogenous zone. They flushed right before her eyes and she couldn’t help but feel heat steal across her cheeks. Aside from the auction, she had never been so blatantly on display in front of a man before. It was exhilarating and frightening, especially when those men were Christopher and Victor.

“Christopher is going to wrap his lips around one of these pretty nipples, and suck them into his mouth. You are going to ask him for it, and beg him to do it harder.” The air left her in a whoosh and she looked between the two of them. Christopher stared at her breasts as his twin continued fondling, while Victor’s stoic expression remained trained on her face.

“Look at me, McKenna.” She turned and stared up into Victor’s face. His rugged masculinity stopped her heart. “I want you to ask Christopher for his mouth on you, to beg him for it.” He was taking her out of her comfort zone, making her realize what the three of them were about to do was very real.

Never taking her eyes from Victor she whispered, “Christopher, please, put your mouth on me.” She could hear a muffled noise, as if Christopher was trying not to show her how affected he was. The sound of clothing shifting barely pierced the haze that had settled over her. A second later she gasped as she felt the warm wetness of Christopher’s lips wrapping around her breasts. One of his hands cupped the mound while he suctioned her nipple further into the hot recess of his mouth. The feel of his tongue sliding over her flesh, causing it to become increasingly more sensitive, parted her lips and a low moan spilled from her. It felt so good, incredibly good.

A Virgin for Two Brothers

This read is hot and sweet. It might be a virgin auction, but it&#039;s romance all the way. Well done, Jenika Snow.

In the year 2135 arranged marriages for those of wealth are still around, but with a twist. Females are raised from the cradle in the art of submission to their future husband. They are taught the art of how to walk, sit and talk. They also learn how to pleasure their husband through film and books, so that they are presented to their masters intact. After their 22nd birthday they are registered for the Virgin Auction. Whether she sees her family or is ever allowed to wear clothing or any other privilege is at the discretion of her husband. Will she be allowed outside in the sun, or will she be locked in a room without clothing awaiting her husbands&#039; pleasure? Less than a hundred years ago women did not have the right to vote and just a few hundred years before that women could not own property. In fact women were the property of the men of their homes to barter and trade with. That is what makes this series so frightening. It is not set in the 15th or sixteenth century but rather in just a few hundred years from now. The apathy we see in people when it comes to politics makes the scenario plausible. The bridal auction is made to sound like a joyous time in a girl’s life and that she will be cherished and protected by this stranger who has bought her. That she will be helping her family with the money she will be raising for them. Slavery by any name is still slavery. The awareness this series raises is important because in some countries it is happening here. Why someone would have this for a sexual fantasy is beyond me. Now having said that let me tell you the love story written into this book is beautiful. You have a girl who loves her family enough to auction herself off to save them from being on the streets destitute and hungry. And a father who must accept that his pride has brought her to this decision and finds a way to save her. McKenna Gray has given up on finding a way to get the attention of her dream love, when suddenly she finds that she can find love in some of the strangest of places and at the worst of times. This is a novella that has you mourning a young girl&#039;s innocence and virtue. You hope she will be bought by someone kind and maybe find happiness. You will celebrate with her when she finds her happiness within the confines of her new home. This is story that has many complex levels. A society that has devalued the female in society, the idea of what we are willing to sacrifice in the name of family honor and when do we stand up for our individual dreams and tell society as a whole to take a hike. I will warn you the sex scenes are very steamy and the language a little rough. But you also have love and the honest desires shine through.

McKenna is a loyal member of her family and when her family needs her, she steps up. In this case (against her father’s wishes) she puts herself up on the virgin auction block. She will be sold to a husband who will do who knows what with her, but she will have made sure her family was taken care of. It is with some fear that she puts herself out there and in a stroke of good luck she finds she has been purchased by the Sterling brothers, friends of her family who she has long had crushes on. Both of them. There were a couple of inconsistencies that dragged me out a little bit. In the beginning it is said that McKenna was different from the other virgins at the auction because she hadn’t been trained and prepped for what to expect. Since her decision to participate in the auction was motivated by her family’s need for money, she hadn’t the same background as the ones raised to do this. Yet later it is stated that “the virgins were trained in the art of oral stimulation”. That aside, McKenna with the brothers is hot and sexy. The two brothers are completely different in temperament and that leaves a nice balance for her, both in and out of bed. Sexy short story!