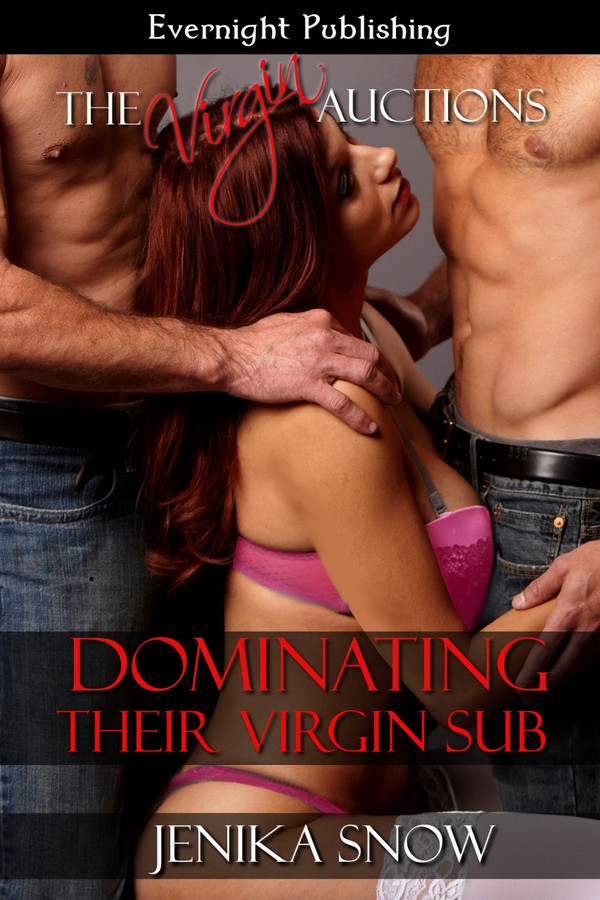 A virgin auctioned off to the highest bidder...

Maylene Steefanos has been specifically conditioned not only as a virgin bride, but a submissive as well. When not one, but two Dominants claim her as their wife, all of her training will be put to the test.

The brothers will show their virgin sub what it means to submit to them...

Nikolas and Griffin St. Michaels share everything, women included. Both Doms, they enjoy the company of a submissive together, but Griffin wants more than the one-night stand encounters they have indulged in. Nikolas, a Dom that enjoys the sound of his cane across his sub's flesh, agrees to take on a wife. He knows he must keep his sadistic tendencies reined in until he sees their bride's reaction. But both brothers realize Maylene is the perfect sub, and they will show her that with pain comes ultimate pleasure.

The door shut behind them and the obliqueness swallowed them whole. A moment later light illuminated the room and her eyes widened as she took in the scene. A large four-poster bed sat in the center of the room. A wall across from that held whips, floggers, canes, and restraints of all shapes and sizes. A St. Andrew’s Cross was on the opposite wall, the wood deep and dark and speaking of untold pleasure and pain. He let go of her hand and walked over to the wall that held his implements of ecstasy and agony. Maylene didn’t dare move, and she shouldn’t be watching him, but being in this room, in their space where power was exchanged, was a heady experience. He ran his fingers over the leather and wood that lined the grated wall. He stopped and his hand hovered over a cane. It was a dark colored wood with beautiful engraving around the handle.

He didn’t turn around when he said, “I want you on your hands and knees, little sub.” She got in the requested position and waited for further instruction. He turned around, the cane in his grasp, and his expression stoic as he regarded her silently. Seconds passed, maybe minutes before he finally spoke again. “If things get to be too much, too intense, I want you to say red. That is your safeword. Do you understand, pet?”

Maylene licked her lips and nodded, but when his jaw tightened she quickly added, “Yes, Sir. I understand.”

“Good.” He stared at her for several more moments and finally spoke again. “The cane has been considered an extreme toy in the dungeon, but I personally feel they get a bad reputation.” He eyed the implement almost lovingly then lifted his gaze to her. “This particular one is a new addition to our collection. Bamboo and Rattan have been used in discipline for a very long time.” He took a step closer and ran his hand over the smooth finish. “The sound of the cane hitting the flesh is one of the most beautiful melodies.” His deep blue eyes continued to bore holes into her. After another moment he finally said, “Crawl to the cross, little sub.”

The ground was unyielding beneath her hands and knees, but her need to please Nikolas, her Master, far surpassed any discomfort. She could feel his eyes on her, knew her privates were on full display for his visual pleasure. The way her breasts swung from her movement lent to the increased wetness between her thighs. When the cross was in front of her she stopped but kept her position on her hands and knees. The air shifted behind her as he moved closer. For several long moments he didn’t speak or touch her, but none of that mattered because his presence was like experienced fingers stroking across every erogenous zone on her body.

“Stand, pet.” Once on her feet he positioned her on the cross. With her back to him she knew what was to come.

“You remember our conversation the last time we spoke?” He was quick yet precise as he secured her arms above her head then moved down to spread her legs and restrain her ankles.

Dominating Their Virgin Sub is the fourth book in The Virgin Auctions by Jenika Snow. While this book is part of a series it can be read and enjoyed as a standalone novel. I chose this book because I enjoy reading Ms. Snow’s books. The other reason is I have read some of the other books in the series I have enjoyed them all. Maylene Steefanos was raised from a mere baby to be a submissive. She is auctioned off as a virgin. Maylene is put to the test when she ends up the submissive to two Doms. Griffin and Nikolas a twin siblings who have the same taste in woman. However, Griffin wants a wife and Nikolas wants a sub he can dominate. The chemistry between Griffin, Nikolas, and Maylene is blistering. They make a great trio together. I loved that both Griffin and Nikolas were able to find one person that fulfilled there needs beyond their expectations. The sex scenes were scorching hot. I found this book well written. The main and secondary characters were stimulating and lifelike. This book does a great job of sucking you into the story and not letting go until you have finished the book. Overall, this was an enjoyable story. I can’t wait to read the next book in the story.

Dominating Their Virgin Sub is set in a future where the elite male can purchase a bride at the Virgin Bride Auction and be guaranteed to receive an innocent and intact female that has been trained to be the perfect woman. The perfect woman is demure and submissive to any and all of her husband&#039;s desires. Once he has won the bidding on the bride of his choice she becomes his property and is placed at his mercy. Nikolas and Griffin St. Michaels (introduced in The Highest Bidder) return in Dominating Their Virgin Sub in search of a Virgin Bride of their own. They don’t just want any bride, but one especially trained in the D/s lifestyle. They are used to sharing their sexual partners and Maylene Staffanos is afraid of not pleasing her new master. How is she supposed to please two? This is Jenika Snow&#039;s 4th offering in The Virgin Bride Auction Series and with only fifty-six pages I was surprised how many of those pages were devoted to developing the story. I thought this made the love scenes more poignant and enjoyable. Ms. Snow&#039;s character Nicolas pulled me the most as he struggles with developing a relationship with Maylene outside of his D/s one. I do wish she would explain more why he felt that love was never to be a part of his life, but Ms. Snow does show how he comes to realize his aloofness is destroying his chances with Marlene and how he goes about rectifying it. Each of The Virgin Bride Auctions is a standalone book but we are treated with finding out how the characters from Book 3, The Highest Bidder are faring in this book. You may want to read how Kristoff and Veronica started and what brought them to where the relationship is now before getting started on book 4 about Kristoff’s brothers. I do have one question for Ms. Snow. As these characters have children of their own are they planning to send their daughters to the Bridal training and then on to the Auction Block? If not how can they justify participating in one of the auctions? This is for both sides because some of the brides chose to participate as well and the men who bought them. As you read all the novellas in this series you may be surprised why each side partook in the auction. Do not judge until you have read their stories!

The Suit and His Switch Claim Their Sub by Jenika Snow