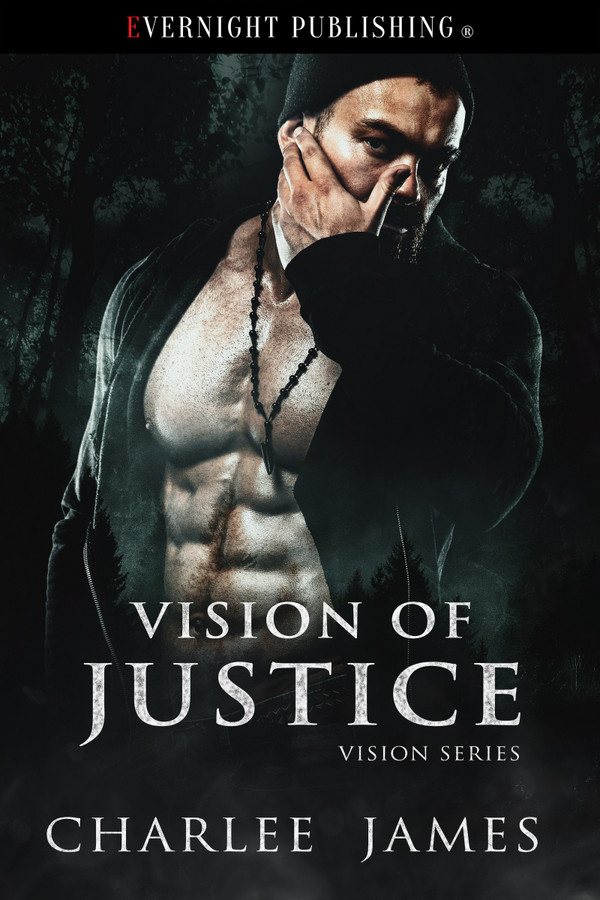 After artist Sasha Frost rescues the victim of an abduction, it places a target firmly on her back and Detective Gus Lambert in her life. The connection between Sasha and Gus is unexpected—and intense. When a string of murders is linked to a tragedy from Sasha’s past, it becomes obvious more than their hearts are at stake.

She shot to her feet, chair scraping against the wood planks. “I heard the doorbell.” Everything inside her sagged with relief as she crossed the deck, pulled open the slider, then stepped into the cool, quiet house. Whoever had rung the bell saved her from a situation that she wanted to pretend never happened. She was still trying to wrap her head around the exchange when she opened the door to Gus standing on the porch. Her train of thought crashed, then ignited into flames. He filled up the frame with hard muscle and towering height. Dark jeans hugged his thighs, a black t-shirt stretched over his broad chest, and the look in his eyes … good Lord. She fumbled around, finding stability against the rock-solid frame, holding on to it in case her wobbling knees got the best of her. He stared at her as the seconds ticked by, those electric currents snapping along her skin, the heat in his eyes searing her from the inside out.

“Sash?” Ted’s voice, rigid with annoyance, echoed through the foyer. Still, she couldn’t seem to look away from the smoldering hazel eyes that were sealed on her. “There you are.” Footsteps sounded behind her. “Who are you?”

Sasha cleared her throat, somehow found her voice. “This is Detective Lambert. Detective, this is my friend Theodore.” Ugh. Her vocal cords were in a husky tangle that she couldn’t even recognize. No one had ever tossed up her emotions or these primitive needs inside her like Gus did.

“Is there something you need to discuss with Sasha?” The soft, even hopeful voice he’d used mere minutes ago vanished, replaced by hard skepticism.

“Actually, Ted, there is. Detective, if you’ll just come inside and sit in the living room, I’ll be right with you.”

“Anything he can say to you, he can say to me, too. We’re practically family, Sash.” Ted crossed his arms across his chest, jaw clenched.

“No, the matters I need to discuss involve the case directly. If I’m intruding—” Gus’s voice was cold and distant. A tone he’d never used around her before.

No. Her stomach twisted. If Gus left, Ted would say what had been on the tip of his tongue out on the patio, and when he did, everything would change. She needed their relationship to stay the same. Ted had been there for her during her darkest times. How could she tell him she didn’t have any feelings for him beyond friendship? How long had he been craving something more?

She turned to Ted and swallowed the lump that instantly balled in her throat at his wounded expression. “Can I talk to you in the kitchen?”

He sighed and dropped his hands to his sides. After a withering glance at Gus, Ted turned the corner into the kitchen.

“I’m sorry to cut our night short. I just need this to be behind me.” She was an awful person for using the abduction case to get out of an uncomfortable social situation. She’d be going straight to hell. Part of her was angry with Ted for bringing this up right now. For changing another thing in her life even if it couldn’t be helped. No, that was wrong, too. He’d only ever been there for her. Hell, she was a sponge sopping up guilt these days.

He combed his fingers through his hair again. “Be careful. He looks … dangerous.”

Oh, you have no idea. “I think homicide detectives are supposed to look that way.” How difficult must it be to surround yourself with death, day in and day out. She couldn’t imagine the emotional toll it cost to repeatedly witness the worst of humanity, to inform families that their loved ones had been murdered. She glanced toward the empty foyer. Gus must have done as she asked and gone into the living room. The thought of him in her space fired up all her nerve endings. “I’ll make it up to you. Dinner’s on me next time.” She tried to keep her voice friendly, platonic. If you went Dutch, you stayed in the friend zone, right?

A frown tugged at the corners of his lips. “There are things we need to talk about.”

“Okay,” she choked out and walked him to the door. “Thanks for coming.”

“Goodnight, Sash.” His arms came around her, held her a moment more than was appropriate for friends. Then his lips pressed against her cheek, something he’d never done before. Maybe he was just glad she wasn’t harmed. Maybe he thought that he’d developed feelings for her, but they were really born from fear of losing her.

She closed the door and locked it when Ted pulled away in his BMW. Releasing a long pent-up breath, she crossed into the living room. Gus stood the moment she entered. She paused as he prowled across the room toward her. She was frozen in place, prey that desperately wanted to be hunted.

“Why did you lie to him?” he ground out, stopping a foot in front of her. “I never said I was here to talk about the case.”

“It’s … complicated.” Her heart was thudding, pulse roaring. Gus stood stock still, and she realized he was planning to stay that way until she explained. “We’ve always been friends. Just friends. He hinted at wanting more, and I panicked. You were my saving grace. I’m sorry I used you like that.”

“Do you return those feelings?” His voice had gone somewhere dark. The only movement he made was the tic in his jaw. She should be frightened, but instead, a shiver raced down her spine, breathed life into dormant, needy places inside her.

“No.” Oh, it would be so much less complicated if she could love Ted. Gus had complication and heartbreak stamped all over him, and for the first time since the fire, she craved that more than her next breath. She kept her eyes glued to his as she took a step closer, welcoming him to close the gap.

“Thank fuck.” One swift movement, and Gus’s arms were around her waist, pulling her against him.

This is a edge of your seat murder mystery with a steamy romance thrown in. I really enjoyed this book. Someone is targeting Sasha and detective Gus must find them before she becomes the next victim.

An intriguing story with an intense level storyline. Lots of misdirection and suspects will keep you guessing to the conclusion but the romantic storyline between Gus and Sasha shines throughout. Great character building with sufficient backstory to enable you to engage with the main characters, this book was an enjoyable read. Hoping for Julie/Isaac and Kinley/Easton stories to come

This is not the first time I’ve read something written by this author, but it’s so different than the last book I reviewed. Both books were fantastic, but this one left me with such an adrenaline rush that I could not put it down. It had passion, action, murder, kidnapping, and a whodunit type mystery in which when you find out who is doing it will shock you. There is also a “what the heck” admission that will make you second guess people’s motives.

Very intriguing story. The book started with immediate action and mystery and ended much the same. There was never a dull moment in this book. You were guessing the bad guy and the full extent of what happened until the very last chapter! Sweet with an insta love but denial romance.

Vision of Power by Charlee James