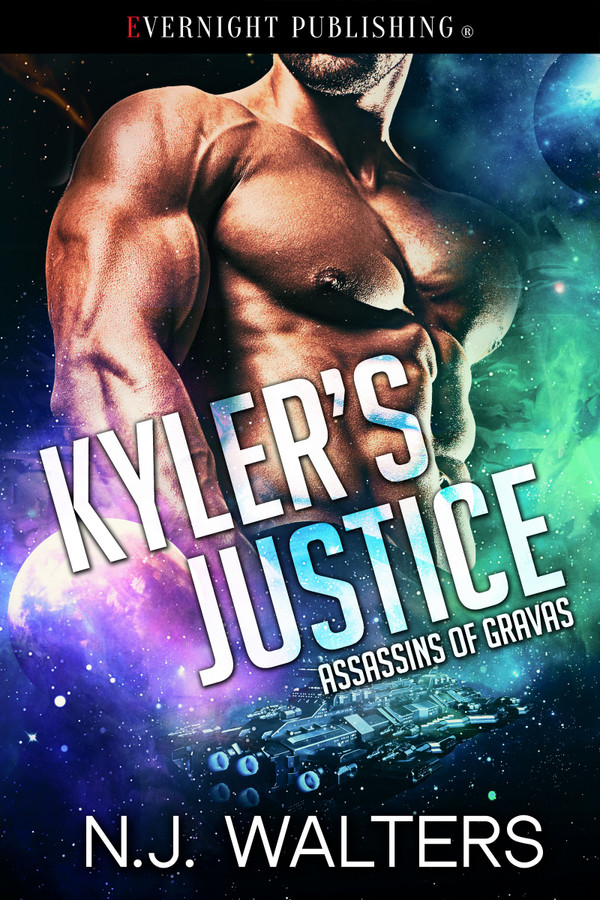 Kyler el Darkos is an elite Gravasian assassin who answers only to the king of Gravas. His mission: Find Balthazar and eliminate him and any of his associates for their part in abducting the king’s son and trying to market stolen Gravasian weapons. His search has brought him to the planet of Mortis and Hell’s Gate, a bar owned by Balthazar’s father. The last thing he expects is to fall for Etta Mortis—his target’s sister—a woman who tempts him to risk his honor for a chance at love.

A bead of sweat rolled down her back, but she kept her expression neutral, bordering on friendly. The situation with Wallace and the others was nothing new, but it was always a balancing act to keep it from exploding into something serious.

She’d forgotten how much she’d hated handling these kinds of conflicts.

Most of the time, she hid in the kitchen, keeping the food coming. And since sales were up since she’d been back, Helldrick hadn’t complained.

But tonight, he’d left her to close the bar. An unusual occurrence. Call her paranoid, but the fact there was a stranger watching her seemed like too much of a coincidence. Sure, they got newcomers from time-to-time, but they almost always came with a friend or ally. At least the first time.

She’d been away a long time, so she’d checked with the waitress, who’d confirmed her suspicions. This guy was new. He was also huge. Even sitting down, he seemed to dominate the space. He radiated a fuck-off vibe that was unmistakable.

Better to take the bull by the horns and find out what she could about the man. Maybe she was mistaken. Maybe he’d simply been curious about the drama.

The itch in the back of her neck said otherwise.

The stranger hadn’t moved. Not to fidget or shift his weight. A cold shiver skated down her spine, in spite of the stagnant heat in the room. Danger! her mind screamed.

She licked her dry lips and set his drink on the table. “Forget I asked.”

“Sit.” His voice was deep, completely without an accent of any kind. When she hovered there, he extended one of his legs and pushed the chair out.

Too late to rethink this. If she turned tail and ran, the others would notice. Because they were all sure as hell watching.

Cursing her impulsive action, she took the seat and placed her ale on the table. “You’re new here.” Oh, brilliant opening. He made her nervous, something she hadn’t expected.

She’d been running around Hell’s Gate since she was a child. Had grown up around the worst criminals in the galaxies. Not that there hadn’t been some good ones, but even they’d had a code they lived by that sometimes differed from that of the Alliance law enforcement patrols.

She waited several heartbeats, but that was it. The corners of her lips twitched, a combination of humor and unease. “Not much of a talker, are you?”

Laughing outright, she took a sip of ale. She’d poured the good stuff for them, not the rotgut her father served most of his customers.

This newcomer intrigued her. His features were hidden in the depths of the cloak he wore to cover his head. Again, not unusual. There were plenty here on the run from the law and just as many who’d turn them in for a bounty.

Honor among thieves was little more than a fairy tale.

“What’s your name?” The challenge was on to get him to say more than one word at a time.

Short and to the point. “You going to be around these parts long?”

The tables around them had lost interest and gone back to their own conversations. Not that there wasn’t someone listening. Someone was always listening. Word of this incident would reach her father as soon as he turned up tomorrow. Maybe even tonight, if one of his cronies hunted him down.

She fisted her hand in her lap, anger suddenly pouring over her. “I shouldn’t be here.” Etta hadn’t meant to say that out loud, but it was still the truth. And she didn’t just mean at this table talking to this man. Five long months had passed since Balthazar had shown up and destroyed her old life and her peace of mind.

She had indeed sold her soul to the devil.

Helldrick wouldn’t let her take her sisters and leave. He didn’t want them. Couldn’t care less about them. Their only use was as leverage over her. Not that he wanted her any more than he did her sisters. All he wanted was control.

No one left unless he allowed it.

The only one of them he showed any fatherly interest in was Balthazar, and that was likely because he was the only one who looked and acted like him.

Shocked that he’d not only spoken more than one word but had also asked her a question, she was momentarily at a loss for words. Ky’s face might be hidden, but she sensed the intensity of his stare. This was a man who missed nothing.

Third in the series and it is getting better and better. Tall, cold, and sexy Gravas assassin who meets his match in a strong, fiery, determined woman who will do anything to protect her younger sisters. Cannot wait to see who is next!

The way this author balances intricate description, deep emotion, scorching chemistry, and memorable characters never fails to pull me in from the first page. Fantastic series.