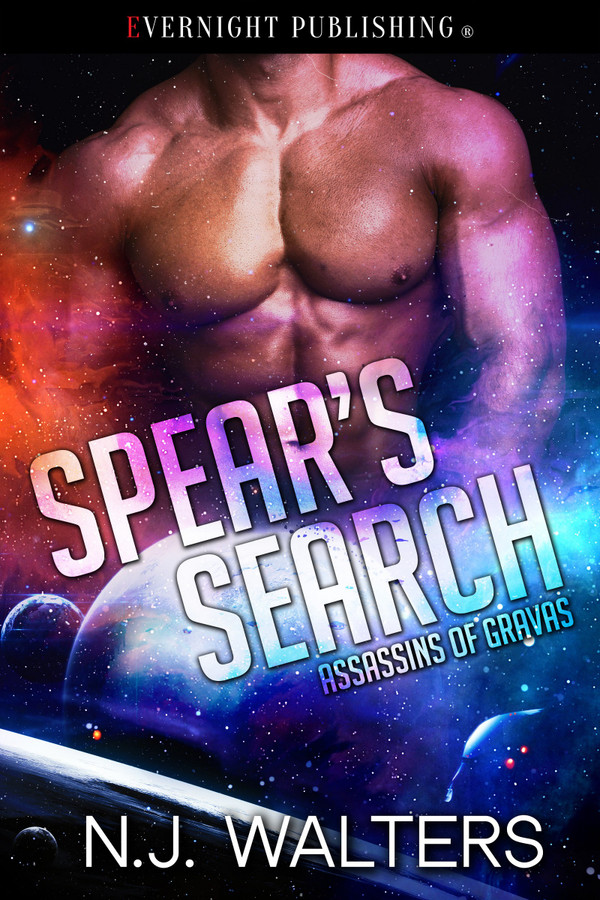 Spear el Gravaso—prince of Gravas and assassin—is on a mission to find his brother. His hunt had led him to an auction of Gravasian weapons that can only belong to the missing man. He needs to secure the items, get any information he can, and kill all those involved. Nothing and no one will stop him.

Sass was taken from a harsh life on the streets as a child and trained to be an assassin by the powerful Artemis. The lives of those she loves is on the line if she fails her mission—to win the auction of Gravasian tech. Only one problem—Spear is in her way.

Their battle escalates, as does the explosive heat between them. When it comes down to it, they can fight each other and one of them will die or they can join forces. But can they trust each other?

He would not fail in his mission. He never had and wasn’t about to start.

The stakes are too high.

But a mistake now could cost him later. Taking the time to investigate wouldn’t change the inevitable outcome, only delay it.

When a group of workers strolled by, he timed it perfectly and slid into their midst. He casually scanned the area without seeming to. Only years of practice kept his heart rate level and his breathing even. He hunched slightly, as though leaning down to hear what one of the men was saying.

At six-six, it wasn’t easy to go unnoticed.

The group he’d joined continued to the other side of the large platform, giving him time to survey every inch of docking station number four.

Some might call him paranoid, but his instincts had kept him alive in situations where he should have died. He never doubted them.

There. Off to the right in the deepest shadows. The slightest of movements. If he hadn’t been looking straight at it, he would have missed it. The light was out in that corner.

Accident or on purpose?

He’d bet the last credit in his pocket it was the latter.

Keeping his head down, he continued with the group, breaking off when he was past the viewer. Ducking behind a recycler, he counted to ten before making his way behind several large pipes that ran parallel to the floor. The wonderful thing about a docking station was the myriad places to hide. It was a beehive of activity and a labyrinth of pipes and cubbies and equipment.

Every step was silent, even on the metal flooring. Not that anyone would hear it above the ruckus of people and machinery. But it was a mistake to underestimate the watcher. Some species were gifted with abilities above the norm.

The corners of his lips turned up slightly, in spite of the gravity of the situation. He did love a challenge.

His vision quickly adapted. He inhaled slowly, drawing in any scents, but picked up nothing beyond the usual stench coming from the ships and people working on the platform. There were too many to isolate any specific one.

Going slower than even a Darkatan silkworm, he eventually positioned himself behind a steel girder and listened. Five minutes passed before he caught the slightest ruffle of clothes.

The watcher was patient. Hadn’t left the hiding spot. Maybe he wasn’t the target at all, but his interest was aroused. And it was always better to be certain than sorry.

He carefully withdrew the razor-sharp dagger from the hidden sheath strapped to his arm. Made of the finest titansteel—a virtually indestructible metal only found on Gravas—it was easily concealed from security scans, lightweight, and could be used to kill with minimal effort.

Unlike a blaster, it was silent.

In a soundless rush, he was around the girder, thick forearm wrapped around his victim’s neck and the sharp tip of the blade at the base of the skull.

He was dealing with a pro. Only another assassin would react in such a way.

“Want to tell me why you’re following me?” It was second nature to change the pitch and tone of his voice and speak in Alliance Standard, the language most commonly spoken on all Alliance planets and stations.

The voice was low with a slight lilt that skated over his skin like a caress.

What in the depths of Gravas was going on? Why was he reacting in such a manner?

With lightning speed, he assessed his quarry. About six feet, slender, short dark hair. Not enough light to determine true color. The lightest fragrance of mint teased his nostrils and made his entire body clench.

The tiniest shrug caused the blade to scrap across the tender skin on the back of her neck. And it was a woman. The certainty settled in his bones.

Not that it meant anything. Some of the deadliest assassins in the world were women. Too many people underestimated them.

He wasn’t most people.

“I wouldn’t move if I were you,” he cautioned. One thrust and she’d be dead before she could take a breath.

She cursed under her breath. “Fuck.”

His informant was likely slipping through his grasp, but for the first time in years, Spear el Gravaso, prince of Gravas and elite assassin, was actually more interested in something other than his mission—or rather, someone.

“I won’t ask again.” Curious or not, he couldn’t waste any more time. He flexed his forearm the slightest bit, not enough to choke her but enough so she knew he meant business.

If you were a fan of author N.J. Walter&#039;s Marks Mercenaries then you might remember the Gravas world. Vaden who found Abby. Aliens, secretive, all male, over 6 and 1/2 feet tall. Yes, those guys! Spear&#039;s Search is Vaden&#039;s brother, Spear&#039;s story. An assassin in search of some weapons up for auction and the missing brother that belongs to those items. Sass is a woman who is strong, resilient and an assassin who is after those items up for auction. To her it is a job, but also the safety of two people she calls family are on the line. Spear and Sass must find a way to work together to get the weapons and save her family. There is a lot of world building in this book as it is the first, but it is done smoothly and in a way that is quite enjoyable. You learn more about Gravas, you learn more about Spear and Sass and the hard world she came from. Mostly you learn about the big heart of the big guy, the softness that is Sass - behind the tough act and you also learn that nobody messes with the royal family - not around the King of Gravas. Well written, fun read, that will give you an emotional high along with the sweet and steamy, the action, danger and intrigue that is an N.J. Walters book! A must read!

I love this new series of assassins. Two assassins after the same thing but for different reasons, and fall in love.

I could actually SEE the lead characters in my head and loved both of them. I don&#039;t usually like the female (it&#039;s just jealousy that she gets my BOOK BOYFRIEND! ha) but I loved Sass or Sassy as she was called. Tall woman with deadly skills and a big heart. He was perfect for her. I never use SPOILERS so you just have to trust me.... READ THE BOOK ! p.s. love the connection to the Marks Mercenaries series... hint... Abby!