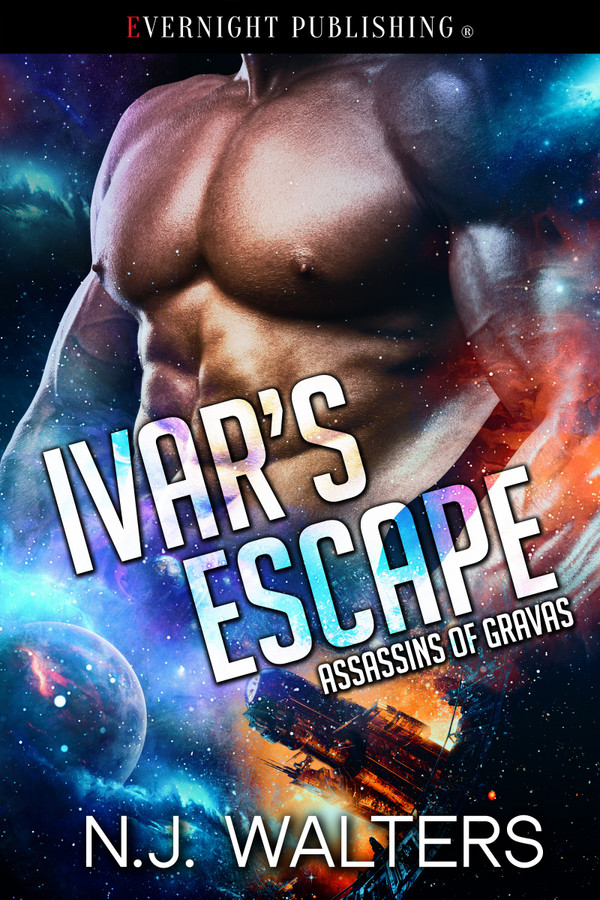 Ivar el Gravaso—a prince of Gravas—wakes in a prison cell with no idea how he got there or even who he is. If his captor can’t get answers from Ivar, his days are numbered. When a strange woman sneaks into the prison and promises to get him out, he’s suspicious. Is this nothing more than another trick by his captor or is she truly there to help?

Delphi is an assassin sent by the Gravasian government to infiltrate the space pirate stronghold of Tortuga in search of the missing prince. She finds a prisoner who is well-spoken, knowledgeable, and ready to fight, even though he has no idea who he is. He might be her target. It’s difficult to tell due to his ragged appearance. But no way can she leave him behind, no matter who he is.

That certainty filled him. He grabbed the candle, which was beginning to sputter, and sat it upright beside him. On his knees, he gripped the metal bars. “You have to leave. You can’t be caught here.” What they’d do to a woman didn’t bear thinking about.

She jerked back as though he’d hit her. “You’re worried… About me?”

“Women aren’t treated well around here.” The nourishment bar was lying on the stone by his knee. He grabbed it, bit off a chunk, and began to chew. The slightly nutty taste was pleasant and so different from everything he’d eaten in far too long.

“You really don’t remember your name?” Del totally ignored his revelation about her identity.

He shook his head. “I’ve been hit so many times it scrambled my brain.” He prayed that was all it was. That it wasn’t permanent. This wasn’t anything he hadn’t told his captors so he wasn’t worried about telling her.

“Shit. None of us considered this.”

He ate methodically, chewing each bite over and over until it practically dissolved in his mouth. Only then did he swallow.

“Do you have any tattoos or markings?”

Since he’d already checked and his captors had examined him, he shook his head. “No. You’re looking for someone?” Despair settled over him. “You don’t know me, do you?”

The shake of her head was hesitant, as though she didn’t want to disappoint him.

His head dropped forward and he nodded. “Thank you for the nourishment bar. You should go.”

“What do you remember?”

“What does it matter?” He slid closer to the bar, anger threatening to take control again. His emotions were all over the map, his usual restraint almost nonexistent. It was the flare of hope followed by the crushing disappointment. Better Del had never come.

Prickles crept down his arms. The short hairs on his neck rose. “Why? Do you think a simple candle and food will break me when all the beatings and starvation haven’t?” It was actually a brilliant tactic. He was so hungry for kindness, for hope, he’d almost given in.

Her hands were fisted by her sides. Frustration or anger? It was difficult to tell.

“How long have you been here?”

“Shouldn’t you know?” His voice was a hoarse whisper. It had been so long since he’d actually talked with someone. Usually, he was silent. Or screaming from the torture.

“Just tell me.” She glanced toward the door at the far end of the hall.

He knew how many marks he’d scratched into the wall. “I’m not sure. I can’t tell time from the sun. But I think it’s been about forty-eight planetary days.” An eternity.

She started to rub her hand over her face, cursed, and stopped. “Is there anything you remember?”

He snorted. “I speak multiple languages and can map the known universe.” A vision popped into his head. It was a formal dinner of some kind. “And apparently I know the right silverware to use at a banquet. Not exactly helpful.” He clamped his mouth shut before anything else spilled out.

“You’d be surprised.” Her voice was soft.

His heart began to race. “Am I who you’re looking for?” When she hesitated, he almost begged her to answer. He bit his lip hard, drawing blood, to stop himself.

“I think so. Who is keeping you here?”

His captors already knew that so there was no reason for her to ask. “A man named Balthazar.”

Something about her changed. A spike of excitement shimmered in the air. “Does the name Spear mean anything to you?”

“Is that who I am?” He rolled it around in his head. “It doesn’t seem right.” But it did seem familiar.

Your body is a weapon. So is your brain. Use it. The voice in his head rang with authority. He tried, but there was nothing but a blank slate where his memories should be.

He bit back his roar of denial. She’d jolted his world, given him hope. To take it away would crush him.

You’re stronger than that.

“I have to take the candle.”

She was right. If the guards discovered it, he’d get a beating until he confessed who’d given it to him. He didn’t want Del getting in trouble with Balthazar. He shoved the candle through the bars. The flame sputtered and extinguished. There was a slight rustling sound as she collected it and slipped it into a pocket.

“I’m going to get you out of here.” Her words sent warmth to his heart.

“It’s too dangerous.” It was a miracle she hadn’t been found out.

He shook his head, not sure if she could see him. “The guards don’t have blasters, but they have knives and clubs and they’re big bastards.”

“And I’m deadlier than I look.” The air in front of him stirred as her dark hand came toward him. He flinched before he could stop himself. When she started to withdraw, he grabbed her fingers. She curled them into his, squeezing gently. “I’m going to get you out of here.”

The promise sank into his bones, strengthening them, firing his determination. “You can’t risk yourself. I don’t have much time left. Balthazar wants information I can’t give him. Even if I could remember it, I wouldn’t.”

“Not even to save yourself?”

He shook his head. “No, honor is everything.” He’d said it without thinking. It was part of the very fabric of his being. “Family and honor is all.”

Her fingers tightened around his. “It’s a pleasure to meet you, Ivar.”