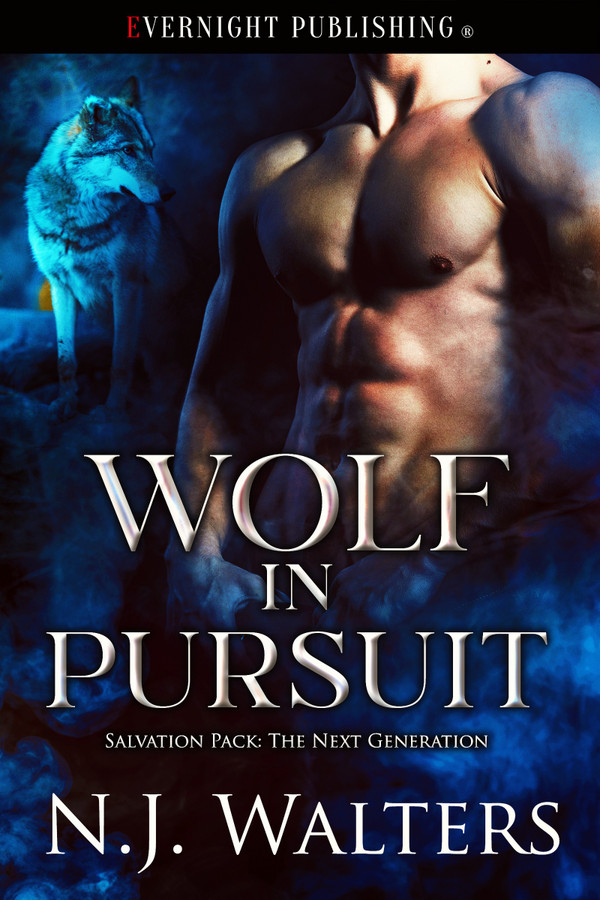 Salvation Pack: The Next Generation, 2

Etienne Rollins is in hot pursuit of Amy Blanchard, the female he wants to mate. Her sheltered upbringing has left her questioning her future and place in the pack. The sizzling attraction between them, the change in their relationship from friend to romantic interest, confused her even more, so she fled. He’s tracked her to a bar in Tennessee and not a moment too soon, as she’s caught the attention of two unattached, unknown male wolves—the Landry brothers.

Amy uses Etienne’s unexpected arrival to explore the sensual heat pulsing between them. Not easy to do while handling the Landry brothers, a violent confrontation with some humans, a kidnapping, and fleeing a crazed wolf who wants to use her to get back at the Landrys. If she survives, she’ll need to confront her feelings for Etienne once and for all.

The bar was like dozens he’d been in before. The smells never changed—alcohol, food, sweat, and perfume. He’d always hated it. But this place had something the others hadn’t. A fragrant scent lingered, a mixture of the outdoors and a sweetness that made his mouth water. It stood out over the others, like a rose in the center of a swamp.

Feeling eyes on him, he turned unerringly to the dark corner on his left. And there she was, safe and unharmed. The frantic restlessness and fear that had dogged him for so long dissolved, and he took what felt like his first real breath in weeks.

Standing in the shadows, Amy stood out like a beacon of light. He drank in the sight of her, from the top of her sleek blonde hair to her sneaker-clad feet. His eyes narrowed and a growl rumbled up from his chest when his gaze landed on her wrist. She was leaning on a table, and some guy was touching her.

Before he could head that way, she stepped back. Fortunately for the guy, he released her. Etienne decided the unknown man could live.

His gaze tracked her as she hurried to the bar. She could run all she wanted. He’d be right behind her. But he would not give her a reason to bolt.

The more primal part of him wanted to grab her, toss her over his shoulder, and drag her home. But like any wild creature, she’d fight captivity. The trick would be to lure her until she trusted him enough to want to leave with him. It would be even more brilliant if he could convince her to do the asking.

That was a tall order, but he didn’t mind hard work. Amy was well worth it.

As he walked across the crowded dance floor, people instinctively moved out of his way without him having to ask. Humans had no idea what he was, but they unconsciously understood it was better to get out of his way. It proved their instincts hadn’t all been blunted. He had no problem with that. Made things easier.

Her back was to him, but her shoulders hunched as he approached. The music was too loud, the air thick and nasty, and it was far too crowded. This was not how he’d envisioned their reunion, but he’d work with what he had.

She shivered and wrapped her arms around herself. The older woman pouring drinks behind the bar stopped what she was doing and glared at him. “Get you anything?”

So, she’d managed to find a protector. He wasn’t surprised. As strong as she was, there was something about Amy that prompted people to want to look out for her. She was tall and lean, her curves subtle. He ached to touch her but didn’t dare.

“Mister?” The bartender rapped her knuckles on the bar top.

“The kind in a bottle.” He didn’t care what it was. “You going to say hello?” She took his question as a challenge, as he’d known she would. Amy wouldn’t back down from the devil himself. No, she’d charm him until he’d be willing to lay waste to the world for a single smile from her.

It was a good thing she had no idea of the power she wielded so effortlessly.

Her chin went up and she slowly turned. He swallowed heavily. She’d lost weight, was leaner, her features more pronounced. Her green eyes flashed with something. Anger? Relief? Hard to say with any certainty. Then it was gone, replaced by a bleak acceptance.

What the hell did she think he was going to do? Toss her over his shoulder and take her home? Not that he hadn’t considered doing just that, but that was before he’d seen her.

His mind calculated odds and outcomes. His mother had always complained he was too smart for his own good, always planning three steps ahead. He prayed it worked in his favor now. He didn’t see it as manipulating but as guiding people toward the best possible outcomes for everyone.

His good intentions were almost washed away by the soft sound of her voice. He closed his eyes, inhaled sharply, and tucked his hands in his pockets to keep from reaching for her.

A bottle slammed down in front of him. “Four dollars.”

He pulled out a five and tossed it down. “Thanks.” Amy was watching him like a doe watched a hungry wolf, wary and ready to bolt.

“Amy, you want me to call the cops?” the bartender asked.

Even if she wanted to, she wouldn’t. A werewolf would never involve the human authorities in their problems. It was an unwritten rule, but one that none of them ever broke. If humans found out about them, they’d all be hunted to extinction. People were nothing if not predictable.

Lying wasn’t an option. He could evade the question or choose not to answer, but he went with the truth. “It was your call to your momma. It was traced to a local tower. I’ve been searching for you since. Your daddy wanted to come.”

She closed her eyes and made a small sound of pain. He had his arms around her before he’d realized his intentions. The need to comfort her was instinctive. He buried his face in her hair and inhaled her scent. Nothing and no one had ever felt as good or as right in his arms as she did. His wolf gave a rumble of relief.

Her hand pressed against his chest, not to pull him closer but to push him away. He took a step back. “Amy.”

With a shake of her head, she turned aside. “Not now.”

He got it, he did. She was at work, surrounded by strangers. This was neither the time nor the place. “I’ll wait.”

Her smile was unbearably sad. “I figured you would.” The laugh she gave verged on tears. Someone yelled from a nearby table, and she left him standing there.

Amy felt like she didn’t fit in her own skin. Etienne has been grown up with Amy they were best friends and did everything together. Things changed and he wanted her as his mate. Amy was so confused with everything especially her feelings towards Etienne and he has finally found her. I can’t wait to see what happens when the others need to find themselves

Not gonna lie, I am such a huge fan of the Salvation Pack series, but I may just be a bigger fan of their kids. So I guess you could say that I am totally obsessed, which I am. I am just so invested in this pack family, I can’t get enough of it. Can’t read it fast enough. Can’t get a new book fast enough. I devoured this book in one day, of course it was Gator’s son, Etienne, and Cole’s daughter Amy. Amy leaves home without telling anyone, and Etienne goes after her. After he finds her, there’s a bit of trouble, ok it’s more than a bit. Etienne is just as intense as his dad, and knows he wants to mate with Amy, and Amy is definitely a daddy’s girl, complete with her fairy princess looks. Together these two were quite the force, and their chemistry was scorching, clears throat, he’s quite the dirty talker, and I loved it. I also loved that these two got a lot of attention, especially Etienne, there was a scene with some humans talking about him, and it was priceless. We get to go back to the Salvation Pack, with a fast action fantastic storyline, devoured this book. Always want more. An epilogue that will definitely have you needing more, yes I said needing, not wanting, because I really, really need the next book, and a hea. Total book crack series.