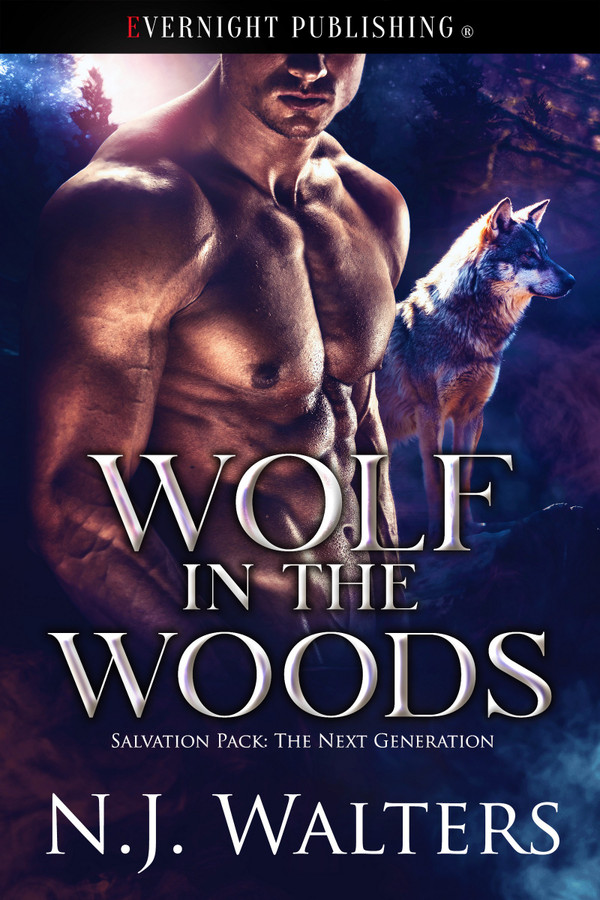 Salvation Pack: The Next Generation, 1

Not wanting to be forced to mate to an eligible male in her pack who won’t take no for an answer, Addie Fuller is on the run.

Billy Gallagher might be human, but he understands werewolf culture all too well after being raised in the Salvation Pack.

When their paths cross, he helps her, even knowing it will likely mean his death. He’s no match for a full-blooded male wolf. A short, brutal fight, leaves him near death and Addie fighting to save his life.

He recovers, but he’s not the same man he was. The one thing he does know for sure—he and Addie are meant to be together. All he has to do is convince her of that and deal with the threat looming over them.

Who is this guy? Where the heck did he come from?

There was no time to get answers. The tall stranger sauntered forward to confront Simon and Jude, as though he didn’t have a care in the world.

Even more shocking, he knew what they were.

He wasn’t the least bit taken aback by seeing two naked people and a wolf. Obviously, he’d been listening to them if he knew about the claiming. He was a stranger, but he had to be a wolf or at least a half-breed if he knew so much about their kind.

“You need to leave,” Jude repeated. “While you still can.” His voice was so low it was almost a growl. The stranger didn’t back down, but stood taller and tilted his chin up slightly in an obvious challenge.

Addie took a deep breath and caught the stranger’s scent. Shock rippled through her. He was totally human and no match against two male werewolves. As much as she appreciated him coming forward on her behalf, she couldn’t allow him to be hurt. And that’s what would happen if he stayed.

“He’s right.” She looked the stranger right in the eyes. “You should go.”

The human hooked his thumbs into the front pockets of his jeans and shook his head. “Not unless you tell me you’re ready to mate with that wolf.” He jerked his head toward Simon.

There was something about the man that made her unwilling to lie. She shook her head. “No, I can’t tell you that.”

“Then I guess I’m staying.”

Simon began to shift, his bones and body contorting and reshaping, fur disappearing and turning to skin. Back in his human form, he spat on the ground. “This is none of your business, human.” He made the last word sound like a curse and took a menacing step forward.

But the stranger didn’t back away. Nor did he seem the least bit shocked by Simon’s transformation. Human he might be, but wherever he’d come from, this was not his first encounter with her kind.

She didn’t know if this newcomer was brave or stupid.

“But since you’ve seen what we are, you have to die,” Simon added.

The man cocked his head to one side. “I knew what you were before I stepped into the clearing.” Then he turned his attention to her and inclined his head. “Billy Gallagher. Pleased to meet you.”

It was embarrassing to be totally naked in front of a complete stranger. Even with her hands strategically placed, there was no hiding her nudity. She always changed and shifted before joining the others. She wasn’t ashamed of her body, but she was modest, and there was no need to make the situation regarding her unmated state even more volatile by parading around in nothing but her bare skin.

At least she knew his name now. Billy Gallagher. It suited him. He was just a shade over six feet tall with blond hair and eyes as blue as a summer’s sky. He wasn’t heavily built, but from the way he moved, there was a lot of lean muscle under his clothing

“Addie Fuller.” It should have felt ridiculous to be acting like the situation was normal, but she honestly didn’t know what else to do.

Simon gave a menacing growl. “You don’t look at her. She’s mine.”

Enough was enough. “I’m not yours. I’ll never be yours. I thought we were friends, but right now, I don’t like you. I don’t know who you are anymore.” And that was the truth. They’d all grown up together, playing and running wild as children. Everything had changed these past few months.

She turned to Jude, appealing to his common sense. “You need to take Simon home. We can pretend this never happened.”

“She’s right.” Jude held his hand out toward his friend, but he was having none of it.

Billy’s affable demeanor disappeared in the blink of an eye. “You might want to rethink that. If I don’t turn up at home on time, people are going to come looking for me.”

“Let them come.” Simon threw back his shoulders and gave a cocky grin. “They’ll have to find your body.”

An icy chill ran through her. She’d never once thought Simon was capable of cold-blooded murder. Of course, she’d never thought he’d try to force her to mate with him either.

“Oh, they’ll find it.” Billy tapped the side of his nose. “Werewolves have an excellent sense of smell.”

Brow furrowed, she cocked her head to one side, totally confused. “Werewolves?”

“Didn’t I mention I’m part of the Salvation Pack out of North Carolina? No? Well, I am. So unless you want to bring a whole heap of trouble down on your pack, you’ll walk away.”

This is the book I have been patiently (shakes head), ok so not so patiently waiting for the Salvation Packs kids aka next generation. This is one of my favorite series and packs. I was hoping there would be more with the pack kids, and apparently I wasn’t the only one. I love that they are strong, willing to fight for family, and what they believe in. But don’t mistake great people for weakness, because this is not a pack to mess with. The love, and loyalty of this pack is everything. Yup, so count me in.…and dibs on the house next to Gator’s, because I definitely want to be the first to get his food. The man can cook, and you know I am all about that. Billy is all grown up, he was the only human child among the pack in the first generation. I loved that she wrote his book first, it did not disappoint. It starts out fast paced right from the first chapter, and at one point my heart was pounding, it was just crazy good. Their first meeting was anything but normal, but it turns out to be so much more. It’s the turning point for these two, and a bonding experience they will never forget. Fantastic storyline, and writing. Safe read, with Billy all grown up, and his sweet but fierce mate. These two were sweet, but passionate. I am so grateful she took us back to this pack, I can’t say enough about this series. We get to fall in love with the Salvation Pack all over again. So everyone, welcome back to the Salvation Pack, and enjoy. Thank you NJ Walters for bringing back this amazing pack family, because they were definitely missed.

Salvation Pack is one of my absolute favorite series. My go to re-reads. I was so excited when I found out there would be more. Billy’s story did not disappoint. Completely exceeded my expectations. Such a wonderful storyline. I can’t wait for the rest of the kids.

The Salvation Pack is back with the next generation and Wolf in the Woods grabbed my from the first page to the last. An old enemy pack adds to the drama, and a visit with my friends in the Salvation Pack made this a must read that I couldn’t put down! Thanks to N j Walters for yet another great read, and if you don’t have yours yet grab it right now!