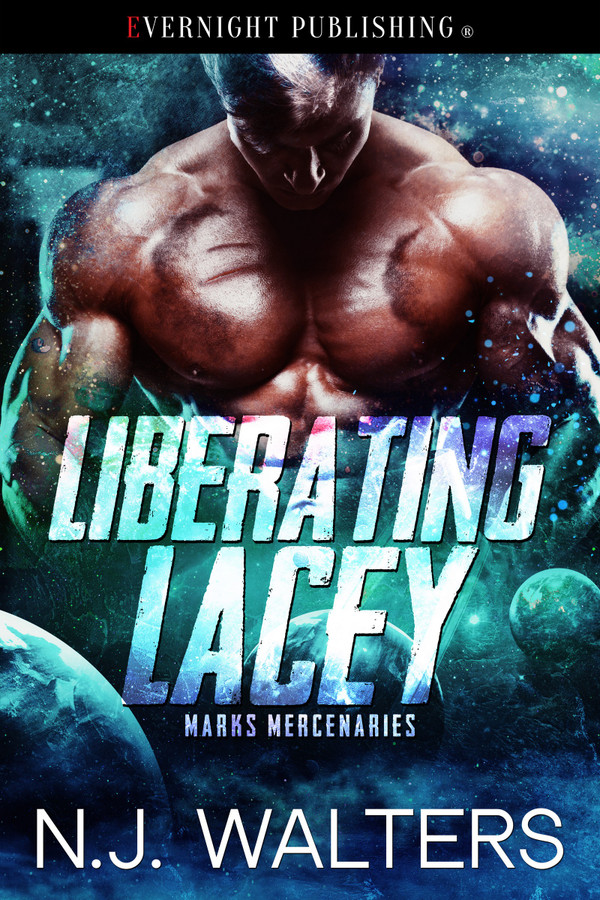 Garth Marks and his brothers are space mercenaries and traders. Their life’s mission is to find their younger sister, who was kidnapped ten years before. Their search has led them to Eden, a planet that is home to a cult-like group.

Lacey Freshlan wants to get away from Eden, and the strangers who have come here might be her ticket out. Garth is willing to use the sizzling attraction between them to get information from her, but he won’t agree to take her with him. As much as he’s drawn to her, Garth won’t risk the safety of his family.

When Lacey foils a plot to poison them, Garth takes her with them when they flee. But they are not free yet. Betrayal and lies lead to a battle not only for their safety but also for their hearts.

Where is he? Lacey stopped and listened, but heard nothing beyond the whisper of the wind in the trees, the hum of the insects, and the various calls of the birds. Maybe he’d headed toward the homes.

She spun around to go in that direction and ran right into a hard, unmoving surface. Bouncing back, she would have fallen if a strong, male hand hadn’t wrapped around her arm, stopping her from sprawling on the ground.

She looked up and into the blue eyes of the stranger. That particular color had always been associated with the sky of Eden and heat. She hadn’t realized, until now, it could also be bitterly chilly.

“Why are you following me?” he demanded.

A shiver went down her spine, but it wasn’t because she was cold. No, she was suddenly very hot. What was wrong with her? Why was she reacting to this stranger so strongly?

She licked her lips and cleared her throat. “Following you? I was just looking for birds.” That sounded plausible, and with her young looks, she often played dumb to get herself out of trouble.

The stranger frowned but didn’t release her arm. “You were sneaking through the woods behind me.”

How had he known? She was as stealthy as any native animal when it came to tracking through the foliage. It was the only way she managed any freedom at all. No one heard her when she made her way through the woods. No one. Yet this man had.

Who exactly was he?

She thrust out her free hand. “Lacey Freshlan.”

He grunted and continued to stare until she lowered her hand. “Okay then.” She wiped her sweaty palm on the leg of her pants. Time to go on the offensive. “Where were you going? Can I help you find anything?” She’d been told her voice was sweet by far too many would-be suitors, whom she’d managed to discourage by acting oblivious to what they wanted. She didn’t know if it was true, it was just her voice, but right now she’d use any advantage she could get.

This entourage could be her way off this planet. If Jasper were here, she wouldn’t have a hope in hell of getting away. As a master gardener, she was much too valuable to the community.

But with her parents now dead of a virus that could have easily been cured by modern medicine—which Jasper and the group abstained from—she was all alone. And each day her position became more and more precarious. She’d be forced to wed soon, one way or another.

She had to get out of here. And desperate times called for desperate measures.

The stranger kept staring at her, as if he couldn’t quite figure her out. She almost snorted. She’d been getting those kinds of looks as far back as she could remember, even from her own parents.

“How long have you lived here?” he asked. His voice was a low rumble and seemed to vibrate deep inside her. Now it was her turn to stare. He was big and strong and deadly. And it had nothing to do with the powerful weapon he wore over his shoulder or the second blaster strapped to his thigh. No, it was the man himself who was dangerous, much like the mountain lions that lived in the north, only venturing down to the settlement when they were starving.

He shook her lightly. “Answer me, girl.”

His gaze narrowed, and there was no outward show of emotion, but intensity and something close to excitement seemed to permeate from every cell of his body. “Then you know everyone here.”

It wasn’t a question, but she nodded. “To some degree or another.” His lurking suddenly made sense, the reason behind his actions becoming crystal clear. “You’re looking for someone?”

He grabbed her by the shoulders and lifted her right off the ground until her feet dangled in the air and they were nose to nose. She swallowed heavily. This man could snap her like a twig. This was not someone she could manipulate. It was better to play things straight with him. It gave her better odds of coming out alive, maybe even getting off of Eden.

Disappointment snaked through her. Not that she should care that he was looking for a woman. A man like him would have a woman, of course he would. Looked like good old Jasper had finally stolen the wrong person.

“Tell me your name.” It’s the least he could do, all things considered.

His frown deepened. It seemed to be his default expression. There were lines between his dark brows, his lips were compressed, and his jaw was taut.

She shrugged, or tried to. It wasn’t easy with him holding her in midair as though she weighed no more than a silversong. “You want information. I want to know who I’m talking to.”

His name was blunt and strong, much like the man himself. “Pleased to meet you, Garth Marks.”

He tilted his head to one side and studied her intently. She feared he could see inside her to her very soul, to all the hope and despair that resided there.

“What do you want, Lacey Freshlan? Because you want something.”

The man may look like nothing more than a muscled bodyguard, but he was proving to be both intelligent and astute. “I do want something.”

“Credits?” He seemed disappointed. He set her down quickly, as though he couldn’t get away from her fast enough. Well, he was in no position to judge her, not while skulking around with ulterior motives. He didn’t know her story.

She buried her hurt, not knowing why she cared what he thought of her. He was no one. A possible conduit to freedom and nothing more.

“I want off of this godforsaken planet.” She couldn’t help but glance around, terrified to have finally admitted her biggest dream out loud. She expected Ian or a member of the community’s security force to come charging out of the surrounding forest and snatch her away for daring to say such a thing. It would be considered blasphemy of the highest order. The sentence for such a thing would be harsh. Most likely a forced marriage since they couldn’t kill her. Her skills were too valuable to lose.

“And what will you do to get what you want?” Sheer menace coated every word.

Lacey swallowed hard, her mouth and throat dry. Then she looked him straight in the eye. “Anything.”

Along with his brothers, Garth Marks are a mission to find their younger sister and their search has them to Eden, the home of a cult-like group. Lacey Freshlan wants to get away from Eden, but while Garth is willing to use the sizzling attraction between them to get information, he won’t agree to take her with him. But when Lacey foils a plot to poison them and they have to flee for their lives, all bets are off. The Marks brothers’ are one step closer to finding their sister in this super exciting romance. Garth and Lacey are perfect for each other with some out of this world chemistry and a romance that is sweet with loads of passion although the relationship has a major obstacle – Lacey is part of the cult like group that they are investigating which causes some emotional angst and excitement. The story proceeds at a fast pace and keeps readers glued to the pages with lots of thrilling suspense and an informative and fascinating visit to Eden. This story may be short but it super sweet and blazingly sexy with explosive excitement to spice thing up even more.