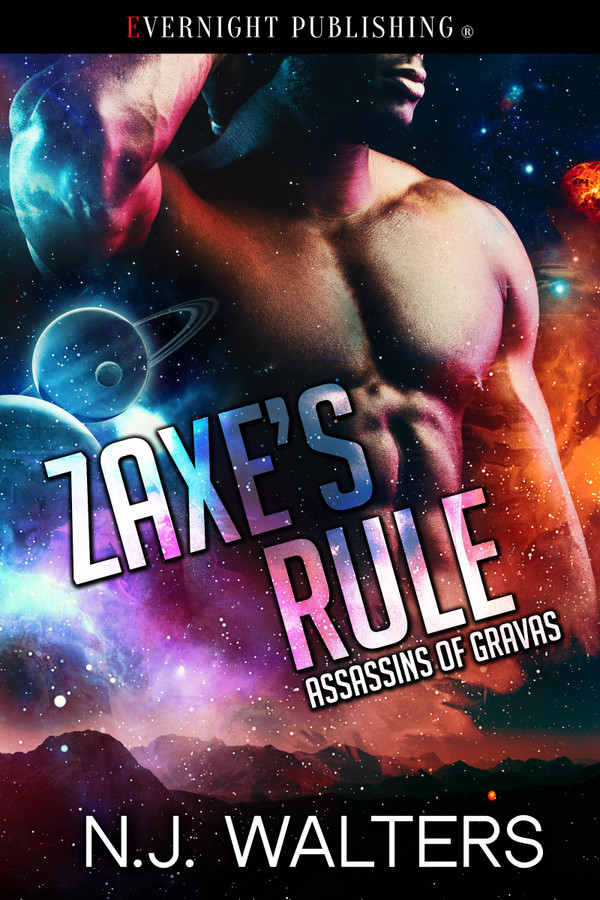 A professional assassin, Zaxe’s job is to kill his target—Helldrick—and get out. This final mission will repay his debt to the king of Gravas and allow him to finally claim his freedom. The job should be simple, but then he crosses paths with Jamaeh Jerman, the daughter of his target.

Being a mixed-race bastard, Jamaeh’s life has never been easy, but she’s carved out a living as a trader. Her entire life, she’s protected her brother. Now he’s missing and Helldrick is to blame. Her goal is to find her brother and bring him home.

She and Zaxe join forces, each with their own agenda. Danger and secrets from the past threaten to come between them, while their sizzling attraction further complicates the situation. Will mistrust drive them apart or will love save them both?

Jamaeh pretended to study the colorful scarves for sale at a stall, but all her attention was on the tall stranger by the harira vendor. She’d lived in the city of Badwa her entire life and was as familiar with the marketplace as she was her own home. Strangers were common, but this one stood out, in spite of him looking like a local.

There was something about the way he moved, his alertness that set her on edge. He was no merchant or trader. A smuggler or a mercenary, if she was taking bets. Just the kind of man her father might do business with. And right now, she was looking for any scrap of information that might help her find him.

“You buying or just looking?” The voice was sharp, the tone filled with derision. The young woman manning the stall didn’t even try to pretend to be cordial. Jamaeh was used to it. Growing up as a child of mixed heritage was bad enough. Being a bastard child in a world that prized family only made it worse.

“I’m buying.” She held up the light fabric saturated in tones of orange, yellow, and red, all flowing together like a brilliant sunset. It could be worn as a headscarf, wrapped around the neck, or draped over the shoulders as a light shawl. It was truly a thing of beauty.

“One hundred and fifty amants.”

“Fine,” the vendor hissed. “One twenty-five.”

“One hundred, because of the insult.” Jamaeh held her ground, staring at the woman until she glanced away.

It was still overpriced, but she really wanted it. She dug out the money, paid, and wrapped the scarf around her neck. Too many times when she’d been growing up, she’d only been able to look at the beautiful things adorning the tables in the market. Scrounging enough food to eat had been a priority.

As she walked away, she cursed herself for her weakness, for allowing herself to get waylaid by something so frivolous. She removed the scarf from around her neck, folded it, and slid it into the front of her shirt for safekeeping.

Ducking between two stalls, she crept around to the back of the harira stall where the stranger had disappeared with the vendor. The murmur of voices got clearer the closer she got. Crouching, she edged her way along, careful not to make a sound.

“I knew your father.” It was the old man talking.

Silence, followed by the faint whistle of a tea kettle boiling and then the flow of water. The vendor was making mint tea for his guest. Jamaeh’s stomach rumbled, reminding her she hadn’t eaten yet today. She’d meant to grab something in the market when the stranger had caught her attention.

“Thank you.” Chill bumps raced down her arms at the sound of the stranger’s voice. Deep and low, it seemed to vibrate through her. She placed a hand on the ground to steady herself and took a shaky breath.

What is wrong with me?

Having this kind of reaction to a stranger, to anyone, was unheard of. She should leave. There were plenty of places to dig up information, and she was familiar with them all, but curiosity shackled her feet to the ground.

Who is this man? Why is he here?

“Where have you been all these years?” the vendor asked.

Jamaeh inched along the back of the stall, searching for a rip in the heavy canvas or a crack in the wooden frame supporting it. Her diligence was rewarded with the tiniest hole. Leaning in, she placed her eye against it and sucked in a quiet breath.

Her vantage point gave her the perfect view. The area was small and comfortable, but the stranger dominated it simply by his presence.

His hood was down, displaying a thick crop of black silky hair. Even though it was cut short, there was still a hint of a wave in it. His sunshades were tucked into the neck of his shirt, allowing her to get her first good look at every inch of his face. And what a face it was. Strong was the word that came to mind. His chin was square, cheekbones heavy slashes, forehead high and wide. It gave him an almost austere appearance, as though life had honed him to a very sharp edge.

Sitting cross-legged on one of the oversize pillows the locals used as seats, he appeared quite at home. The pottery tea cup looked tiny and fragile in his big hand. Though at rest, he reminded her of a wild cat, every muscle coiled and ready to spring at any given moment.

He wasn’t handsome, in the traditional sense, but he was compelling. Wild and strong and dangerous.

The vendor, who sat across from him, bowed his head. “My apologies. I did not mean to pry.”

“No, it is I who must apologize. You said you knew my father?”

“Not personally, you understand, but I knew him. Such a great man. So missed when he passed. He and your beautiful and kind mother.”

Who were they talking about? Who were his parents?

The stranger’s gaze drifted over the interior of the stall. She held her breath as it passed over her, worried he’d sense her presence. When he lifted his cup and raised it slightly in her direction, she jerked back and swore under her breath.

How? Years of training had taught her to be stealthy, to move unseen unless she chose otherwise. The back of her neck tingled, a primitive warning of danger she’d never failed to recognize.

Time to go. She’d pull back and trail him from a distance. She couldn’t resist one final close-up glimpse. He was still looking in her direction. One corner of his mouth was tipped upward.