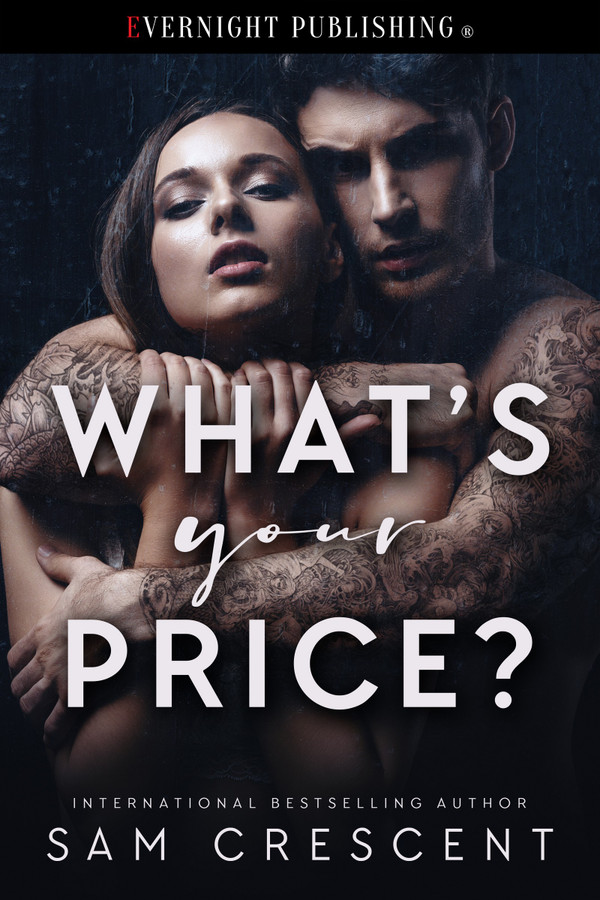 Gabe Moore gets everything he wants, and right now, he’s got his sights on Laura Smith. Unlike any other woman, she’s not intimidated by his power. His wealth doesn’t delight her. Only when he fires her does he get her attention.

The harshness of life has taught Laura she can only rely on herself. This crime lord monster won’t make her beg. If he wants her, he can have her, but she’ll never fall in love with him.

For the first time in his life, he’s the one doing the chasing. Laura won’t let him into her heart, only allowing sex. He’ll possess her body, but what he really wants is to own her heart, where he sees the pain she tries to hide.

He’s fifteen years her senior, but she's the woman he’s been waiting for, and there’s no way he can let her go—even if it means putting her life in danger to be with him.

“Hello, Laura.”
“Why?” she asked.
“Excuse me.”
“The gifts. The jewelry. I can understand all of them. Little trinkets in an attempt to buy me off.”
“All of which you didn’t accept.”
“I have no reason to,” she said. “My work. My home. Make your calls. I want my job back. Now.” She took a step toward him as he rounded his desk and leaned against it. His arms were folded, and she hated that he looked amused by this meeting.
“You haven’t mentioned your social media page.”
“I don’t give a fuck about them. They don’t pay the bills. My job, which I’m really good at, does. I want it back. You’re in the wrong.”
“You think you’re going to tell me.” He stood up.
Most would be threatened by him. She knew in the back of her mind she should be screaming at herself to stop and back down. But this was her livelihood.
The sane part told her to run and hide.
The crazy part forced her to take a step forward, toe-to-toe with him, and stare him in the eye. “Yes. I’m telling you to make the call and give me back my job.”
“Why?”
“Because it’s not my job you want.” She put her hand on his jacket. She gripped it tightly and tugged him close so they were flush together. “I don’t need pretty toys, Gabe. Nor do I need you to take my job, my independence away.” She leaned in close so her lips brushed against his ear. “If you want to fuck me, then do so.”
With her other hand, she cupped his dick, finding him already rock hard.
Flicking her tongue across his ear, she bit down. Not too hard.
“Or are you not man enough to ask?”
Gabe grabbed the back of her neck and spun her around so she was bent over his desk. The movement caused some items on his desk to spill to the ground. He pressed his pelvis against her ass, and even though she was angry at him, she felt an answering pulse between her thighs. As much as she hated to admit it, he aroused her. She’d spent many times the first two weeks touching herself, imagining it was him.
His lips pressed against her neck. His teeth scored against her flesh and she moaned. “What do I get out of it?”
“You’re used to taking what you want or women bending to your need. I don’t need pointless gifts, nor do I need my livelihood taken from me. You want to fuck me, just ask.”
“What about if I take?” He pressed a hand between her thighs.
The grip he had on the back of her neck kept her still. He groaned. “Fuck, you’re wet.”
She spread her legs so he didn’t have any obstruction. The panties she wore were torn from her body within a matter of seconds.
Sinking her teeth into her lip, she tried to contain her own pleasure, but it was no good. His fingers stroked between her slit, lightly touching her clit before moving down to plunder into her soaking wet cunt.
He used two fingers, stretching them out before slamming in a third one. She thrust her pussy against him.
Gabe let go of her neck to tug the edge of her skirt up and over her ass. She’d worn a pencil skirt that was tight to the body, but the fabric had some stretch to it, making it easy to pull up.
He groaned as he exposed her ass.
Flicking her hair over one shoulder, she glanced at him. “Fuck me, Gabe,” she said.
He twisted his fingers, hitting a spot inside her that had her closing her eyes and sinking her teeth into her bottom lip.
She was so close to an orgasm, so ready for it, but he denied her. He pulled his fingers from her pussy and trailed them back to her anus. She tensed up as he pressed a single finger against her ass.
Laura cried out, turning away, but not before she saw him spit onto her ass and then push a digit inside her. There was a burn but an undeniable hit of pleasure as he pressed in and out.
The hand on her neck returned and pulled her back up. A finger deep was in her ass as his teeth sucked at her neck.
“I will make the calls, give you back your job, but you belong to me. Your body is mine to do with as I please. Every single part of you belongs to me.”
She whimpered.
“That is the only bargain. You get what you want, and I own you. Every person has a price, Laura. What will yours be?” he asked.

This book was Phenomenal! I absolutely loved it from beginning to end! I thought it was different from Sam&#039;s other books and can&#039;t wait for the next book to come out!! A definite must read like all of her books!!

This book was really surprising. It features Gabe and Laura, who both suffered a very harsh childhood, but did what they had to do in order to survive. From what they&#039;ve experienced, both Gabe and Laura have a dark past that they didn&#039;t want to talk about, but they find comfort in each other because they understand the pain. Gabe is a mob boss who rules with violence and money, but falls in love with Laura and wants to do everything he can to help her and make her his. Laura doesn&#039;t trust anyone and keeps people at an arm&#039;s length. After some time, Laura begins to accept Gabe as he shows her what he&#039;ll do to protect her. The ending was also very good. I definitely recommend this book.

A quick but very hot read!!! I loved Laura and how she totally stood up to Gabe. She&#039;s been raised in the foster care system as long as she can remember and she&#039;s kept things locked up from her past. Gabe runs the whole city and when he sees Laura, he immediately wants her but she refuses him at every turn. She sends gifts back and while she&#039;ll talk to him, she won&#039;t let him control her. She&#039;s swore to herself that will never happen again. So what happens when he takes steps and she loses her jobs and her rent is suddenly raised? Laura knows who is behind it so she makes a deal with him. What kind of a deal you ask? Well, you&#039;re gonna need to get the book to find out but I loved her whole attitude and over time, I came to love him as well. Yeah, he was a jerk at first but then he realized how special Laura is. Can he win her over and make her believe in love?