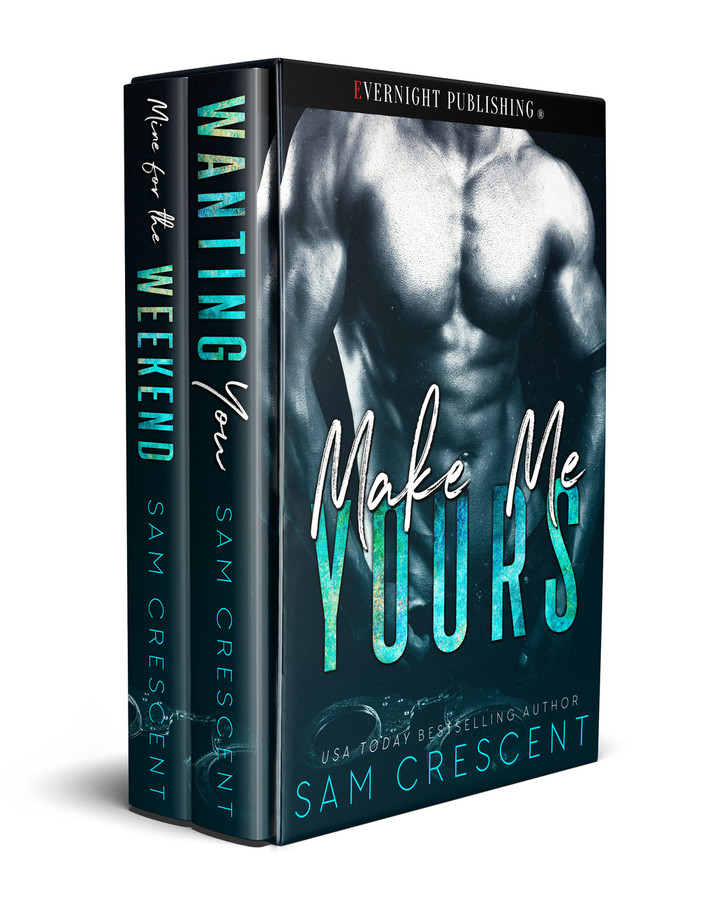 She wants him, even if only for a moment. He wants her … for a lifetime.

At Darkest Dreams, a club for people with “certain tastes”, Avery watches the mysterious Master Dominic. She wants him, but there is no way she can have him. He’s so far out of her league, and he probably doesn’t even know her name.

Dominic warns everyone to stay away from Avery. She belongs to him, and him alone. The club’s other Doms, however, issue an ultimatum: take her now or lose her. So he offers her a relationship contract they can both enjoy.

Neither Avery nor Dominic want a relationship based only on a contract. The chemistry between them is too strong. Can they survive the changes in their relationship? Or will Avery run away when the truth about Dominic comes out?
#2 MINE FOR THE WEEKEND

Sold for one million dollars…

Emily is shocked to hear that the ex she walked away from has just paid a huge sum of money for the pleasure of her company for one weekend. After seeing her parents’ disaster of a marriage, she doesn’t do commitment, and she doesn’t trust men.

These are previously published works (Darkest Dreams and Sold to the Highest Bidder). They have been revised, edited, and combined for Evernight Publishing.
Excerpt:

If Emily didn’t have him soon, she’d die with need. The moment his voice filled the auction room she’d been a goner. Jason Young was the best damn Dom in the world as far as she was concerned. He knew what to do with her body, and more times than not he had her screaming with orgasms for hours. His cock pressed against her pussy. Why had she walked away from him? Feeling his shaft pressing against her brought to mind so many brilliant memories. Their time together had been amazing. Jason made her want things she’d never known existed.

He nibbled her neck and unbuttoned the coat covering her body. She’d buttoned up the jacket instinctively. Jason never liked another man staring at her. He could be rather possessive at times.

“You spent a million dollars on me,” she said.

“It’s for a good cause. I wasn’t letting one of those bastards play with you. You’re mine. Always have been and always will be.”

She shut him up with a kiss. He put her on her feet and then tore the jacket from her body. She heard the fabric tear. Emily didn’t care. Her body was on fire for him. She reached for his shirt, pulling it off and then going for the belt holding up his jeans.

Jason tore off the small bikini she wore. Emily stood naked as he stepped out of his jeans. His long, thick cock throbbed. The vein along the side stuck out hard with each pulse of blood flowing into his shaft.

The tip leaked copious amounts of pre-cum. Her mouth watered for a taste of him. She’d missed this and him. Jason always found ways to get past her defenses.

“I see what you want, baby.” He pressed her against the wall. His large hand cupped her cheek and then sank into her hair. “But first I’m going to fuck your gorgeous pussy.”

His lips slammed down on hers. Jason ravished her mouth with kisses. He nipped, sucked, and thrust his tongue into her mouth. She moaned, submitting to what he did. There was no negotiating with him. Jason was not a selfish Dom. She’d be screaming with pleasure in no time.

Their naked bodies rubbed against each other as they kissed. She wanted his dick inside her.

2 very seriously hot sexy stories. I adore everything sam writes and theze two amazing stories are no different. Love them... I voluntarily reviewed an Advanced Review Copy of this book.

WOW ! Two amazing BDSM stories in one boxset. I loved them both and didn&#039;t want them to end! WOW ! Two amazing BDSM stories in one boxset. I loved them both and didn&#039;t want them to end! 1 - Wanting You - Previously released as Darkest Dreams. This is the story of Avery and Dominic. A Dom and a sub who after a year of longing for each other but not acting on it decide to take the plunge and begin a relationship to explore what is between them by basing it on a contract. They both soon realise that they want their relationship to be about so much more than just a contract. The chemistry between them is undeniable and when they both give in to their darkest dreams they can discover that anything is possible. A great read that I thoroughly enjoyed and know you will too! Happy Reading! 2 - Mine For The Weekend - Previously released as Sold To The Highest Bidder. This is where we meet Emily and Jason a true fated pair if ever there was one. Emily walked away from Jason once before and soon realised that it was the biggest mistake of her life but in an effort to move forward she is stunned when he turns out to be the very man that bids on her to have her as completely his for the entire weekend. Jason knows he has only this weekend to convince Emily of what he already knows. That they belong together and should always be together, he just needs to make her see he is nothing like the demons she is running from. Another fabulous read by the amazingly talented Sam Crescent. I really enjoyed it, Happy Reading!

Honestly, I&#039;m not fan of BDSM genre. I like kinky stuff in my books, don&#039;t get me wrong, but there is some lines for me. And Sam managed to tip toe that line very well with both books. WANTING YOU ☆☆☆☆ I have to say, I like Dominic. Despite him dragging his legs for a year before finally making a move on Avery. I&#039;m not sure why they waited so long. I&#039;m not even sure they know. Maybe it wasn&#039;t time for them. Or they weren&#039;t ready to open up themselves. Because that&#039;s exactly what happens between them. It may started as a play, but it fastly progressed to something much more. And maybe they felt that it will be like that, so like I said they weren&#039;t ready for that before. I liked how Dominic helped Avery to explore kinky side of her desires. He was patient and like I imagine Dom should be with his sub, who was new at this lifestyle. And I liked, when he realized what Avery could be to him, what they could have, forever, Dominic didn&#039;t panicked. He just put a plan to win his girl. That only more endeared me to him. If you like quick, sexy read with light BDSM, I do recommend Wanting You. MINE FOR THE WEEKEND ☆☆☆ From the beginning, I wasn&#039;t sure how to feel about Emily. On one side, I could understand her fears, but on the other, I was irritated with Emily. That she let her fears to control her life and made her to walk away from something, that could be beautiful and forever. And when Jason still fought for her, for them, she still had a stick up her a**. Honestly, I got tired of her constant fighting and doubts. Emily even herself frustrated with her bulls***. Even like I said that partly I could understand her fears, but it played such a big part in her life, and the reason for it wasn&#039;t good enough for me. Jason... He&#039;s possessive and controlling. He&#039;s selfless and patient. He is amazing man and amazing dom. And honestly, I was actually hoping for him to find him worthy match. The one who would fight for him not against him. I kept wondering can Emily make it up to him? Well, you will have to find out.

Pretend for Me by Sam Crescent

You Belong to Me by Sam Crescent

What's Your Price? by Sam Crescent