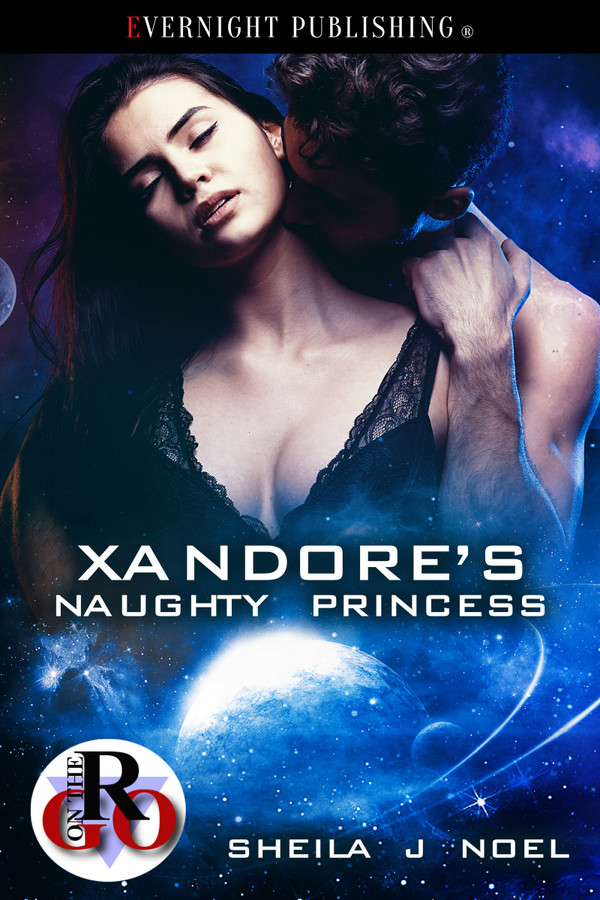 The planet is counting on Princess Ellegra and Prince Xandore. Their union will assure Procalus is welcomed into the Planetary Alliance.

Princess Ellegra is smart and beautiful and won’t take no for an answer. She understands her obligations and will make the best of her arranged marriage to Xandore. He thinks he can have his Artemisian cake and eat it too, that scoundrel. But she holds a few cards. Can she hold his heart and his fidelity?

Prince Xandore has always had his own way, so why should he stop now? He has led his planet to victory in battle but when it comes to commitment, will he ever be able to give Ellegra what she longs for?

Startled, Ellegra looked behind her to see a very handsome and very wet man smiling at her, obviously an Artemisian. She hadn’t noticed anyone swimming.

“Sorry to frighten you.” His deep voice was pleasant, friendly.

“Don’t be silly. I’m fine.” Except that she could barely breathe as she took in his broad shoulders, rock hard abs that drew down to a V, and black swimming shorts that were plastered up against… “By the light of Pharsis,” she gasped as the outline of his sudden erection became obvious.

She should really look away.

He took a step closer. “You are most definitely fine.” He took her hand, drawing a few lazy circles in her palm, then brought her hand to his lips. He turned it ever so slightly and began trailing little kisses along the inside of her arm.

For just a few seconds she watched, mesmerized. “This is not a good idea,” she said as she pulled her hand away. Ellegra looked along the shore to see if her security detail had finally located her, but she saw no one.

He chuckled. “You can relax. I set a security perimeter so that we will have hours of privacy. No one can penetrate it, and anyone looking in our direction will see nothing but the shore.”

That explained the deserted beach. She exhaled. He was expecting company. Luckily for Ellegra, he and whoever he was expecting hadn’t met before. “You must know people in high places.”

“I have certain connections.” He stepped closer.

She took half a step backward. “So, we are alone.” She should not be here with him. If anyone found out, her future and the future of her quadrant would be doomed.

Her life was always so regimented. Every minute of every day she was compelled to conform to what was expected of her. What if she allowed herself this one indiscretion? She deserved some fun.

He lifted her chin with his hand. It was still cool from his time in the water. Before she could think, his lips were on hers. He pulled her to him to deepen the kiss. Her hands encircled his neck both to steady herself and because she found she wanted to get closer. Before she could protest, he swept her up in his arms.

Ellegra nestled her body as close as she could to the handsome stranger. “I’m pleased they sent me someone so beautiful,” he whispered in her ear.

By the light of Pharsis, she was caught in the middle of a tryst. She should protest. She knew nothing of such matters. But she wanted this one adventure, and then she would go back to doing her duty to her quadrant.

“I have a comfortable setup just ahead.”

She didn’t mind that his body was still dripping wet. It felt good to be held by a man. He carried her to an elaborately draped structure open only to the water. White silks formed a canopy over a day bed piled high with silk pillows. The sheets had been turned down.

He chuckled at her gasp. “I know it’s quite opulent for the beach, but it will be far more comfortable than the hard sand.”

He set her down in the middle of sumptuous silk sheets, on an exquisite feather bed. She wondered how many Antillean spiders were needed to create so much luxury. She took in her surroundings, trying her best not to look in his direction. It felt wonderful to sit and enjoy the beautiful day. She dared herself to glance up at him. What harm could there be in one little peek?

“I’ll be a minute.” He winked, then turned away as if to say I made you look.

That one little glimpse was a huge, blackhole-sized mistake. Ellegra sat mesmerized as she watched him briskly towel dry his hair. His swimming shorts hit the floor. Thankfully, the towel moved to hide his muscular glutes, but not before she got an eyeful of sculpted thigh and calve muscle. Her hearts were beating at the speed of light. Her breath caught. She was headed for trouble—a delightful kind of trouble—and she was light years out of her depth.

He stretched out beside her, still bare chested, but his wet shorts had been replaced with black silk ones.

Ellegra knew she should run as far and fast as she was able.

Trouble was, she just couldn’t resist touching him. Tentatively, her fingers moved over his bare chest and over biceps that dwarfed her hands. His long dark hair was still wet so that the ends curled with the odd glistening droplet. She captured one between her fingers and smiled. Ellegra had never touched a man like this. She had never been permitted to be alone with a male who wasn’t a relative. “Your eyes are such a stunning shade of blue,” she said in wonder as she stared into their depths.

“You are far too sweet to be with the likes of me. But perhaps that’s your enticement.”

His lips sought hers hungrily, no longer patient with the game he thought Ellegra was playing. There was no way she could stop this now. She didn’t want to. So, she simply gave into the pleasure of kissing him.

I thoroughly enjoyed this sexy short story. Some sci-fi, mixed with romance, mixed with heat. It truly was a great read.

Naughty In Leather by Berengaria Brown