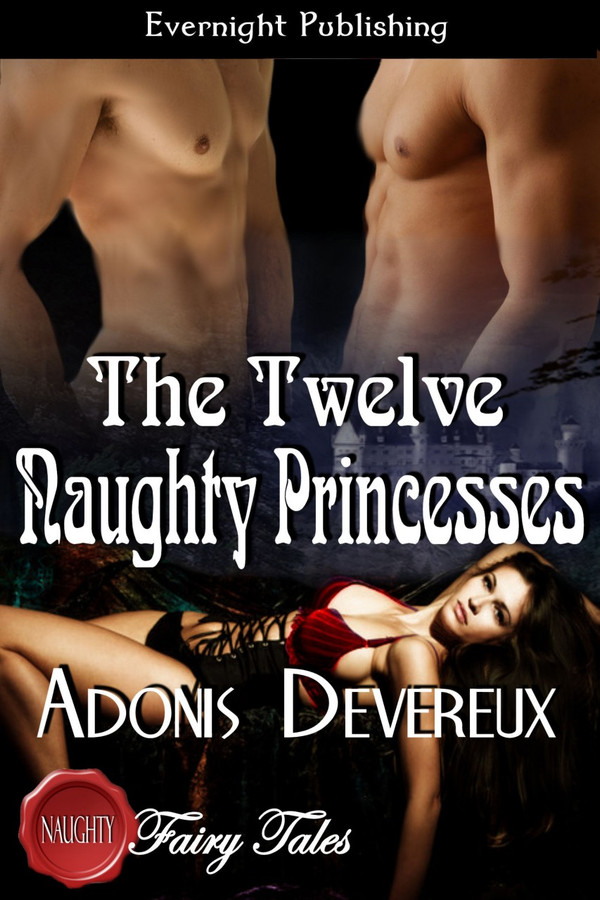 Max is a soldier down on his luck, and when the king sends out a call for volunteers to solve the mystery of the twelve dancing princesses, Max figures he has nothing to lose. Nothing, of course, except his head if he should fail. Max has faced death before and doesn't fear it, but when he meets the princesses, all lovely, light-hearted, and battling constant exhaustion due to their mysterious nightly escapades, he realizes he could lose his heart as well.

To win his princess, Max must break the spell. But he must face the truth that the twelve princesses are terribly naughty and do much more than just dance, and he will have to join in the amorous festivities himself to get them out.

Each princess chose two dancing partners, and an invisible orchestra struck up a waltz. The music fell like dew drops and moonlight over the room, coating everyone and everything in its beauty, doubling in Max his longing for Alaren. She fell into the arms of one of her partners, leaning back into his chest. He cradled her in his powerful arms, and they swayed together. The other man joined them, and Alaren was pressed between their flesh. They moved with the waltz, their feet unerringly skipping across the ballroom floor while their bodies undulated against one another. They moved like waves in the sea. Each thrust evoked a pull. When one exhaled, the other inhaled. Grab and swirl, push and grind, the dancers performed their sex-waltz. Max brought himself almost to climax before he stopped suddenly, letting his cock go as it twitched in anticipation of orgasm. He knew how to build up his cum for a final, explosive release. He grabbed his cock again and resumed stroking.
Perdita, the mistress of the ball, walked around to different trios of dancers and administered light spankings where she thought appropriate. Some of the twins she upbraided for not giving themselves to the night, for not dancing with all the passion they could muster. The princesses giggled and moaned, enjoying every moment of their punishment. Max wondered if some of them did not dance badly on purpose just so they could get spanked. After being disciplined, the twins danced with greater heat as they wiggled their buttocks on their partners' growing cocks. Perdita walked on, and the expression on her face reminded Max of a matron of a particular cat-house he used to visit regularly. Everyone had assumed that due to her severity, she hated men and wanted nothing to do with them. But Max had known better. Over her own protestations, he gave her a good fucking one night, taking her instead of one of her girls. That was just what she had needed, and he had known that. Whenever he went back there, he always fucked her. Perdita was much the same way. She looked stern and
intimidating, but Max knew all she needed – all she wanted – was a forceful cock inside her that would not spurt within the first minute of intercourse. Strong women had that effect on men. They needed even stronger men with even greater stamina to topple them and give them the orgasms they craved.
Max returned his attention to Alaren, and his cock regained its vigor. Alaren was the woman for him; there was no doubt about it. She was what he needed. Max lost track of time. He did not know how long he stood there jacking off, but the music finally ended. The princesses’ slippers were worn through. They must have danced for hours, but how time flowed in the faery realm Max did not know. He was still as horny as ever. The princesses were all covered in sweat, their hair drenched and clinging to her skin, their corsets moving up and down with their labored breathing.

Another excellent contribution to this series of Naughty Fairy Tales, and boy was it naughty! I&#039;m not familiar with the fairytale this one is based on, but I really enjoyed this version. Read it in one sitting, and needed a cold drink afterwards. Beautiful descriptions, fabulous word building, lots of hot sex, and an endearing love story. Great stuff!