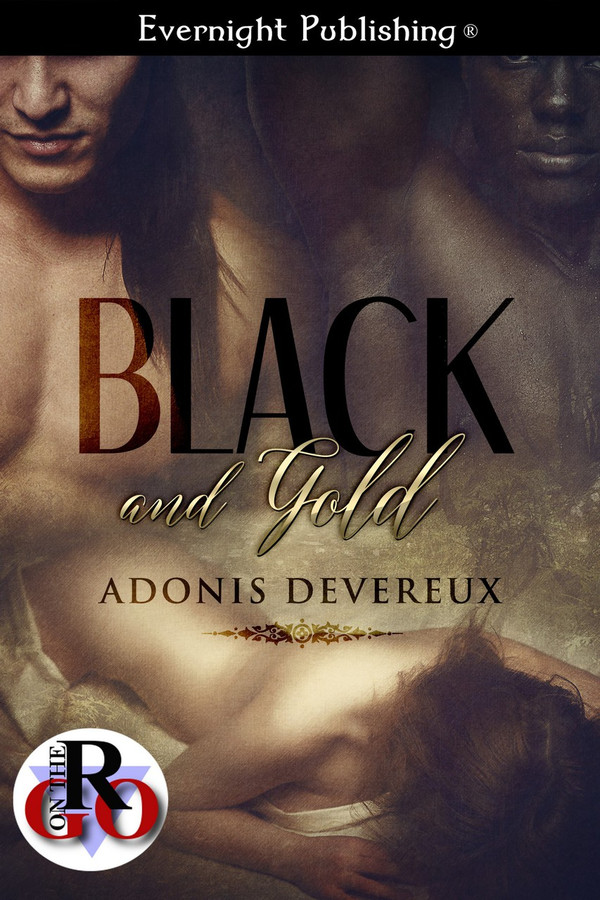 When Kesvar eloped to bond with her Dominant, Ilvar, she never imagined she could fall in love again—then the outcast Lord Stefanos bursts into her life like a dark thunderbolt. But how can Kesvar love both men?

Ilvar first met Lord Stefanos on the battlefield, and neither one could bring himself to kill the other. When Kesvar brings Stefanos home to her Dom, friendship soon becomes insufficient for the two warriors. But in a society where men are not allowed to be lovers, how can Stefanos and Ilvar find the words to show how they feel?

And where does that leave Kesvar? Is there a way for the three of them to live and love, or will they end up with three broken hearts?

There was no moon that night, so the two hunters could see every star in the sky. As the boar roasted slowly over the low campfire, Ilvar stripped off his sweat-soaked leather breeches. He stood naked near the fire and inhaled deeply. The smoke coming off the cooking meat smelled delicious, and the archer’s mouth watered. He knew it would be at least another hour before he and Stefanos could dig in, so he had enough time to bathe and relax.

“There’s a river down in the valley.” Ilvar thumbed over his shoulder.

Stefanos stood and stripped, too, and Ilvar took a long look at his friend’s fat, black cock slapping against his muscular thigh. “And I think I saw a hot springs pool on the opposite shore.”

Ilvar’s weary muscles ached for a hot soak. “Race you there.” And before Stefanos could even set off, Ilvar was already three strides ahead of him. The archer was easily caught, however, because he was laughing too hard to keep his pace. Stefanos tackled him around the knees and brought him down at the top of a grassy bank that rose from the riverbed. The two friends rolled naked down the hill, wrestling and laughing the whole way, until their hot flesh struck the cold water of the creek.

The shock took Ilvar’s breath away, and he jumped to his feet, all his muscles frozen. Stefanos cupped water in his hands and threw it at Ilvar, causing the archer to gasp again. A water fight ensued that was only slightly less epic than the boar hunt, and when it was over, the friends were sitting in waist-high water, their chests heaving from their exertion and laughter. Ilvar rubbed sand over his skin, and Stefanos did the same. The water wasn’t cold anymore, so they were comfortable taking their time to make sure they were clean all over. Once their tall, muscular bodies were rinsed, they rose up out of the river and found the hot spring on the opposite shore.

The spring was as hot as the creek was cold, and every inch of Ilvar’s skin sang in delight as he slowly immersed himself. The pool was deep enough for the water to come up to his neck as he sat in the smooth, rocky hollow formed by the spring. Stefanos released his breath in short bursts of exquisite torture as he sank into the pool. He cupped his balls in both hands and hissed as his large cock dipped below the water line, but once Stefanos was all the way in, he relaxed and smiled. His black body was invisible in the darkness of the spring, only adding to the mystery of his flesh which Ilvar wanted to explore.

Without a word, Ilvar and Stefanos both looked up at the same time at the black expanse of star-painted sky. With his body at last relaxed, the archer let his mind wander back over not only the day but how he met Stefanos the previous winter. When Ilvar met him on the battlefield, he’d expected to see some grotesque, savage butcher, not the beautiful, graceful warrior that strode among his enemies like a god among men. Weeks afterward, Ilvar still thought about his beautiful enemy, contemplating his dark eyes, his long hair, and his broad shoulders. And when next they met, their hearts just weren’t in the fight. Suddenly the war meant nothing.

Ilvar sneaked a peek over at Stefanos relaxing across from him in the bubbling water. His friend’s eyes were closed, and a slight smile played on his lips. Ilvar’s heart raced at the sight, but he swallowed hard at the thought of Stefanos not sharing his attraction. What would the proud archer do if his best friend didn’t love him the same way?