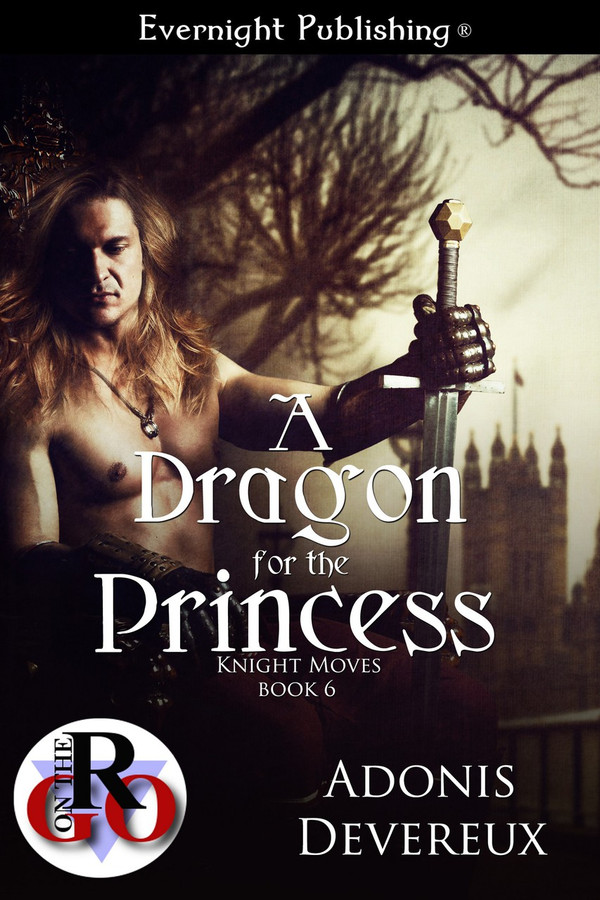 All Arthur’s knights have succeeded on the battlefield and in matters of love, but the King himself is alone. Just like he had to do with Guinevere, he goes to London intending to ask for the Princess’ hand, to make a political alliance for the good of the kingdom. But what he wants is love. More than a kingdom.

Katherine had been locked in the Tower of London most of her life because she won’t bow to the Prime Minister’s plans to remake Britain in her own twisted image. When Arthur sees Katherine, he knows he must try to win her for himself and not as a king. The princess doesn’t know Arthur’s real identity, but there’s no mistaking the force of his love.

Will the Dragon of Britain find a princess to claim his heart and not just his crown? And how can Katherine, the last scion of her house, expect to marry for love?

Arthur abandoned all caution, shouldered the door open, and rushed headlong into the room where he found a situation that didn't immediately register with his brain. What was happening? Arthur stumbled to a stop and blinked. A woman, the most beautiful woman he'd ever seen, was curled up in a corner of the room clutching her bruised cheek. She was crying and looking up at a man standing before her, his pants down around his ankles. Arthur stared at his bare ass. The man was still clothed above the waist. And he had a pistol in his hand. When he spun around to see who'd burst through the door, his flaming red, erect penis came into view.

“What villainy is this?” Arthur roared.

The half-naked would-be rapist aimed his pistol at Arthur and fired, but the king ignored the pain and leaped at his foe, bringing Excalibur down in one mighty swing. The blade sliced through his skull, clove his brain in two, and left his head split like a melon. The intruder stumbled back, shit himself, and fell to the floor, convulsing and twitching. The woman screamed at the gruesome sight, and Arthur, running to the bed, ripped the blankets off and threw them over the still writhing body.

“My apologies, lady.” Arthur extended his hand to the woman he assumed was Princess Katherine. He'd never seen her face, for she was always kept away from the media. “Sometimes sudden head trauma causes the body to flail about.”

The woman dried her tears, took his offered hand, and stood. Arthur got a good look at her, and her beauty made him forget about Guinevere forever. It was as if she'd never existed.

“Are you Princess Katherine?” he asked.

The woman nodded, and her bright green eyes cleared like the autumn sky after a storm. “You're one of Arthur's knights?”

Arthur opened his mouth to answer, and in that moment, his mind raced. His heart hung in the balance between his desire and his duty. How should he answer her? He was King Arthur, come to London to free the Princess and ask her to marry him in a political alliance for the good of Britain. But he was also a man, and as he looked at Katherine and admired how her long, red hair fell in waves over her shoulders, his aching heart flew to her and was lost. Arthur felt like a huge hole had been drilled through him, and he needed Katherine to fill it. He needed his heart back, but he couldn't have it unless she gave it. Arthur was in love for the first time. He thought he'd grown to love Guinevere before, but now that he felt what real love was, he knew he'd never truly loved his disgraced former wife. He didn't actually think of Guinevere. He just felt the lack by comparison. Like his eyes, his heart was full of Katherine, and he would win her for himself or not at all.

I have been looking forward to Arthur&#039;s story for awhile now. Katherine and Arthur were great together and I loved how the author changed things up and didn&#039;t use another has his mate. Another good story in the series!