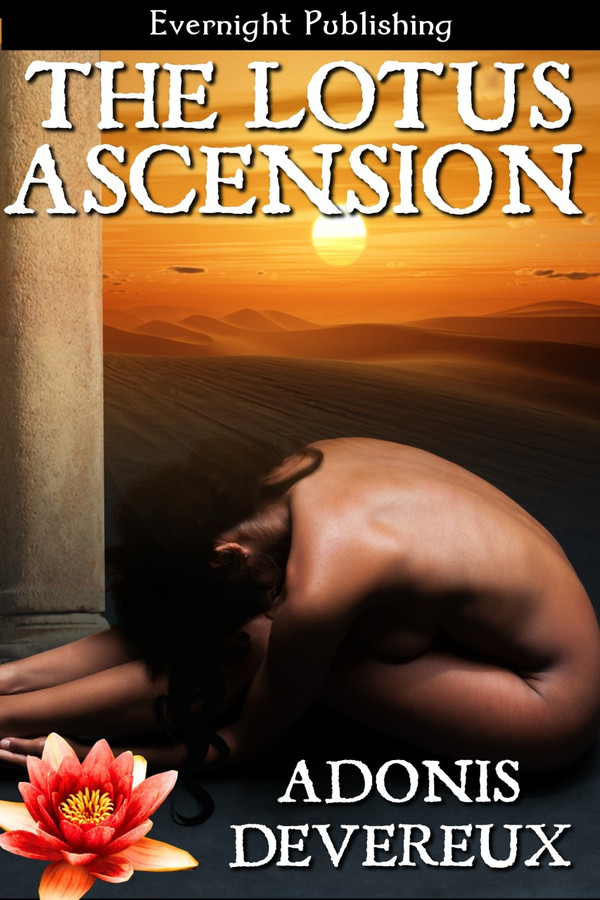 Konas Seranimesti was present eighteen years ago when the last Lotus in Arinport gave birth to twins, Soren and Sillara. Sillara was betrothed to Konas's brother the day of her birth, and Konas has fallen in love with his brother's promised wife.

But what can Konas do? Sillara is the daughter of a Lotus, and her life has been planned out in advance. She has never been allowed to choose anything for herself. But when her twin brother, Soren, who is himself feeling the pressures of his station, joins her on a desert hunting trip arranged by his best friend, everyone's plans for Sillara are ruined.

Lost in the desert and assumed dead, Sillara is given choices for the first time in her life, but how can she choose a love she has never recognized? Will Sillara's choice ruin Soren's chance for love? And can Konas win a heart promised to another man?

Soren had no more time to pursue his dark thoughts, for the shaking of the tambourines summoned everyone to the main tent. A male and female pleasure slave, clad in near-nothingness, stood at the entrance and greeted the revelers. Nathen gave Orien a light kick.

“Get up, sleepyhead. Delight calls.”

Orien groaned, squinted against the light, and rolled over. He rose, shook the sand from his massive, muscular frame, and stretched. His face broke into a wide grin. “Is it time to travel the marshes already?”

“Merieke brought plenty of herbs, so no one has to worry about bastards, so I am going to take one of the girls for myself. You all can fight it out over whoever's left.”

Merieke came, too, and her natural beauty shamed the crafted appearances of the pleasure slaves. She wore nothing save her jewelry, and even her brothers turned and gasped at her arrival. Gold and malachite earrings dangled from her lovely earlobes, and a wide necklace of gold and silver fashioned in the likeness of two birds' heads looking in opposite directions lay across the upper half of her breasts. Her lips were red as the ripest apples, and black wings of kohl rose from her eyes, giving her a cat-like look. Soren was almost convinced that she was purring. A belt of thin gold coins linked together hung on her hips, drawing his attention to her exposed and beautiful pussy. Clean. No hair. Just the way the Sunjaa liked it. But most magnificent of all was Merieke's headpiece, an ornate black wig decorated with cold-worked glass of varying colors.

No one responded, so stunned were the men by the sudden revelation of her charms.

Soren noticed that she held something in her hand, but whatever it was, it was small enough to be concealed in her closed fist. The only thing he could see was the long ribbon of silk that hung from her hand. It put him in mind of something fun, and with a grin, he walked over to a nearby casket and rummaged through its contents of toys in search of a blindfold.

Orien took one of the slave-girls and commandeered her. Due to Orien's unpleasantly oversized cock, that was no more than Soren expected. That left two male pleasure slaves, one female, and Merieke.

Merieke walked over to Soren, reached up inside his skirt without breaking eye contact with him, and grabbed his cock. “It's about time, don't you think? We've known each other all our lives, and still we haven't fucked?”

Soren untied his skirt and let it fall. “Well, I've been at sea.” He liked bantering with her.

Merieke's eyes glowed. “From what I hear about what you sailors do to each other at sea, I'd say you're more than ready to take what I'm offering.”

Soren grinned and ran his hands through his long hair, freeing any small tangles from his horns. “I'll make your first time with an Ausir something to remember.”

Merieke went up on her tiptoes and kissed Soren's mouth. “And I'll make your first time with me unforgettable.”

Soren smiled back at Nathen, who nodded his approval. Merieke's brother turned his attention toward a female pleasure slave, invited a male pleasure slave to join them, and moved off. Knowing that he was going to tell Sillara everything about this afterward, Soren resolved to thoroughly thank Merieke for her kindness in giving Sillara her first climax.

The part of Soren that was the attentive lover wished he had asked Nathen what kind of lover Merieke was, what she liked and disliked, and what she liked even if she did not know she liked it or just would not admit it to herself. But the other side of Soren, that adventurous side that liked a bit of a surprise, was glad to be sailing into uncharted waters. The sea had never looked more inviting.

Soren sensed that Merieke, in her excitement, wanted to lead, and he obliged her. He knew that some people dealt with their nervousness by overcompensating in matters of control. Soren could wait to assert himself; besides, he was happy to see what Merieke would do.

Merieke laid Soren down on a pile of soft pillows and leaned over him, arching her fingers in order to press her nails into his chest. Her hands played with Soren's body, traveling over his shoulders, and down his muscular arms. She traced the wide wings of the proud falcon tattooed beautifully across his chest. She leaned in closer to play with the hair at the nape of his neck, and as she tousled his locks, she kissed his throat. Soren moaned and relaxed into the pillows. Merieke only used her left hand. Her right hand still held her secret.

The passion of Merieke's kisses increased, and she, too, moaned as she rubbed her tits against Soren's skin. Soren kneaded her breasts, ending each long caress in a pinch of her nipples. He breathed deep of the spices in the fibers of her wig, and his cock surged to life. In moments it was achingly hard. Merieke trailed her kisses across his collarbone and down his chest. She stopped at his nipple for a nibble, and Soren thrust his cock up into her stomach. The hard shaft slapped against her skin, and she looked up into his eyes and smiled.

Her kisses continued down to his navel, and there she paused to lick. With her left hand, she reached down and grasped Soren's cock, working it in preparation for her tongue. She jacked him off against her throat, moving the head of his cock down her jawline and across her chin. Merieke's tongue flicked out, almost touching it but not quite. Soren smiled at her game. Soon it would be his turn.

Without warning, Merieke devoured Soren's cock, the pleasure of which caused him to suck in his breath and hold it. Her lips held his hard shaft against her ever-moving tongue. Her head bobbed up and down, and Soren groaned in pleasure to see his cock disappearing into the mouth he had wanted to fuck for so long. Merieke looked up into his eyes while she sucked. She knew exactly what to do.

But then something happened that surprised and impressed Soren, a man impressed by nothing where sex was concerned. Soren was so far more advanced than any of his lovers that no one had ever been able to catch him unawares in the bedroom.

Merieke did. As she sucked, she dropped both her hands below Soren's legs so that her hands were out of sight. Soren knew she was up to something, but he could not guess what. Then he felt something cool against his asshole, and he looked down in surprise. Merieke managed to smile while still keeping his cock in her mouth.

Soren was open to anything, so he trusted Merieke to please him. So far she was doing an excellent job. He relaxed his asshole and let Merieke slip inside whatever she wanted to put there. Whatever it was, it was not very big. Not as big as a cock. And then a most pleasing vibrating sensation filled his back passage.

I am still on the fence about this book after I finished it. I decided to take a couple of days and think over the book before I wrote my review. Soren and Sillara are twins that were born eighteen years ago. Their birth was a miracle because getting pregnant is few and far between. What makes it even more of a miracle is that they are twins which have never happened. Everyone knew from the day they were born that they were special. Each has a chosen path. Soren will rule after his parents death and Sillara will be married to a king. This is not your normal everyday read. When you read this book you need to take a whole day so that you can process everything. If you have any distractions then you will be lost and will never get the story. There was just so much going on in this story. There is corruption, sex, backstabbing, and adventure. There were many words that I didn’t know how to pronounce and just sounded them out the best I could. The children are from two different cultures and bringing them together would’ve been hard. The author did a wonderful job with characters and not getting mixed up. It takes an author that is really into their books and cares about the readers to write a book like this. I was taken out of my comfort zone and I am still trying to process everything. It was hard to know who to trust in this book and who would be with who. It just kept me guessing and asking myself, did that really happen? This book contains orgies, M/M, F/F, bondage, anal sex, and incest just to name a few. This isn’t really the kind of books that I normally read. So that is why I was having a hard time taking this book in. I didn’t give up. I just kept on reading it until I reached the end. I am still in shock. So if you like books that are out of the norm and you want something different then this is the book for you.