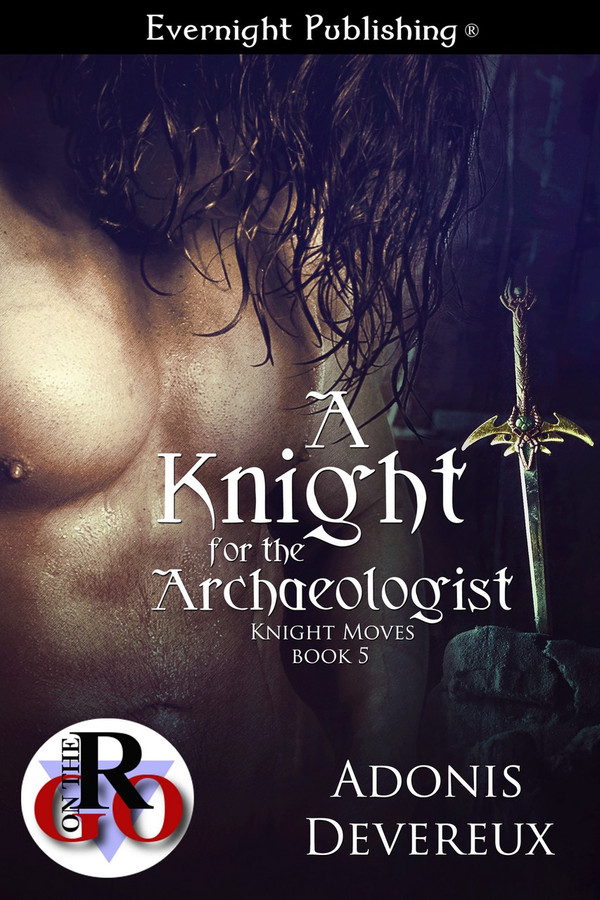 As King Arthur comes to Britain, his chief counselor, Bedivere, must make a covert mission to retrieve Excalibur from the loch where he threw it centuries before. Elspeth Duncan is an archaeologist specializing in digs to find Dark Ages relics. When Bedivere meets Elspeth, the brainy, curvy brunette throws the knight into a spin. He’s looking for an ancient, magical treasure, but he’s already found what his heart desires. With the help of the archaeologist, can Arthur’s most trusted knight recover Excalibur?

Bedivere stood and walked to the edge of his cell, and gripped the cold, steel bars. “We've got to get out of here.”

Bedivere waved his hand. “That was old even in my time. Nobody'd fall for that.”

The front door opened, and Bedivere scrambled back for his seat. The constable held a newspaper in his hand, and he walked back around to his desk and plopped down in his chair. This was getting tedious. With each moment, Alice got farther away.

The constable looked up.

Elspeth pulled her shirt and bra up so that her big tits bounced out. “I know how you've always looked at them, licking your lips and just wishing you could touch them.”

Bedivere just stared, and his jaw dropped open. He'd never seen a more perfect pair of tits, but he was more surprised that Elspeth had gotten them out for the constable.

Hamish jumped to his feet and rushed over. Elspeth moved so that her tits pressed through the spaces in the bars of her cell. Just seeing how her soft, white flesh pressed against the bars made Bedivere harder than any steel. The constable's back was to him, so the knight couldn't exactly see what happened, but suddenly Hamish went flying back. Bedivere leaped up and reached through the bars, catching the constable in his arms.

“You might not want to watch this.” Bedivere wrapped his strong arm around Hamish's neck, crushing his throat in the crook of his arm.

Elspeth pulled her shirt and bra down, and though she watched for a moment or two, she soon turned away when it was obvious that, in reality, it took a long time to choke someone out. It wasn't like the movies where the bad guy just falls unconscious after a couple seconds. Bedivere had to hold the struggling Hamish crushed against the bars, and the only sounds made in the full three minutes of struggle were Hamish's gurgling, the scuffing of his boots, and his knuckles banging against the steel bars.

Bedivere knew normal men couldn't choke someone out, because it took nerves of steel to hold someone down while they struggled to breathe, but the knight knew what he was doing. He had no intention of strangling the poor man, but he also couldn't have him chasing after them. With continued pressure against Hamish's artery, Bedivere felt the constable's body fall limp. He eased Hamish to the floor, grabbed his keys off his belt, and opened his cell. Then he opened Elspeth's. Before anything was said between them, Bedivere grabbed Elspeth and crushed her soft body against his hard one. His blood was pumping, and all his senses were on fire. He tasted her lips and raked his teeth across their sweet wetness. Elspeth threw her arms up and around his neck and fell into his kiss.

Bedivere explored her mouth with his tongue and kissed her ever more deeply. Once as satisfied as he could be in his current situation, he said, “How did you think to do that? I bet that was never tried before.”

I must say with each story I this series it gets more and more interesting. These two were paired well for one another and I enjoyed reading their discovery of one another.