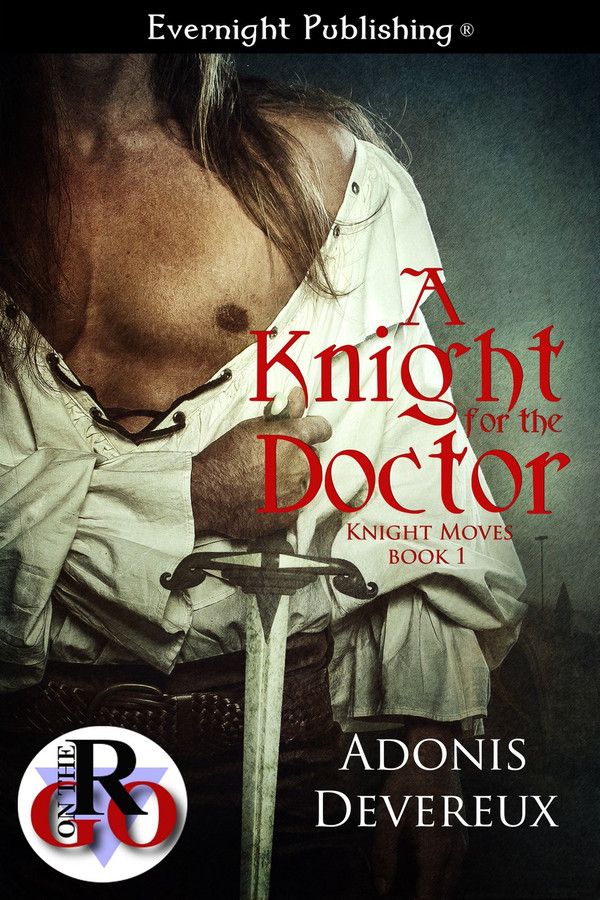 In New Britain, where the different are persecuted, the curvier-than-regulation Elaine is a medical student who has learned the truth of the new draconian “health measures” and is trying to help the swelling underground resistance.

But the underground isn’t the only organization to take notice of Britain’s plight, and Camelot sends out its greatest champion, Sir Lancelot, to investigate. Lance is jumped almost as soon as he sets foot in Scotland.

Will Elaine be able to save him, and will she escape the retribution of the New Britain government? And in this chaos, is there any chance for love for the knight or his doctor?

“About what, lady?” Those dark eyes were open again, and fixed on Elaine’s face.

The man nodded. “I shall endeavor to hold still for you, lady.”

“What’s your name?” asked Elaine, moving to kneel behind his head. “And this knife has a serrated edge, so…”

“I understand. And it’s, Lance. I am called Lance.”

“Lance.” Elaine had been feeling around the wound as they spoke, and now she had as good an angle as she would be able to find. Thirty-eight degree angle. Slow, steady, push down.

Lance gave a low hiss as she pulled, but he didn’t move, not an inch.

As soon as the knife was free of his flesh, Elaine dropped it to the floor. Water, alcohol. She felt about in the wound for any debris, and was relieved not find any. She washed the wound with alcohol a second time. Then came the stitches. There were many, so many Elaine felt the sweat beading up on her brow, and she was relieved when Lance passed out again.

He didn’t regain consciousness until she was wrapping bright pink bandages around his shoulder.

“My lord?” Elaine shook her head as she peeled off her rubber gloves. This was one item she had no trouble procuring, as they could be used for dyeing hair or other socially acceptable activities. She didn’t dare look at Lance’s dark eyes again, and she just sat down with an inelegant thump. Her legs were tired, and now that the adrenaline was wearing off, she could hardly keep her hands from shaking. “I’m sorry. I don’t know what you mean.”

“Your lord,” repeated Lance. “Your husband?”

Elaine closed her eyes and leaned her head against the wall. “I don’t have a husband. I don’t have anyone.” She chuckled bitterly, despite the tears that welled up in her eyes. “I don’t even have a house anymore, and you should probably leave here as soon as you can. I expect the Patrols will be here before too long. If they know my house, they’ll eventually find the hospital.”

“Who would dare to cast a lady from her home?” Lance’s voice held a fire Elaine hadn’t heard, even from the Wallace Brigade.

“Oh, it’s not that they threw me out. There is no homelessness in New Britain.” Elaine repeated the slogan with sarcasm. “It’s just that if I go home, the Patrols will find me. I’ll be taken to a clinic and ‘rehabilitated’.”

“But you are not injured or ill.”

“That’s not the point—” Elaine opened her eyes then and looked Lance fully in the face.

Big mistake, idiot. Good luck remembering how to talk. Lance’s chocolate gaze was fixed on her mouth, and she licked her lips. A burning ache started in her pussy, and she felt her cheeks begin to burn.

“Why else would you need a clinic?” asked Lance. “Britain is worse off than we had thought, if ladies like yourself cannot go home without being accosted by ruffians. You have never done anyone an injury in your life, I’ll be sworn.”

“You’ve met the Patrols.” Elaine gestured toward his wounds. “But did they see where you ran? Were you pursued? Do we need to get you out immediately?” Even as Elaine said the words, her heart felt emptier than her pussy. The very thought of Lance leaving hurt, and she wanted to slap herself. She had no business falling for anyone. She was a marked woman. It was only a matter of time before the Patrols caught her.

I thoroughly enjoyed this little tale, and look forward to more in this series. Such an interesting twist to an old legend :-)