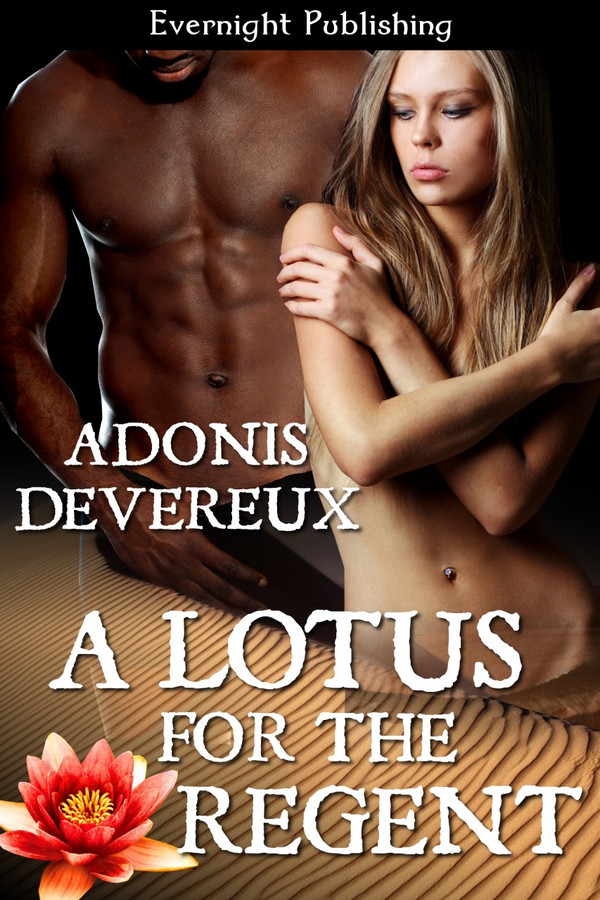 Six years ago, Kamen Itenu was made the Regent of the Sunjaa nation, ruling for a boy-king, and thus became the most powerful man in all the west. But Kamen is not just the Regent. He is also a man who has lost his first love, and he has never expected his heart to kindle again.

Ajalira is a woman trapped, one who, for honor's sake, sold herself to the Red Lotus Guild to be made into a courtesan and assassin. When war sends the Regent to the Guild, Ajalira's honor kindles Kamen's broken heart, but can even the love of the Regent protect Ajalira from her past? The war threatens to tear them apart, and Ajalira must choose between her past and her love, while her honor, more precious than her life, hangs in the balance.

“So, Lord Itenu has set his heart on the fair Ausir,” Darien said, smiling as he took long strides across the room towards them.

Kamen flashed Ajalira a grin and rose, embracing Darien by the forearm. “Ajalira, and she is to be my sole concubine.”

The slave hurried into the room.

“Let it be written,” Kamen said.

Darien snapped his fingers, and the slave laid out everything on a nearby table. “Let it be done.” Darien drafted the document.

Kamen returned to Ajalira's side. “What is your family name?”

Kamen did not know that name. “I'm going to sign the parchment, and then you will be mine. No law of gods or men can sunder us then.”

Ajalira reached up and touched Kamen's arm, running her fingers down over his bicep and across his abdomen. She sat up perfectly straight and leaned forward. Her every move was a confession of her desire for him.

Kamen looked over the document, and it read just as he wanted it to: that Ajalira would become his concubine, that she alone would hold that title, and that Kamen would take no wife to supplant her. Kamen filled in Ajalira's full name and then signed it with his own. Darien stood and hugged Kamen, picking him up off the floor in a bear hug. Ajalira laughed.

Kamen took a deep breath. “Thanks.” He walked back over to Ajalira, took her by the hands, and raised her to her feet. “I must take you now in the presence of the Lord Admiral. He must bear witness to the coupling, and then he will sign and leave.”

Ajalira nodded. Apparently she already knew this, but when she glanced at Darien, Kamen detected some measure of embarrassment in her expression. He resolved then to make it a token penetration. He would not fuck her in front of Darien the way Darien had fucked Saerileth in front of him. When he finished, he wanted to be alone with Ajalira.

Kamen laid Ajalira down on the bed and pushed her skirts up to her waist, exposing her bare pussy. His cock twitched as blood rushed through it, making it as hard as any spear. He pulled her knees up, took off his own skirt, and knelt between her legs. Ajalira looked down at Kamen's cock as he ran his hand down its length. She was already wet, so this would be quick.

“I cannot give you my virginal blood,” Ajalira whispered, her face a mask of shame.

“Don't think that way, my love.” Kamen leaned forward and kissed her forehead. “I know you were a Lotus, but that's all behind you now. As for my part, I hold your honor intact.”

Ajalira nodded, once again tears coming to her eyes.

Kamen shifted forward and laid the head of his long cock against her pussy lips. He flicked his penis up and down twice to wet it, and then he slipped the head inside her. Ajalira licked her tightly drawn lips and moaned. Kamen held his cock there, and though every instinct told him to drive himself all the way in, he resisted the temptation. That was for her alone. Besides, he had other plans first, plans of bringing out the sex kitten he knew was inside her.

Kamen turned back to look at Darien, and the Lord Admiral nodded. He signed the document, rolled it up, and took it away. Once he was gone from the room, Kamen removed himself from Ajalira and stood up.

Kamen reached down and scooped her into his arms. “Nothing. Now we can get started.” He stood her in the middle of the room, right in front of the four-poster bed, and paced before her.

“Is everything all right?” Ajalira tucked her blonde hair behind her ears.

Kamen stopped, turned, and grabbed the collar of her dress. He ripped it down the front, tearing the entire garment in half. Ajalira gasped but did not retreat. She laid her forearms across her naked breasts, which heaved in excitement, and rubbed her thighs together. Kamen yanked away the torn dress and ripped it again in half down the middle, dividing it into two halves. Ajalira craned her neck to watch him, but he only let a sly smile hint at his plans for her. He took her arm and raised it, holding it against one post of the bed.

“What are you doing?” Ajalira asked.

Kamen wrapped one piece of the dress around her wrist, tying it to the bedpost. He then did the same thing with the other wrist, and when he looked at Ajalira again, he saw wonder dancing in her eyes. She knew what was coming, and she loved it.

But she did not know—not quite. Kamen doubted any Lotus trainer was as good as he. Besides, they were all Zenji. Their cocks were not as big as Sunjaa's.

Kamen's erect, black penis bounced before him as he walked in front of Ajalira. “You shall forget every lover you've had before me. You shall come for this cock alone.” Kamen stopped in front of her and stroked his penis, and as Ajalira watched him, she squirmed and whined. “Oh, you want this?”

“Yours is the last pussy I'll ever have.” Kamen knelt before her and tapped on the insides of her knees, spreading her legs apart.

A Lotus and the Regent is the second book that follows the the keys characters that were first introduced to readers in The Soldier&#039;s Louts. This time it is six years later after the first book and focuses on Kamen and his love for an Ausir forced into becoming a Lotus. I have to say I am glad that the author gave us this story because at the end of The Soldier&#039;s Lotus the reader was left wondering what would happen to Kamen. He proved to be a kind and loving person who went through so much heartache that you wished for his happily ever after. I truly enjoyed how the author was able to tie in the other books in the series together and give the reader an understanding regarding the amount of time that had pasted from one book to the next. Even though each book deals with a different tribe they are all interconnected and the books provide a consistent flow in the passage of time (in this case hundreds of years have past from the time of Love Comes Twice). At first I didn&#039;t like Kamen in The Solier&#039;s Lotus as he tried to break up the relationship that developed between Darien and Saeri, but in this book he redeemed himself. Kamen proved to be a loving, kind, loyal and protective lover who would do anything to protect the one he loves. I found Ajalira to be a truly tortured individual who had to endure, in her eyes, shame and defilement all in the name of honour. Despite all the loneliness and pain that she endured she never gave up and kept her spirit to fight on which was very endearing. The loving relationship that developed between the two of them was just that: full of love and acceptance. The two not only found with each other what they had both been seeking, but also learned that despite all the obstacles that were thrown in their way that through perseverance and dedication their love would survive anything. Just a word of warning this book includes some very intense, hot scenes featuring some bondage, anal play and anal sex. I highly recommend this book to anyone who enjoys fantasy stories set in far away places where loves endures hardship and flourishes in the arms of a lover completely devoted to showing the other they are worthy of love. That is what you will find with the love between Kamen and Ajalira.

Bride for the God-King by Adonis Devereux