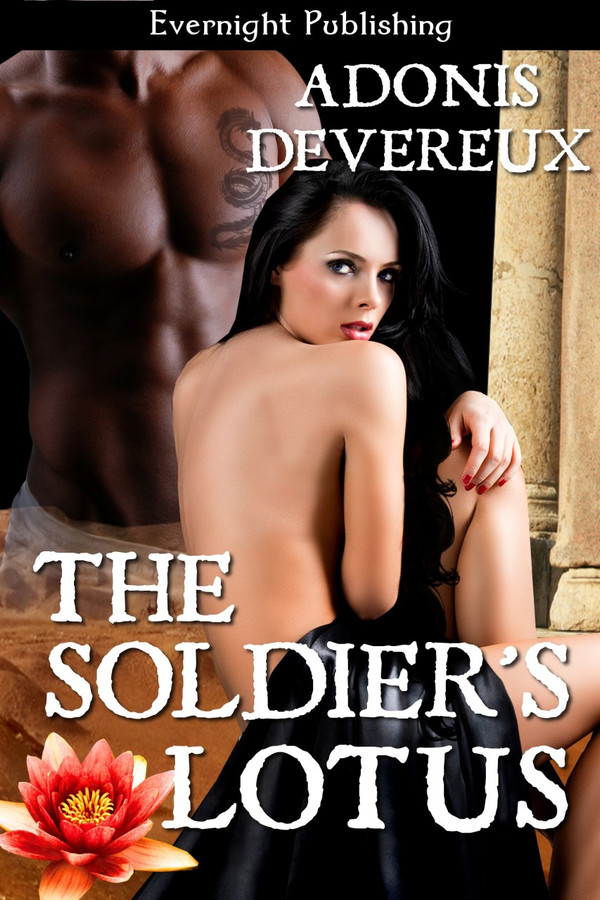 One death. Saerileth had trained all her life for one death. From the time her clan had been massacred when she was five years old, until now, thirteen years later, Saerileth has sought one death. Now that she has attained the rank of full-blown Lotus, she has been sent by the Red Lotus guild to the foreign city of Arinport. But Saerileth has other plans, and the one death she seeks is more to her than the guild's plans for her. Saerileth's plans go awry, however, when she meets Darien, the brave soldier from her past, whom she had never expected to see again.

Darien alters everything, simply by being there, and Saerileth is swept up into a world of intrigue and assassination that makes seeking her one death even harder. But her mission of vengeance is difficult to reconcile with being the soldier's Lotus, and in the end, Saerileth's choice will affect three nations.

“I must enter you now,” Darien said, and Saerileth’s eyes widened.

“To prevent my crew from taking you themselves and dividing you as common spoil.”

“Can you not just order them not to?”

Darien shook his head. “They found you. If I renounce salvage rights to you, they can claim them. The only way to put you utterly beyond their power is to make you my legal concubine.”

“Then why do you not just tell them I am?” Saerileth shifted on the divan and crossed her ankles.

Darien glanced back at Kamen who stood in front of the door and looked straight ahead, bending his concentration on the invisible air. He did not make eye contact with Darien. Something serious ate at him, something that had started the moment Saerileth came aboard.

“I tried that once,” Darien said, returning his attention to the girl he knew he must couple with. “There was no contract, no witness. I didn’t want to take the girl against her will, so I faked it. We Sunjaa are the People of the Word, as you probably know. If it isn’t written down and witnessed, it didn’t happen.” Darien did not enjoy talking about this, but he wanted Saerileth to understand. “Well, my crew went ahead and raped her anyway, and I wasn’t able to do anything about it. She was their salvage, and I had failed her.”

Saerileth stood and let her pallav fall. Darien drew in a long, deep breath. Her beauty was divine, every line and curve perfect. “Your pain is fresh, as if this happened yesterday. You are a man of deep feeling.” And she laid her hand on the bare part of his chest that lay exposed from his loose shirt.

Her flesh was still cold from the seawater, but her touch was like fire on his skin, sending hunger through him. “I will take you, then.” It was half statement, half question. He laid his hands on her shoulders, feeling her delicate frame beneath his strong, soldierly hands.

All Saerileth did was look up at him through her long, black eyelashes and nod. That sent Darien over the edge. He picked her up and kissed her mouth, tasting her lips as if they were fruit. She was half his size, and he easily wrapped his arms around her back, bringing his hands to her opposite sides. She threw her arms around his neck as she kissed him back with equal fervor. Her legs were wrapped around his waist, and due to their size difference, she was practically perched on his massive, muscular frame. To Darien, she was no weight at all. He had carried heavier sacks of grain.

Saerileth unwrapped her pallav from her left forearm and tossed it away. With both hands free, she ran her fingers across Darien’s close-cropped hair. Between kisses, Darien could catch glimpses of her body. Under the pallav, she wore a short shirt that left her midriff bare, and the skirt she wore, though tight, accommodated a wide range of movement. The material was elastic enough to allow her legs free reign.

Darien laid Saerileth down on the divan and lay on top of her, though he rested most of his weight on his forearms and one knee that wedged itself between the cushions. So much for the pristine state of the divan! But to Darien, this moment made his saving it worth it. He wanted to be rough with Saerileth, but this was her first time with him, so he promised himself he would be gentle. By the way she ground against him and the way she deep-kissed, Darien guessed she was skilled in sex, but he could not know whether she had ever taken a man of his size inside her before. Considering she was dressed as if she had just come from the Dimadan, he guessed she had not. The Sunjaa were better endowed than the Zenji, and Darien was better endowed than any other Sunjaa he knew. And he had seen a lot of cocks in his day.

Saerileth blindly yanked at his breeches, and he blindly yanked at the shirt that hugged her breasts. They could not stop even for a moment to look at what they were doing; he needed more of her kisses. He did not want to miss one taste. He was greedy for this beautiful, pale stranger, and her clear desire for him only served to make him abandon all reason. His growl slipped past her tongue, and she responded by sucking on his bottom lip. His cock swelled, and he was obliged to reach down and loosen the strings so that his cock might burst free. When it did, it slapped against Saerileth’s belly with such a smack that she gasped and pulled away from Darien. Her eyes searched his in wonderment, as if she had discovered hidden treasure. She gazed into his eyes as her hand found his cock. Once she touched it, she smiled at Darien, let slip a light laugh, and fell to kissing him again.

The Soldier&#039;s Lotus was a true love story between two people who were destined to be together and fought the obstacles that are thrown at them in trying to keep them apart. There was passion, deception, revenge and rivalry that will surprise you as it will pull at your heartstring. This book by Adonis Devereux had a different feel to it compared to the other books. While still set in the enchanting world of Gilalion we learn about several other tribes different from the ones in previous books and in particular Darien and Saerileth, who are so very different from each other but are destined for each other. Saerileth planned throughout her young life for revenge and when she encounters the man who was her saviour her world gets turned upside down. No matter what is thrown at Darien and Saerileth, their love and passion is so intense that they would die for each other. I enjoyed reading this book as I felt the strong emotional bond that they had for each other, at the same time was drawn to conflicts that would tear them apart. What I really loved about this story was Darien and Saerileth&#039;s passion that went beyond just the physical, but transcended to a very deep connection of two souls. I could feel that it went beyond what two people could ever hope to have in their lives and that it was one of those rare loves. Warning this book contains M/M, M/M/F, anal sex, rough sex and toys.