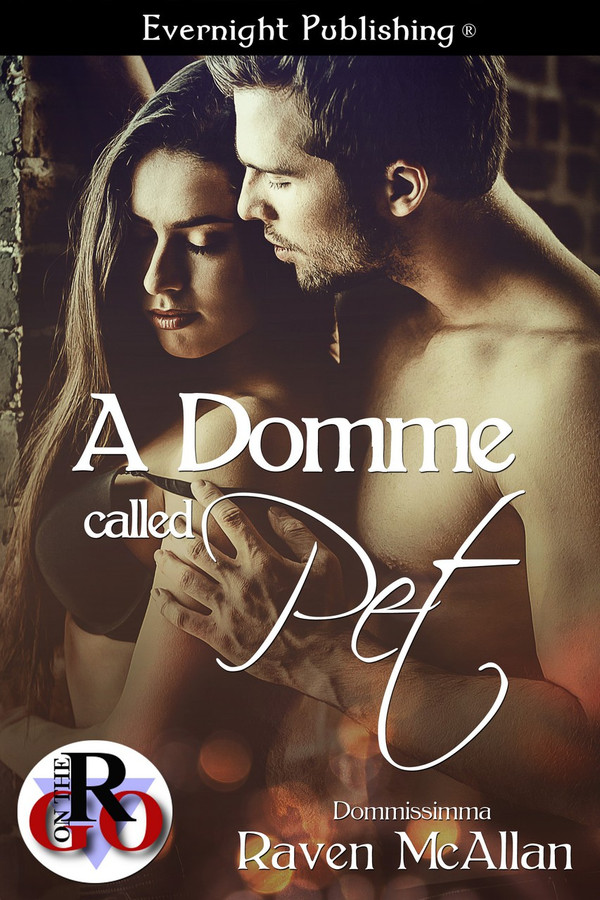 It takes a strong man to admit he needs taking care of...

No one knows that better than Domme Petula Talbot. Her sub would be the perfect man to set the record straight. However, there is the small matter of his professional reputation to consider.

Oh fuck, he’d made her cry. Mistress and sub forgotten, Dario hauled himself to his feet and tugged Tula after him, put his arms around his wife, and hugged her as if his life depended on it.

“Tula? Sweetheart? We don’t have to. I’ll do whatever you want, just tell me. You’re my world. My reason for living. You are My Lady.” To his distress that made her sob even harder. Dario was at a loss. His Lady, his Domme and he was helpless how to aid her. “I can’t make it better if you don’t tell me what’s wrong.”

“Is it because you don’t think you can flog a sub on crutches?” he asked at last. “Or the sight unnerves you? It doesn’t make me less of a man. My cock’s still in full working order.”

He had no warning before Tula punched him hard in the stomach. If she hadn’t pushed him back onto the chair he’d be flat out on the floor. Dario wheezed as pain radiated through him and his nuts threatened to crawl inside him and hide. Even his prick had deflated faster than a spent balloon and hung down between his legs in shame. Oh ho, she was mighty pissed.

That pleased him. An angry Tula usually made for some interesting scenes. This time though? He wasn’t so sure. He’d questioned her integrity, and might just have gone too far. Ah well, hopefully it would be worth it.

Tula stood over him, eyes flashing and ohh, thank the lord in all out, full on pissed Domme mode. “You, boy, need more than a flogging for that. How dare you say something so insulting? Do you think so little of our relationship that you assume I’d react like that?”

He grinned. “Nope, but it got you going didn’t it?” Dario said unrepentantly. Then he sobered. “Tula, love, My Lady, please don’t treat me as if I’m made of glass. I admit I’ve not been the best person to live with since this.” He waved toward his leg. “But not any more.”

“You can say that again. Fucking nightmare, arsy non-sub.” Tula took off her jacket, rolled the sleeves of her crisp white blouse up and un-tucked the hem from her jeans. “That’s better. Now, you were saying?” Her tone gave none of her thoughts away, not even if she expected him to be Dario or pet.

“Today? I got up, looked at it, and came in here. Our playroom, that was. With nothing to play on. No spanking bench, no floggers, no ropes or shackles. Oh, books and a desk are all very well, and I like them but not in here. I felt…” He paused as he tried to formulate the words. “Bereft, I guess. As if I’d thrown something very precious away.”

Tula put her finger under his chin and angled his head back so he could look her in the face and see the green flecks in her hazel eyes, “Not thrown away, pet. Just mislaid for a while.” She hiccupped and fished a tissue from her jeans pocket. “God almighty we don’t half pick our times, don’t we? I’ve got some news you might not be too happy about. But first.”

She smiled what Dario called her ‘wicked evil Domme in a devilish mood smile’. The one where he usually ended up with a red ass and blue balls. “I’ll show you what I think about flogging a sub on crutches. Get them, stand up, walk to the desk and bend over. Twenty to start I think, pet.” Her tone was so level she could almost be talking about how many prawns to put in a paella. It was the intent, sexy, dominant and febrile look in her eyes that gave her state of mind away. It was such a bloody turn-on Dario almost came there and then. His dick was hard, hot, and no doubt slick with pre-cum. His mouth was dry and his body tight with anticipation. He needed her tough, craved it, and without it he was only a half a person.

“Ten for dissing your Domme and ten for not telling me how you felt, when you felt it. And maybe another ten after for the sheer hell of it. To welcome you back.”

Tula laughed. “I’m not sure if this is going to be a punishment or a pleasure, but hey ho. We both desire it I think, pet. On you go while I get what we need.”

It was agony knowing she was watching him, as he struggled to his feet once more and tucked his crutches under his arms. Dario made his ungainly way across the room, and leaned over the desk. The smooth wood was cool on his heated skin. It might not be a spanking bench, but even so, his mind whirled and he understood that he was in his sub mind-set.

It was the perfect feeling, and one he’d despaired he’d ever experience again.

“Good boy.” She stroked his back, her hand soft on his skin. Stay like that. I won’t be long.”

The sting of a flat-handed slap on his ass made him jerk. The warm caress after it was not just a balm to his skin. It was, Dario decided, a benediction. A hint that all was well, and he hadn’t screwed up by being a petulant idiot.

“Shall I warm you up, pet?” Tula asked in a ‘butter wouldn’t melt in your mouth’ voice.

Dario grinned to himself. That was a double-edged question and one to which he wasn’t sure there was a correct answer. “If My Lady wishes.”

Who says that only a man can be in charge? Well in this case it’s a jerk who believes that women, and only women can submit. A man wouldn’t and couldn’t submit. Petula wishes to let others know that she’s a Domme and to show them that there is another side but her one problem with demonstrating this is that she would only use her sub. She doesn’t want to ruin his career any more than it is already, but she leaves it up to him. In this short, steamy romance we learn that love comes in many forms. There is no mold for the right way. And that you shouldn’t believe everything you hear. I love this series. I love these characters. And I love that Raven brought back (if only for a few lines) a few of our favorite characters.

OMG!! This is a very short but very sexy read!!! I total loved it. I really loved how Tula talked to the jerk and how her sub let everyone know who he was and what he did!!! Want to know what I&#039;m talking about? Get the book and find out!!! Loved, loved, loved it!!!