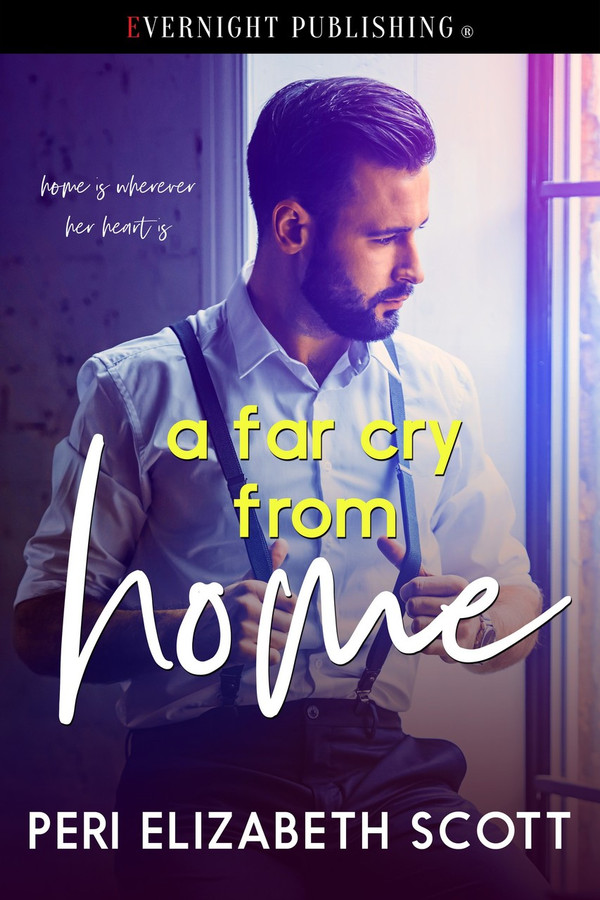 Regan Ferguson knows little beyond running The Inn. When she discovers her deceased father never repaid a loan, it's a huge blow. Now she's in debt to Maddox Ferguson, her new found, sexy cousin.

Intrigued by the woman he never knew existed, Maddox is awed by her tenacity and determination to continue running The Inn. He makes her a loan to give her the opportunity to learn for herself how impossible the task. However, he quietly lines up potential buyers as a fallback plan.

Regan eventually has that epiphany, only to accidentally discover Maddox’s plan. Feeling betrayed and confused, she secretly signs the buyout and hits the road with her cat.

Maddox follows, but can they find their happily ever after?

She stuck out her hand, and he fancied she saw it as an olive branch. The hostility she’d initially projected was gone, and he took the opportunity to encroach into her space. Clasping her small, work-roughened hand in his much larger one, a frisson of energy sparked between them and he felt her quiver.

Fascinated, he watched as she strove to regain her composure, while he allowed his desire to show. Staring into her eyes, the pale-blue of her irises consumed by the dilation of her pupils, he read her need. He tugged her to his chest, the clean smell of soap and water, and something uniquely Regan, wafting from her.

Her head tipped back and he dropped his mouth down on hers, the immediate connection hardening his flesh to the point of pain. She relaxed into his hold and he tasted her with desperate intent. His fingers wove through the silky mass of her hair, holding her steady, and she moaned deep in her throat. She pressed closer, her arms wreathing around his neck.

He somehow brought it to a close, over long before he wanted it to be, but his conscience pricked hard. He’d promised her the time and money to bring The Inn up to snuff, somehow unable to resist. And now he’d honor his commitment, intuiting the importance of this woman determining her own destiny. Not a fling, not like with his other women.

His libido jeered and prodded at him but knew to allow nature to take its course. Wherever this connection with Regan was going, he wouldn’t hurry nor derail it.

As they both caught their breath, he gently set her away from him, his hands on her lithe waist, until she steadied on her stool. “I normally don’t seal business deals with a kiss,” he said, aware his tone held a certain rasp. Clearing his throat, he continued, “It’s been a … momentous day.”

Her slender throat working in a swallow, she said, “I’ve never sealed a business deal before.”

He knew she wasn’t experienced and doubted she kissed every man she’d just met with fervor and without meaning anything by it. Aching for her, he clamped down on his physical need and did his best to appear suave and unruffled. “We have a deal, Regan. I’ll bring my things in and get settled while you get organized. You’ll need a material list, among other things.”

Visibly drawing her composure around her like flexible armor, she slipped from the stool and turned her back on him, clearing away the dishes on the island. “Sounds good. I’ll just tidy up and then sit down with pen and paper. Lists are good.”

Holding hard on to his own equanimity, he nodded and headed out for his car. Some fresh air would clear his head and cool him down.

Regan’s father passes away and she’s left shouldering the inn by herself or so she thinks. An unknown cousin, Maddox, comes along with money and a gorgeous face but her trust in him fails. Will she give him a second chance? So they’re cousins but not true cousins which makes the taboo less risky and the romance more enjoyable. I like Regan. She does what she has to do and if she doesn’t know, she’ll figured it out. She is the plumbing, the electrician, the maid, the cook, everything. Maddox doesn’t know a thing about manual labor but he is totally smitten with Regan. Then she finds out he’s selling the inn behind her back. It seems like a very believable detail in the story that gives the characters some conflict. The romance is sweet. I really like the connection growing between Regan and Maddox. ​If you like contemporary romance A Far Cry From Home is sure to make you smile and swoon!