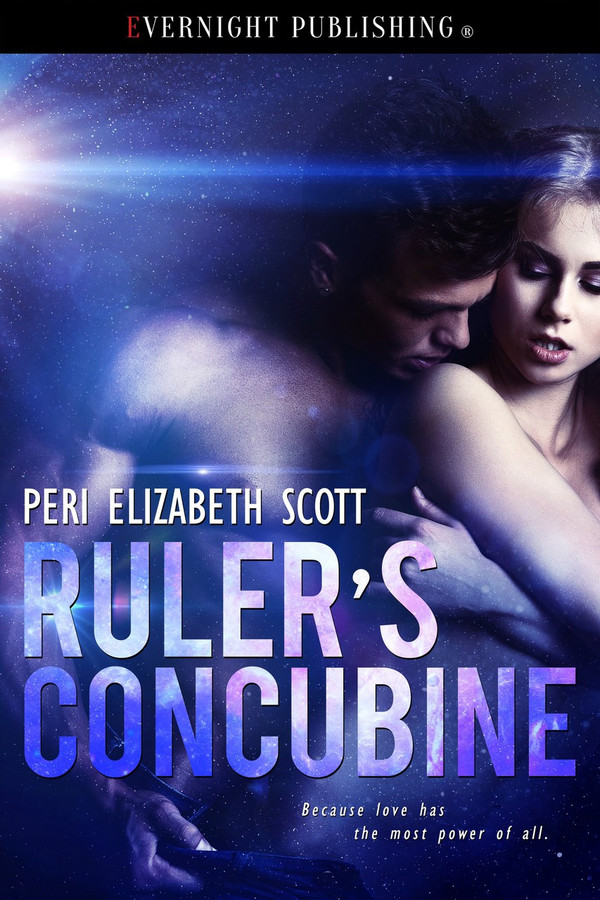 Meridia is headed for extinction, unless a compatible species can be found. The backward planet, Earth, the one the Meridians stripped of technology now holds the only promising species in the Galaxy. As Ruler, Lysett Daboort will do his duty and choose a royal concubine from those women ‘liberated’ from Earth, but that is all it will be—until he meets Celeste Raynor.

Celeste is barely subsisting on Earth and isn’t enamored with becoming one of Meridia’s concubines, despite the esteem afforded their females. But there is nothing left for her at home and she isn’t averse to having a child to love, not to mention a caring, supportive partner. Until she meets the Ruler himself.

The Ruler resists Celeste’s appeal and she refuses his arrogant approach, yet they must somehow come to terms. Lysett rules supreme, or does he? Because love has the most power of all.

Squaring her shoulders, Celeste traversed the last few yards and trod up the grade to the road, squinting ahead to see if she could sight the town of Belford. And stumbled to a dead halt, the dust around her boots eddying out in the sudden silence. Not that it was actually quiet. Her footsteps no longer sounded, but countless others seemed to reverberate in the distance, and there was no mistaking the muffled feminine protests and deeper, more masculine shouts. Her heart began to beat again, pounding in her temples as the blood surged throughout her veins, and she stole one, then two, cautious backward steps, trying to take in enough oxygen to make her lungs work.

In her shock and fear, she forgot about the steepness of the grade, and her left foot scrabbled for purchase, seemingly independent of the rest of her body before it turned under her weight. With a stifled cry, she toppled sideways and rolled down the slight hill, each and every stone and protruding root imprinting on her skin, wherever the fabric of her clothing was vulnerable. Her little packet of food skittered away in her peripheral line of vision, the ends of the tied-off cloth fluttering as if in farewell.

Coming to rest at the bottom, she lay, disheveled, and paralyzed with fright. Holy hell. She hadn’t seen a lot of them, and she’d been really young, but the memory of those vids of Meridian ships wasn’t something that faded with time. Spaceships were supposed to look like saucers, or maybe like the Earth rockets, and not such a graceful, yet menacing, mode of travel. And the figures surrounding the ship were obviously taller than most men on her planet, despite the distance from her present position and them. Her mind had cataloged the entire scene in that moment before her retreat and wrestled with the fact there were other humans amongst the aliens, struggling as they were escorted, or dragged, toward the spaceship. Female forms, primarily.

Celeste stared up at the autumn sky, such a bright blue, with wispy mare-tails of clouds, an impossibly clear view of normalcy, when one considered what was going on just down the road. Her heart continued to pound within the confines of her chest, although her breathing was more within the normal range, and she carefully moved all her extremities, wincing at the pain in her ankle. She eased to one side, pulling her knees up, then rolled onto all fours. Unwilling to risk standing on what might be a sprain, not to mention anyone—any alien—seeing her head pop up alongside the road, she began to crawl for the shelter of the trees. This was fast becoming an unfortunate turn of events, and she didn’t care for it at all.

She didn’t hear him coming, not over the crackling of leaves beneath her hands and knees, nor over the pounding in her temples, but surely someone of that size couldn’t have moved so quietly. One minute the line of trees beckoned, the next they were blocked by a pair of enormous black boots and heavily armored legs, a type of long weapon pointed down beside the right knee. Scrambling ignominiously sideways, she risked a shove to her feet, the abused ankle protesting mightily as she did so, but her attempt at flight was for naught. A big gloved hand caught her bicep and hauled her against a wide, solid chest, her face smacking into some kind of belt across his shoulder. She cried out as her ankle absorbed the additional pressure and her cheek met the unforgiving armor. The alien stilled.

“My apologies, female. Where are you injured?” It was a deep voice, speaking in halting English, and she could feel it resonating from his chest, his breath feathering across the top of her head.

She couldn’t respond, too busy trying to manage the loosening of her bladder. She wished she remembered how to pray.

The story was very original and unique - I found myself loving both the main characters, and could really feel all of the emotions, even the sad ones that made me want to cry, but that just made me more invested in their story. There were some parts here and there where I felt like the inner thoughts of Celeste dragged on a bit, and I found myself skimming over them because a lot of time, they became a bit repetitive, but all in all, the story held really well together. There was a threat lingering over their relationship problems, which made the stakes higher, and I loved the &#039;twist&#039; of sorts at the end. My favorite character turned out to be Bast, but I did really love Celeste and Lysett. Good plot, unique story, memorable characters!

I don&#039;t even know where to start with this review, the book was amazing for me. I was gifted a copy of the book and I am so glad I took the chance and read it, I stayed up all night because it was just one of those books you couldn&#039;t put down. It had me in tears with how much emotion I felt from the characters. I don&#039;t read many, if any, future placed genre books, and this one takes place after 2084 and Earth has all but destroyed itself. The aliens on the ruling planet of Meridia are in need of heirs and the matches on their planet have not been successful, you need to read why its a huge part of the plot. But they find that Earth woman will be compatible and have offered up for woman to come and be concubines on their planet for a better way of life than they have. All concubines are in agreement with their contracts and matches, this is all consensual. Lysett the Ruler of Meridia, my heart was broken for him and all that he has gone through, but there were times I wanted to smack him for his boorish attitude and his miscommunication. Celeste, she is from Earth and has lost all she knows and is struggling when she is kidnapped to be taken to another planet. She agrees to be a concubine and is chosen by the Ruler of the planet. I cried for Celeste when she was unhappy and lonely, I cried when she thought she was not worthy and felt unloved, I cried when she found her love. There are some twist and plot turns in the book that you keep you hooked into seeing what is going to happen in the end. This is must read book if you are looking for a great HEA and to feel some powerful emotions while reading. Great job Peri Elizabeth Scott!