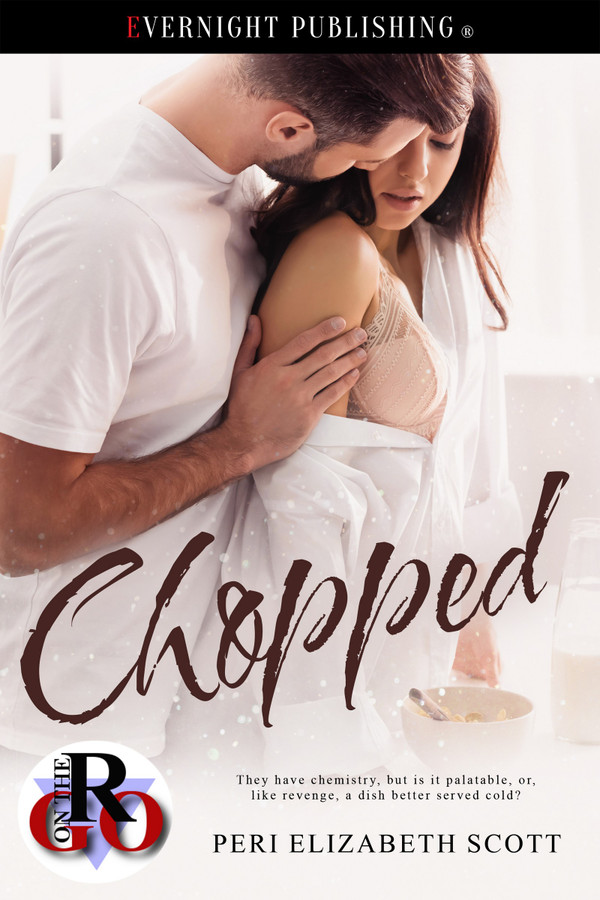 Regan Braxton is a prep cook at The Salt Cellar, an up-and-coming restaurant in Las Vegas. She has aspirations to make line cook and actually thought it was a done deal—before Chef Malachi Abrams took over the kitchen.

He’s gorgeous, arrogant, and infuriating and seems to take a singular interest in criticizing her—with scant approval and encouragement. Regan has a second job that she loves equally, working as a flash dancer in a nearby club, but she needs both incomes. So she won’t let him chop her.

Chef Malachi is determined to make The Salt Cellar Vegas’s best restaurant. All is going according to plan despite the attitude of his feisty prep cook. He might be inexplicitly drawn to her, but that won’t get in the way of his work ethic. They have chemistry, but is it palatable, or, like revenge, a dish better served cold?

I was wondering about the line cook position. Uh, Mort—”

“I filled it. Jocelyn Sanderson starts tomorrow.” He cut me off and shut me down before I begged, so that was one good thing.

Reminding myself I’d expected—not that, but a rejection, I managed a nod, swallowing my disappointment. “Right. Okay.” I edged in the direction of the cooler.

He said, “Mort left nothing for me to reference, Regan. In regard to anything.”

I knew Mort had left under a cloud. No one seemed to know what, though speculation ran rampant, and it wasn’t my place to harass the man. I’d called to see if he was okay because he was a friend of Gramps and he had finagled this job for me. But he made it clear not to bother, another acquaintance lost. “I see.”

“And you’re not ready for line cook. You lack pacing. And the education.”

Whoa. He must have studied under the Ramsay school of humiliation and graduated with honors. I wanted to tell him to prove the pacing issue because I couldn’t dispute the education piece. That was what happened when your last relative died and had borrowed against his life insurance to pay for your schooling. I’d lost the house and pretty much everything with under a year left to go once I covered Gramps’s medical bills. Never mind how long it took me to crawl out from under the grief.

Boo hoo. Self-pity got a person nowhere, and there were plenty of people worse off. I tugged up my big girl panties and accepted the great Chef Malachi Abram’s edict. But I wasn’t doing this anymore. “You know best. Do you want two weeks’ notice or want me gone now?” Without your finely grated freaking parsnips. See, I could be couth under pressure.

His face tightened, and he glared. He even looked handsome when pissed. “Can’t take constructive criticism?”

“Depends on who’s offering it. Chef. And if it’s accurate and not based on … something else.”

Looming over me, he leaned in, all musk and male. “That attitude won’t endear you to any executive chef in the business.”

“Or maybe just not to you.” I was vibrating, outraged. Because I had scored high on my ability to work well with others and there had been numerous opportunities and also chefs reputed to be difficult with no complaints. Peter was the prima donna understudy here, and we muddled through despite his wandering hands.

If the size thirteen shoe fits…

I kept my stare on his, not willing to give in first. Tension deepened and stretched between us, thick as caramel.

Wonder of wonders, he took a deep breath and straightened. “Two weeks. And you ditch that ridiculous smock and wear what’s provided. Leave your knives at home.”

Because I couldn’t leave well enough alone or let him win, I retorted, “I’ll be further off the pace without them.”

His nostrils flared, and color streaked his high cheekbones, and for a moment, I debated making a break for it—or doing something else. Something way out of line. But he inclined his head with a jerk, then turned on his heel and stalked off.