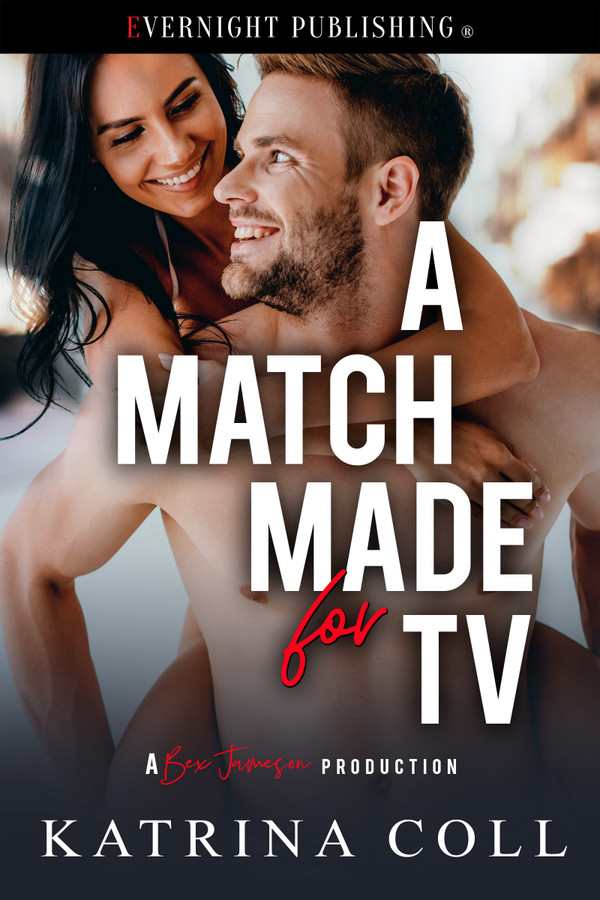 Ria DeLorenzo is a damn good doctor. Or was. Burnt out before she’s begun, a three-month paid vacation as the medical consultant to a reality TV show is just what she needs to recover her mojo.

Cancer survivor and headline grabber Griffin Stromberg is desperate to reboot his ultra-macho image. Typecast by years of fame, showcasing his softer side with a picture-perfect relationship should do the trick. Until Ria breaches show protocol and gets Griff's fake girlfriend disqualified.
Now Ria's only hope of clocking out of reality is to check in to a fantasy by becoming his new partner. Griff, however, wants their relationship to be the real deal, not one of his infamous life-hacks.

Can a man renowned for taking shortcuts prove he's ready to commit to a forever relationship? Or will reality bite once filming is over?

Is that your issue? That you’ll drop character and reveal the real Ria? Five yards apart. Three months together. I’m going to see you. All of you. And you’re going to get all of me because, let’s not forget, I’m entirely and exclusively yours while we’re banded. You could consider this a trial run at a relationship.” I sure as hell am.

And if it didn’t work, they could both blame Bex.

Ria eyed him balefully. “Now that’s a mighty interesting spin to our situation. Gets me to thinking about why you might’ve signed onto this show with someone you knew for years but didn’t date.”

He raised an eyebrow. “Come to any conclusions?”

“Obviously you could both cite enough intimate facts about each other to fake being an actual couple.”

“Sounds like cheating, right? But Bex never specified a couple’s relationship had to be romantic. Hell, I could have invited one of my sisters if they weren’t all knee deep in babies. Heather was the next best choice. Until I met you. Until we kissed. Now that you’ve signed on, I don’t intend to fake anything.”

A tiny V appeared between her brows. “Are you saying you want a romantic relationship?”

“I think we have potential. And you can’t deny there’s chemistry.”

Panic spread across her face. “That’s purely physical. Don’t get me wrong, I agreed to your condition and I’m willing to act on it. But here’s my condition in return. When we wrap, we’re over.”

“Is that what you signed on for? A fling?”

“I surely did. You’re totally above my paygrade, so I’m cashing in while I can.” She smiled, bright and false. “I’m sure you can appreciate that, given you’re an opportunist.”

He wanted to call her bullshit. Anyone willing to bank on a fantasy hook-up lasting three months wouldn’t drop it by a deadline. But, like her bottle trick, the best approach was to play along.

“Opportunist has so many negative connotations,” he mused, leaning forward to take the wine bottle from her and place it on the floor beside the bed. “Unfair when it takes skill and timing to finesse obstacles into opportunities.”

Her gaze skittered from him to the bottle as if wishing she’d drunk as much as she seemed to. Or perhaps she regretted declaring herself willing. Too bad. He’d never seduced someone before. Never needed to. But the doctor could do with a dose of her own medicine.

Collecting her unresisting hand, he ran his thumb along the fine bones. Such a delicate hand, so tiny in his own, yet she probably had more skill in her fingertips than he had in his whole body. A reminder he couldn’t let that quip about paygrades slide.

“Don’t ever disparage yourself on my behalf. My ego is big enough without being stroked.”

“Then you’ll only make it bigger.” His cock twitched, interpreting the message from his ears as an instruction, unaware it was destined for disappointment.

Ria failed to serve up a rejoinder. Instead the little crease between her brow returned as she stared at their hands. Most doctors he’d known had been confident to the point of arrogance, but her sass seemed a reflex action.

He studied her face. Whoever had done her makeup had concealed her freckles as if they were a flaw. But he liked the emphasis on her eyes. As if sensing his scrutiny, her gaze flicked to his. A strange, cramping sensation squeezed his ribs. Sad eyes. Sad, confused, and a little lost. She stilled under his scrutiny. Didn’t so much as blink. But the black of her pupils widened until they seemed to spill into the brown.

“You are one seriously smart, sexy woman,” he found himself saying.

“Smart and sexy?” She sounded doubtful.

Her mouth pursed and he couldn’t help himself. He traced the bow of her upper lip with his index finger. “That color—whatever it is—looks very, very edible.”

“Yeah, like the fruit.” He dipped the tip of his finger inside her bottom lip and dragged the soft flesh down. “Plump. Juicy. Delicious.”

The heat of her breath washed over his knuckles as she gasped.

“Your mouth, Ria… Your mouth drives me insane.”

Circling and caressing, he mapped the shape of her mouth again and again. He wanted to claim it with his own, wanted it wringing out his name as he brought her to climax, wanted it wrapped around his cock.

Her breathing shallowed and grew ragged.

It matched his own.

She leaned in and her tongue darted out in a snatching quest for his thumb. He almost let her catch him. Almost forgot his intention to take the long, slow route to real intimacy and not the shortcut through short-lived passion. If she sucked on his finger, however, those images in his head were going to get real. And fast. Reluctantly, he tucked it aside and spread his hand to cup her cheek. The entire weight of her body seemed to rest in his palm. Goddammit, he couldn’t do this just to fake her out.

“You stopped.” She sounded drugged.

Carefully, slowly, he withdrew his hand and put distance between them. “Like I said, I’ll kiss you again when I’m sure you can look me in the eyes afterward.”

I’m not a reality TV watcher, but this romance set on a cross between American Ninja Warrior and Love Island pulled me right in. The instant attraction, the sexual tension, the buildup to the finale, all of it worked for me. I could not put it down. I can’t wait for Katrina Coll’s next novel!

Really really enjoyed the twists and original ideas in this book. One of the few books that had me thinking of some of the ideas. Well done

Made to Love You by Kendra Mei Chailyn