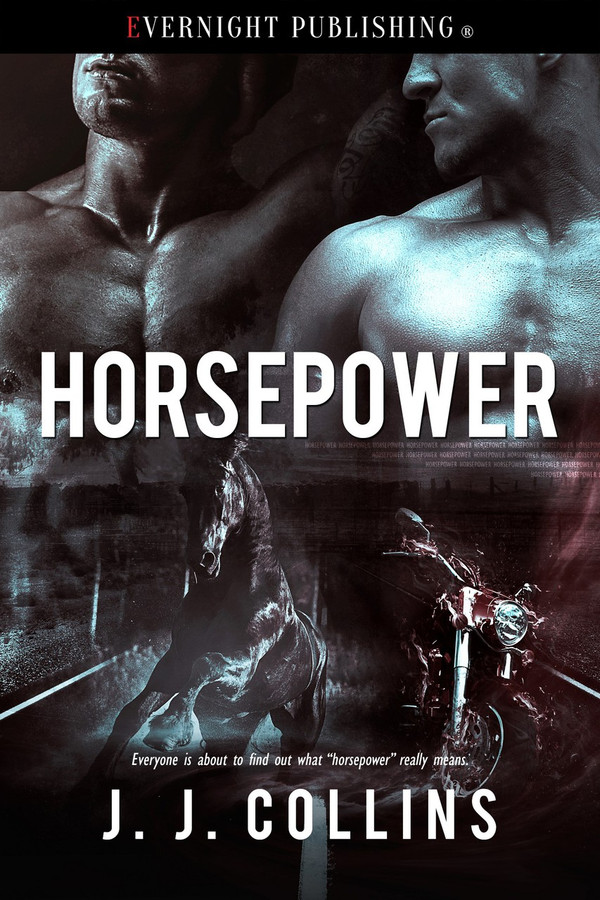 Everyone is about to find out what "horsepower" really means...

Roy Tennison builds custom motorcycles, and lives with buried guilt. He couldn’t save his best friend’s life, and now the man’s uncle, not to mention the entire town, resents him. If they ever learn he’s gay, Roy’s life won’t be worth a busted tailpipe.

Then Dale Evanista walks into his garage, looking for a bike. Roy offers him a job instead. Besides being a cycle enthusiast, Dale’s a horse-shifter, also ostracized by the town. Man and horse-man come together over a mutual love of bikes that grows into a love for each other. And when the bigoted old man finds out, emotions good and bad are running high, and events rush toward a showdown.

He shoved the covers back and carefully swung his legs off the bed. His left wasn’t ready for weight yet, but the right worked well enough. If he used the nightstand for balance he could get up. How long he could stay that way was anybody’s guess.

Dale sprang off the chair. “Whoa! You shouldn’t be up.”

“Gotta check on my bike.” He swayed and caught himself with a hand against the wall. Dale darted forward. Roy waved him off. His gaze dropped—unplanned, mind—to the other’s crotch. His naked crotch.

Jesus in a bucket. Was all of that him? Talk about hung like a horse…

Roy quickly looked at the floor. “You want to cover that up?”

“What? Healthy dicks get you nervous? Some faggot you are.”

“Humor me, okay? I’m an injured man. Don’t go teasing me with something I can’t do anything about.”

“Wuss,” Dale said, but he grabbed a shirt—Roy’s own shirt, he noted, with sweat and dirt smears on it—and wrapped it around his middle. Roy pretended not to watch, but he was watching anyway. That was one fine chunk of horseflesh, plenty for a fellah to wrap his hands or mouth around. Then it was gone behind the shirt, and Roy’s half-hearted responsive hard-on sank back down again.

But as soon as all that throbbing moved out of his ankle and back up to where it belonged … yeah, who could say?

The rest of Dale’s body might be slimmer than Roy’s, but it looked like it was all rock-solid muscle, especially in those mile-long legs. Roy kind of wished he’d turn around. Bet that ass was killer. Hell of a thing to be thinking about after a brush with disaster. Roy figured the shock must not have worn off yet.

“Didn’t you bring any clothes with you?” he asked.

“And keep ’em where? It ain’t like a horse comes with pockets.”

“No, sir.” Roy grinned. This time he stared with open admiration at the tent pole lifting his shirt’s fabric away from Dale’s nethers. Reach for the sky, pardner. “You do not. At all.”

His Super Neighbor by J.J. Collins