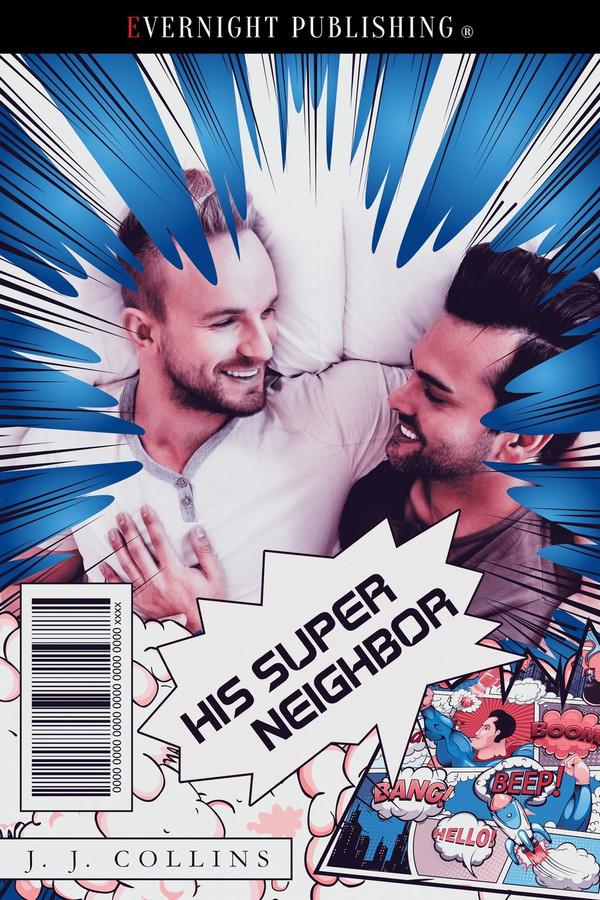 Cullen Braithwaite has two obsessions—a massive crush on Grant Guthrie, his handsome neighbor across the street, and drawing comic books. Grant has one obsession—protecting his ten-year-old nephew from his sister’s abusive ex. The two meet and romance blossoms. Then Cullen draws Grant into a comic book story, publicly exposing him to a dangerous stalker. With real-life evil closing in, one of them will have to learn to unleash his inner hero.

The moment they stepped into the bedroom, Grant got hit with the double whammy of racing heart and racing brain. He wanted a clear head for this. He didn’t want Cullen thinking he considered him a casual fuck. The time had come to kick this single life shit to the curb and settle down with the right man. After that fanfuckingtastic blowjob, he’d been ready to propose right then and there, but what little remained of his rational brain urged caution. He didn’t want to move too fast or too recklessly, and maybe send Cullen screaming back across the street.

Then he looked down into Cullen’s eyes and all his fears disappeared. Their blue had darkened to a navy ring around his enormous pupils. And that voice he’d used in the living room, deep and dark and hoarse with passion—no, his man wasn’t going anywhere.

He had his shirt off and draped over a chair in the corner before he noticed Cullen still hovered in the doorway. Dammit. Grant didn’t want to lose the momentum they’d started in the other room. He’d better make a move before his dream date’s feet got any colder.

He returned to the doorway and slid his arms around Cullen’s waist. His lips blazed a nibbling trail down Cullen’s throat to his shirt collar. Seeing—and feeling—the effect his bare chest was having on the smaller man, Grant deliberately rubbed up against him. His fly was still open. To his surprise his cock was already showing signs of randy life again, in spite of its recent exertions. Perhaps it sensed Cullen’s, twitching behind the thin barrier of his slacks. Great heads thinking alike.

“I thought we were doing this,” he murmured against Cullen’s throat.

Cullen peered beyond his shoulder. “Your room. It’s … clean.”

“Yeah, I’m the neatnik in the family. Marti takes a more I’ll-get-to-it-when-I-get-to-it approach. Helps when you have a kid.”

“I’m not complaining,” Cullen said quickly. “I was expecting, I don’t know, a den of iniquity or something.”

“Seriously? My ten-year-old nephew stays here. Iniquity got kicked to the curb a while ago. On the other hand…” That spot just behind Cullen’s ear looked incredibly tempting. He leaned in to lick at it, and heard Cullen’s breath catch. “Rudy isn’t staying here tonight. I’d say some iniquity’s in order.”

“What are you still doing in your clothes?” he said roughly.

Cullen’s eyes were practically all pupil by now, and his voice had dropped into a Darth Vader register. “Waiting for you to take them off.”

Foreplay over. Let the games begin.