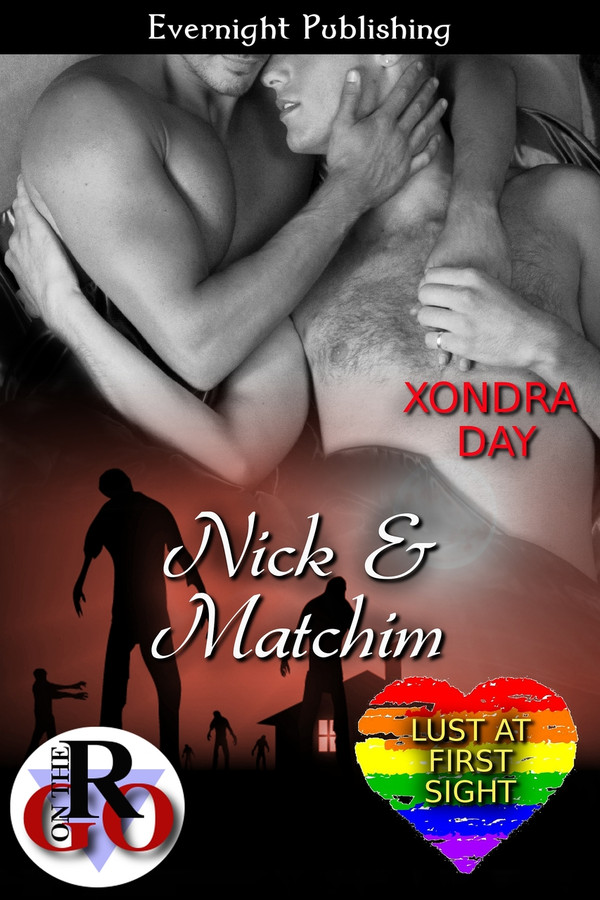 Stuck in a world full of cannibalistic corpses after a mysterious flu-like virus kills off the majority of the world's population, Nick Sparrow has learned to survive in a world where the dead outnumber the living.

Matchim Chase has been surviving on his own for the past couple of weeks. When he's suddenly surrounded by a horde of zombies, he's thankful to have a handsome stranger come to his rescue.

Holed up together in a motel room and subsequently in an abandoned house, the connection they form is instant. They find what they need in each other. In a world torn apart they come together sharing their pasts and hopes for the future. Living in the moment is all they have because tomorrow might never come.

Nick listened to the sound of water running in the other room. The door was left ajar, and that had gone unnoticed to his prying eyes. He moved to the door and stood outside with his head down. He desperately wanted to go in there, but the guy most likely wasn’t gay or even bisexual. He must have lost his mind to be even thinking about such things. The world was nearing its end, and all he had was sex on the brain. The last time he’d had sex…well it was quite some time ago before all this shit came along. Still, he craved to be touched, and to have someone touch him. “Hey, I need to take a leak,” he said. He did need to go, that wasn’t a lie, but he could have easily waited until Matchim was done in there.

“Sure, come on in. I’m almost finished.”

Nick stepped into the steamy bathroom and through the clear shower curtain he spied the perfect male form. He stopped for a moment and forgot what he was actually supposed to do, and when Matchim pulled the curtain to one side, he turned away quickly. “Sorry,” he muttered, lifting the toilet’s lid and feeling more than a little embarrassed.

“Sorry for what, looking?” Matchim raised one brow, and flashed him an amused grin.

“I wasn’t,” he replied, but the way his jeans bulged in the crotch told on him. So much for maintaining control. “It’s been a while since I’ve been around anyone—living, that is.”

Matchim turned off the water as he stepped out of the shower. “I understand how you feel. I admit that my heart leapt just a little when I heard your voice call out to me. I was starting to think that I was the only one left alive out there among the dead.” He wrapped a towel around his waist, and dried his hair with another. “I’ll leave you to it,” he said, motioning to the toilet. “I can’t pee with anyone in the room.”

“What was that?” Matchim asked.

Outside, the noise coming from the dead had lessened, and while it was obvious some of them still lingered outside, Nick had been right. Most of them had moved on.

Matchim dug through his backpack for his one other change of clothes. It wasn’t exactly clean, but it was far better than what he had taken off and tossed on the bathroom floor. It was a glorious feeling to feel free of dirt and grime again.

Nick, like everyone, must have had a story. Matchim was curious to know more about the man and what had led him to this place. He was extremely easy on the eyes, and in a way Nick reminded Matchim of Brian. It was the way he carried himself mostly, along with the soft way he spoke.