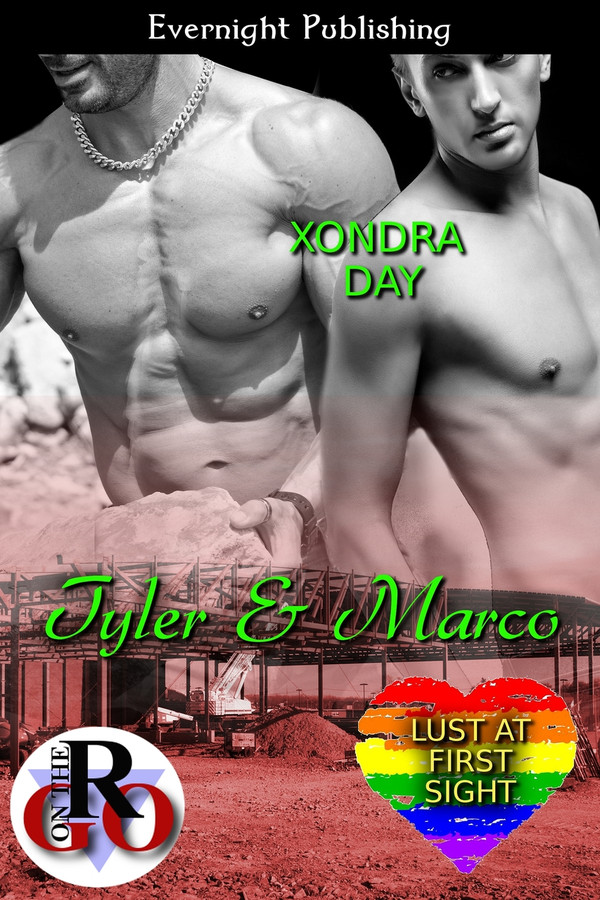 First time meetings can lead to many things, but when you meet the one guy you're automatically attracted to—the chemistry sizzles. Strangers or not, it doesn't matter. It's lust at first sight and anything's game...

Shy and socially awkward Tyler has been watching the construction site across from his house secretly lusting for the hot guys that work there, but when he finally comes face to face with the hot and sexy Italian, Marco, it's lust at first sight! Marco is everything Tyler has ever dreamed of in a man, and his complete opposite in every way possible.

Marco's life is all about hard work. From the moment he left home just after high school, he'd forged his own way in the world without ever knowing real love. But when he meets the cute guy who lives across the street from his work, he instantly feels something sizzling between them. But Marco isn't out and not sure if he's ready to tell the world he's gay, or even his own family.

Both guys yearn for something more in life and after a couple rounds of hot sex, and another chance meeting, they come to see that possibly there is something more between them than just lust.

Tyler entered Marco’s apartment after he unlocked the door and stepped aside. He was wowed by what he saw next. The apartment was actually a loft style studio. The open space set out before him gave him a sense of freedom. “This is gorgeous,” he commented, looking around. The stark brick walls, along with modern furnishings, were refreshing and crisp. “Who did the decorating?” Tyler couldn’t resist asking.

Marco shrugged. “I did. I picked out things that I liked, and it all kind of went together quite easily.”

Tyler was thoroughly impressed. There was more to Marco than he’d initially thought. “I’m impressed.”

“If this impresses you, then wait until I show you my bed,” Marco mused. He waggled his brows, and a small half grin that was incredibly sexy crossed his lips. Tyler thought back to their kiss. He wanted that again … now.

Tyler was one of few guys that had gotten inside Marco’s apartment. Between his lack of experience dating or anything otherwise, he didn’t have many guests enter his domain. He led Tyler to the kitchen area where he retrieved two beers from the fridge. “It’s the best I can do,” he said, handing the frosted bottle to his guest. “I’m not much for wine or anything else.”

“Beer’s fine.” Tyler untwisted the cap. Their eyes met, and Marco felt relaxed in his new friend’s presence. He hoped that Tyler felt the same. He watched as Tyler took a sip of beer before he started to advance upon him. He placed his own unopened bottle back on the counter top first. They found their way to Marco’s bed across the room, and together they toppled back on the firm yet slightly soft mattress. “You’re so sexy,” Tyler said. Their eyes locked as Marco brought his hand to his soon to be lover’s cheek.

“Sexy? I won’t complain getting a compliment like that from a cutie like you.” Marco leaned his head down a little until his lips connected with Tyler’s. The chemistry between them felt sensational as did their tongues merging together in a heated passion that Marco hadn’t experienced before.

He pressed his body into Tyler. He wanted so much more. His fingers found their way down to the hem of Tyler’s shirt, and slowly he pulled up on it. “This needs to go,” he murmured against Tyler’s lips. “I want to see you,” he paused. “All of you.”

From the first moment he’d spotted this man working on the construction site, Tyler had wanted him. But guys like Marco rarely ever went for guys like him, right? If this was a dream, he sure as hell didn’t want to wake up anytime soon since they were eagerly getting to what would be the good parts. With Marco’s strong hands practically tearing off his clothes, he felt like he was about to burst from pure lust at any second. But what he really wanted was to see this hot specimen of man naked.

Marco at some point managed to get his own shirt off, and Tyler was left nearly breathless. This man was completely and utterly perfect. Tyler ran his hands up and down Marco’s chest feeling the ripple of muscle underneath his fingers. The air around them had become thick and heady. And when Marco moved lower and then lower again, Tyler nearly gasped when he felt Marco gripping his hard cock, jacking it slowly and seductively. “Get out of those jeans,” Marco demanded, helping Tyler pull them down with his free hand. “The undies are cute, but they gotta go, too. I want nothing between my mouth and your cock.”

A sexy, sweet short with two wonderful male leads. Tyler is a bit shy, a bit of a loner and spends most of his days ogling the men on the construction site across from his apartment. One man in particular draws his eye--a tall man with firm muscles that Tyler drools over more than once. Tyler is short and doesn&#039;t spend half his time at the gym so he thinks no one would be interested in him. Most people have called him &#039;cute&#039;, but &#039;cute&#039; doesn&#039;t help him get a man. And he wants more than just one-night stands. Marco, the builder, is a hard worker and most of the time that&#039;s all he does. He has little time for evenings out and meeting someone special, even though that&#039;s what he wants. He decides one evening to go out and forget about work even if it&#039;s just for one night. Tyler is dragged out by his friends that same evening and bumps into Marco, the man he&#039;d been ogling from across the street. This was a wonderful, sweet story and I loved both Marco and Tyler. Both of them are a bit insecure in their own way: Tyler because of his innate shyness and Marco because he is semi-closeted. He comes from an old-fashioned Italian family who consider being gay a sin and Marco doesn&#039;t know how to tell them. Although short, it is a full, well-rounded story. The characterisation isn&#039;t skimped on and you do get to know Tyler and Marco a bit; it&#039;s not just a story about two male bodies. This is a story about Marco and Tyler. There was a bit of angst about Marco coming out to his family, but overall, it&#039;s a sweet read. The love scene was hot and sensual, although I did find it a bit strange that they made love that first night they met &#039;officially&#039; as it were. Both of them however are keen for this to be more than a one-night stand, and by the end of the story you hope it will work out for both of them. I think it will, as they seem suited to each other. A very enjoyable tale.