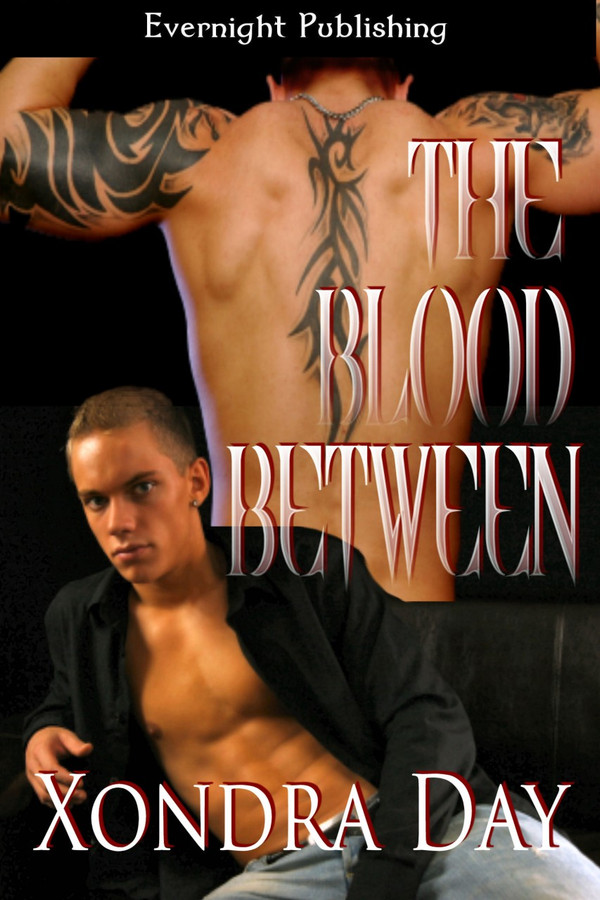 New to the big city, Kyle is having a hard time fitting in. He has a job, and a roof over his head, but something is missing. One night, after an experience he'd rather leave forgotten, he meets a mysterious man named Luca. Kyle doesn't know it, but they've met before. Soon after, Kyle is thrown headlong into a world of darkness, death, and a secret Luca is struggling to keep.

Will Luca reveal what draws him to Kyle, and more importantly, will Kyle believe him?

“How much have you told him?” demanded Jordon, his voice rising with anger.

Luca bolted back to reality, his thoughts returning to the present.

“You risk not only our existence but his life. It’s just a matter of time before they come here, come for you both,” explained Jordon.

“Everything,” replied Luca. “He knows everything.” With Kyle in the next room, he kept his voice low.

“You knew the rules and you broke them anyway.” Jordon shook his head in disgust.

“Damn the rules!” Luca felt anger rise inside him. “If I’d wanted to live with rules forced upon me by others, I would have stayed human. Who are they to tell us how we should conduct ourselves? You speak of them as if they’re gods. Well, are they?”

“In a manner of speaking, yes. Without them and their rules, rules which you adamantly despise, anarchy would reign. There are many out there who aren’t as civilized as you and I. You need to understand this. They would out us along with themselves just for the fame and attention it would bring.”

There was truth in Jordon’s words. Luca couldn’t deny that.

“I will never allow them to harm him.”

“And how do you expect to prevent it? They’re stronger than any of us, and no one would willingly go up against them. To do so would mean certain destruction. In case you haven’t realized it yet, even the undead can die.”

“Why are you so adamant about protecting this…human? What hold does he have over you? He’s nothing.”

Luca resisted telling Jordon the truth. That they had both known Kyle before.

“Take him away from here,” ordered Jordon, throwing both hands in the air. “I don’t want him under this roof. I refuse to support this.”

Kyle sat on the edge of the bed watching him.

“Is everything okay?” he asked. His voice held concern.

“We’ll talk about it later. I’m going to put you in a cab, and I want you to stay put for a couple days. You still need to rest.”

“Something is wrong. I can tell. Is it because of me?”

Weakness sluiced through Luca. He needed to feed. With dawn only hours away he had to make haste.

“I inadvertently put you at risk. It’s not safe for you to be here. I’ll come to you tomorrow night to check on you.”

“I’m trying my best to understand. You’ve told me some crazy things. I know it’s the truth, I feel that, and I see it in your eyes. If I’m in danger, I deserve to know everything.”

“I broke rules that, once broken, cannot be undone. I wasn’t thinking straight. I wanted to save you, and the only way I could do that was through my blood.

“Now you must go. I have things to tend to.”

Often Luca planned his hunts weeks in advance. He would stalk his chosen victims, watch them from afar to get a sense of who they were and how they operated.

For the later part of the night, he found himself outside a trailer park which skirted the city. The divide between the rich and the poor was more pronounced here than any other area.

Inside number twenty-two Ms. Miranda Lewis had drunk herself into a stupor once again. She lay in a pool of her own vomit while Bradley, age six months, lay crying in his crib, hungry and frightened.

Some people could be saved, but she wasn’t one of them. Chances were, little Bradley would grown up to fall into place, in the same circle unless he found a way to break the vicious cycle.

The door was unlocked, Luca wasn’t surprised. The first thing that hit was the stink of vomit and other unsavory things. He winced as he looked around at the mess surrounding him.

First he went to Bradley. “Hush,” he said, soothing him, before placing him back down in the crib.

Off to the side, the so-called mother lay sprawled on the pull-out bed. For someone barely thirty, she didn’t look so good.

Luca slid to her side, being mindful of what he touched. It was quick and painless, the last chapter in her life written in blood. The end.

Taking one last look around the trailer, Luca picked up the phone and called the police. They would come, discover her body and, hopefully, little Bradley would be whisked into a much better life. There was always hope.

Back on the street, footsteps followed him. “Déjà vu,” he said, not needing to turn to see who it was.

“You appear to have a penchant for following me on my nightly rounds.”

Jordon nodded in agreement. “Like it or not, I feel responsible for you as your maker. Though to you, I must seem to be an utter nuisance.”

“True, yet you do childish and fool-hearted things. You killed that woman, drained her, and then called the police. They’ll find the puncture wounds. They’ll question it.”

“There was an infant. I couldn’t walk away and leave him helpless.”

Jordon rolled his eyes, a high-pitched laughter emerging. “You’re all heart. And the boy, explain that.”

In the distance they both heard the police sirens.

“You don’t recognize him?”

“Should I?” asked Jordon.

“This isn’t someone I took a random interest in. Call it karma or whatever. But we both knew him before.”

“Think back a hundred years or so.”

“That’s impossible,” scoffed Jordon, dismissing him. “He’s nineteen, give or take a month, and not immortal.”

“Think about it. Try to remember his face.” He allowed Jordon time to reflect. “Do a memory scan.”

Jordon closed his eyes and went silent. After five minutes had passed he opened his eyes. “Johnathan?”

“Yes, Johnathan,” said Luca, his thoughts drifted to the second night he met with Johnathan.

Xondra Day has penned an exciting new twist on the paranormal story with The Blood Between. I couldn’t wait to get my hands on this story and I’m glad I did. The characters are interesting and I wanted to see what would happen to them. There are lots of twists and turns that kept my attention. I had to know how the pieces of the story fit together. Kyle is a very shy person. He’s not one who stands out in a crowd and he’s not one to expect attention. I liked that about him. He’s realistic. As for Luca, he’s a vampire. I can’t say I got him, like I did with Kyle, but I liked him. He’s true to himself. In this version of the world, vampires aren’t seen. They’re folklore—nothing more. I rather enjoyed the change. As with any story, there are moments of down time. In this book, there were more than a couple times when I came across very similar or the exact same phrase used. The repetitiveness yanked me from the story, but the need to know about Kyle and Luca pulled me back. Another thing I had issue with is the &quot;telling&quot; quality in the story. There are some really emotional moments, but I felt like I was being led through the situation as a bystander, not immersed in it. The ending is interesting, but I felt it to be a bit abrupt and I wanted to know what would happen after. But it gives the author a possibility to create a sequel. There’s lots of potential in the tale and I think with a little more detail and a little more time, it could have been a real knock-out. If you want a vampire story with some new twists on the old favorite, you need to read The Blood Between. http://whippedcream2.blogspot.com/2011/06/blood-between-by-xondra-day.html?zx=dd1cd66e8d1b0450

Kyle is on his way home after his late night shift at work when he spots a stranger who gives him the chills. When Kyle tries to avoid him, the stranger makes a point of making eye contact with him. The vampire Luca has been waiting for Kyle, his mate, to come to him. Now that he has spotted him, there is nothing he won&#039;t do to keep him by his side forever. The Blood Between by Xondra Day is a tale of love that spans centuries through the reincarnation of human souls. Luca has been waiting for his mate&#039;s reincarnation for a very long time. Kyle has no idea that vampires exist so when they first get together, things do not go as Luca first plans. However, the lure of what they once were to each other brings these two lovers back together. The chemistry and love that Luca and Kyle share is beautiful to see unfold. This is my first book by Ms. Day, but it will not be my last. I really enjoyed it and am looking forward to reading many more of her works.

I enjoyed this book. It&#039;s rather dark at times, filled with a ton of angst between all the characters involved I liked Luca, but Kyle not so much. He was dumb at times. And his reaction in certain situations like learning about Luca being a vampire didn&#039;t work for me because it lacked realism. I know it&#039;s paranormal, but I&#039;m like that. The author did manage to weave a world which did work along with an interesting set of secondary characters. It&#039;s a short read, but you get the sense of reading a whole novel when finished. A http://manohmanreviews.blogspot.com/

Beyond Friends is a quick read by author Xondra Day. This author is new to me and while I liked the blurb I am always a little anxious about reading someone new. This story settled any fears about Ms. Day I might have had. Beyond Friends, the story of two young men who almost loose the chance to become something other than friends, was wonderfully written. The characters are complete opposites, yet, in some ways a lot alike. Jack is in his early 20‘s, runs a bookstore almost single handedly, and has no personal life to think of. Rain is in his late teens, works a boring job and wants the one thing he can’t have – Jack. Both want love, yet are afraid to reach for it. The emotions the men go through while coming to terms with their feelings for each other are wonderfully showcased. The story comes across believably as it is easy to understand why Jack and Rain behave the way they did. Although Rain has to go through a traumatic experience before these two come together, I love the way the author brought them together and wrapped up the story. Beyond Friends felt like just a beginning and I would love to see these two again. I will be interested to see what Ms. Day has planned next. Reviewed By: Lydia http://top2bottomreviews.wordpress.com/2011/05/11/beyond-friends-by-xondra-day/