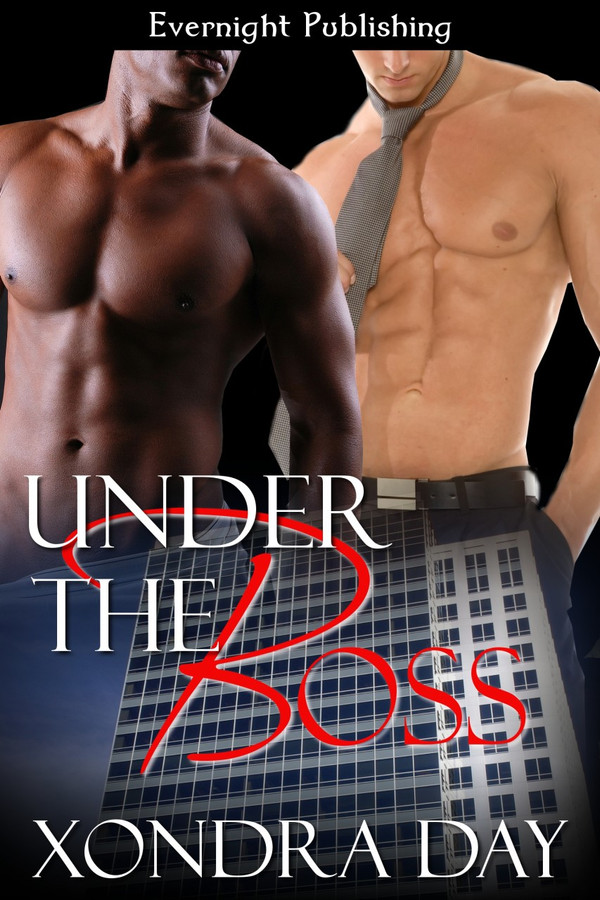 Darren Johnson never had much liking for his boss, Jensen Brookes. But when the two are thrown together on an impromptu business trip, they start to get to know each other for the first time and there's no denying that there's a strong mutual attraction between them.After a hot encounter, both men have to return back to the office and their otherwise mundane lives doing their best to keep their feelings in check. A line has been crossed and their professional relationship has changed into something much deeper. Could it be just lust or possibly love?

Resisting temptation wasn’t easy for Darren and as Jensen’s lips met his for the first time, he felt as if he’d melt right there. When Jensen’s tongue met with his, he found it difficult to stifle back a moan. He wanted this man, as was evident by the way his cock throbbed inside his trousers and the thought of Jensen touching him was enough to nearly drive him over the edge.
“We can stop if you want.” Jensen pulled away slightly, his breath tickling Darren’s ear.
Everything inside him said that would be the most practical and sensible thing to do, but the reality of his life was that he was neither of those things. “No, don’t stop,” he managed to say as he ran one of his hands up Jensen’s firm, muscular thigh.
“Nice tie,” Jensen said, toying with it, loosening it with his fingers. “It suits you. I like that shade of green.”
Darren spread his legs as Jensen’s other hand toyed with his tented crotch. He leaned back on the bed as his boss now hovered over him. Darren reached up and started to unbutton Jensen’s shirt. Even through his clothes, Darren could tell that he carried a fine physique. This man wasn’t a slouch at work or play!
“God, you smell wonderful,” Jensen said, his breath hot and wanting. “You smell good enough to eat, or at least… lick.”
“Trust me,” Darren replied, feeling extremely naughty. “I taste even better.”
“I plan on sampling, just to warn you,” Jensen teased.
“I’ve no complaints.”
Jensen’s fingers found the buttons on his shirt and one by one, he popped them open, sliding the garment down over Darren’s shoulders.
“That’s nice,” Darren murmured, enjoying Jensen’s soft touch as his hands grazed across his chest. He wanted so much more now. He wanted this hot, sexy man to touch him all over. Darren wanted to experience everything about him. It had been a while since a man had touched him like this. He missed it more than he’d thought.
Darren lifted his hips allowing Jensen to pull down his trousers. He nearly lost it when Jensen settled between his legs, massaging his boxer-clad bulge. He was wet, and Darren could feel his desire growing. “God,” he muttered, his words stifled by his own hand as he covered his mouth. Jensen played with his throbbing cock, releasing it.
“Does that feel good?” Jensen asked, his voice husky.
Darren felt Jensen’s grip tighten. He nodded. “Yes.”
“And when I do this?” Jensen pulled back Darren’s foreskin and ran one finger across the slick tip. “How does that feel?”
Dude was toying with him and playing with him literally. Darren looked down to see Jensen’s head between his legs and when he took Darren’s cock into his mouth, Darren nearly passed out. “That’s awesome,” he gasped. “Don’t stop. Suck my cock.”

Darren Johnson doesn&#039;t need trouble at work, but he can&#039;t help being attracted to his boss, Jenson Brooks. He tries to work and ignore the desire he feels for Jenson. When it appears his boss has it in for him and can&#039;t stand him, Darren is left pinning for the man. When both Darren and Jenson go on a trip to take a look at some property the company is thinking of buying, both men learn a great deal about each other. When the deal places the company in danger, they band together to save their jobs. Under the Boss by Xondra Day is a fast-paced hot short story. I liked Darren; he is strong, hard working, and passionate. Jenson is trapped a little by the expectations of his job. When they both set aside their differences, they discover a passion they share. They make a great team and I loved reading their story.

http://www.twolipsreviews.com/content/index.php?option=com_content&amp;task=view&amp;id=8073&amp;Itemid=36 Under the Boss by Xondra Day is a fast-paced hot short story. I liked Darren; he is strong, hard working, and passionate. Jenson is trapped a little by the expectations of his job. When they both set aside their differences, they discover a passion they share. They make a great team and I loved reading their story.

Under the Boss by Xondra Day was a fun quickie. Another one of those good lunch break reads. Darren is Jensen’s assistant, and they hate each other!! Jensen seemed to dislike Darren from the moment he met him. Their boss Eric has told him that Darren’s qualifications and his work since joining the company are too good. He can’t fire him, because he has absolutely no cause. To top it all off he is sending both of them on a business trip to check out some land for development upstate. Another blow is they get to the hotel, and there is only one room booked for them with no others available due to a quilting convention. Forced together they form a truce, and make an effort to get along. The more they get to know each other the more each of them start to notice that the other is very attractive. Talk about cutting the sexual tension with a knife. Will sleeping together make their working relationship worse?? And what is going to happen when they get back to the office are they friends, lovers, or friends with benefits now?? While I enjoyed this book, I do have to say there was something during the sex scenes that got me giggling. I don’t know if it was just me, but the line “I’m going to shoot” woke up my inner 13 yr old. I think y’all will love these two guys. There is something to love about both of them from the beginning. I love stories like this where instant attraction is hidden in animosity. The fireworks that come from that tell you they are gonna be explosive when they finally stop and truly look at the other man.

http://www.evernightpublishing.com/under-the-boss-by-xondra-day/ Reviewed by Stacey Jo: Darren Johnson is the personal assistant for Jensen Brookes and neither one of them seems to like each other much. They are known at the office for not liking each other. Jensen even asks if he can have a new assistant but his boss tells him no and even asks if it’s because Darren is black. Jensen immediately says no way and the next day decides to make amends and apologizes for his bad behavior. They are sent off on an impromptu business trip and while there, they end up getting to know each other and find that they actually like each other… a lot. Although they know they shouldn’t mix business with pleasure, they can’t resist each other. Afterward, Jensen tells him he wants them to remain friends but Darren can’t help but feel a little hurt because he really likes Jensen and would like for it to be more than just a fling. Jensen finally decides he’s had enough of floundering around as a single guy and doesn’t care what his boss or anyone else thinks and invites Darren for a weekend getaway where they examine their feelings more closely. It’s a fairly short story and has more of a HFN ending. You get the sense that things are going well, or in the direction that they want.It starts out as an enemies-to-lovers though because they admit that they can’t stand each other. It’s more like they have pent up sexual tension toward each other and don’t recognize it for what it is. It was a sweet little story if you are looking for something short, well-developed, and like the enemies-to-lovers but want one that resolves quickly. A﻿

A Little Piece of Heaven by Xondra Day