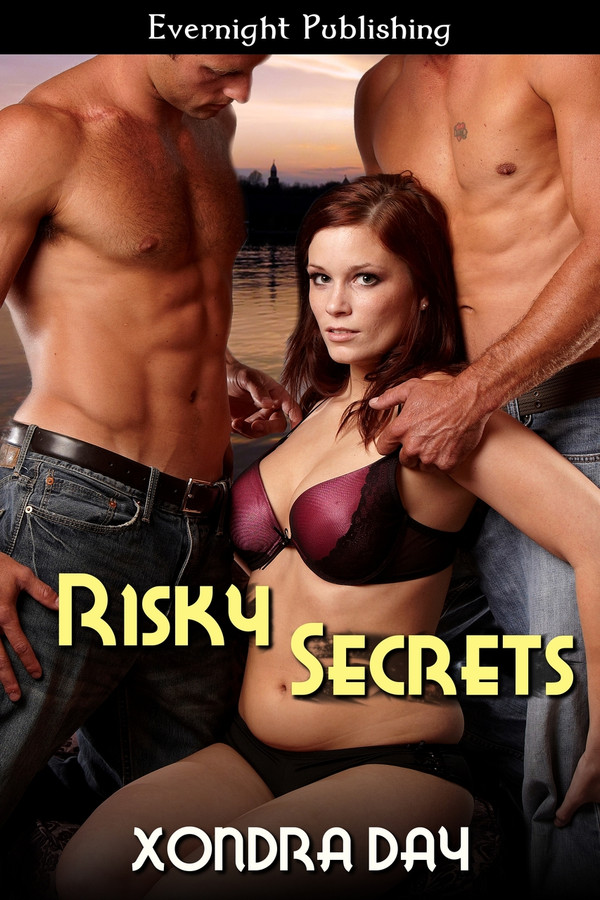 A successful bestselling author of erotica, Jayne Royale lives her life vicariously through every word she writes in her 'naughty books'. Desperate for a change of scenery, she plans a trip to her secluded lake house in order to finish off her current book. When she meets the handsome new caretaker of her property, Jayne's instantly attracted to him.
Keith Barrington hides his secret well. Being bisexual has eaten him up nearly all of his life. When he meets the sexy new bartender at the local watering hole, his otherwise routine life is suddenly shaken up. To make matters more complicated, he's also attracted to a client who's everything a man could ever want in a woman.
The new bartender at Lucky's, Tom Warner has come to Pine Bluff because it's the perfect place to hide when you want to disappear off the face of the earth, or so he'd initially thought. He never expected to meet both a man and a woman who could stir his heart. He refuses to put their lives in danger because of his stupid past mistakes. But when a hitman shows up, things become not only complicated, but also extremely dangerous.
It takes only one night to change their lives forever. And when the smoke clears, can love prevail above all?
Be Warned: menage sex (MMF), m/m sex

Jayne bit down on her bottom lip when she felt Tom’s two fingers sliding between her already slick folds.

“Feels good,” Tom whispered, stroking her engorged clit. “Tell me you like it.”

“I like it,” Jayne replied. She loved it. She’d only ever fantasized about things like this happening to her. But this was real and better than anything she’d ever written about in her books. The intense pressure building between her legs caused her knees to weaken. Damn it, she was coming.

“That’s it, come for me.” Tom held her close. She felt his hot breath against her cheek as she clung to him. Her head felt light and airy like cotton candy. She closed her eyes and concentrated on breathing deep. “Fuck your pussy with my fingers,” he ordered. “Take them inside that tight cunt.”

“Oh,” Jayne said. She wriggled against Tom’s fingers and felt them slip deeper inside her. She tightened her pussy around them, and pushed down further. Jayne lifted her hips up and down. She gyrated and fucked herself slowly. The feeling was sensational. “I’m coming,” she cried out as waves of pleasure overtook her. “Fuck me, please!”

“I think she likes it,” Tom said. “Underneath that subdued exterior lies the heart of a wild woman. I knew it.”

Jayne groaned and licked Tom’s shoulder. She was done with being proper. The inner lusty woman inside of her was breaking free.

Keith pushed up from the bed. He went to Tom and Jayne. He slid one arm around Tom’s waist and the other around Jayne’s, pulling both to him. The heady scent of sex had already filled the room around them. He inhaled deeply and felt his cock throb with wanton desire for both of them. He wanted to fuck Tom and Jayne. He wanted them together on the bed. But for now he had something else in mind. “Both of you, on your knees.” They nodded and did as he directed.

Tom looked up at Keith and winked. “Now that you have us both where you want us, what are you going to do with us?”

Tom jutted his hips forward. He griped his cock and aimed it at Tom’s mouth. “Suck it,” he said. “Both of you, suck my cock.”

Tom licked Keith’s shaft up and down. He moved a little when he felt Jayne massaging his balls. She glanced upward and grinned wickedly before she lowered her head and concentrated on taking each in her mouth. “That’s it,” Keith encouraged. “That’s nice. Keep doing it like that. Suck my big dick. I know you both want it.”

“I want it,” Tom replied, popping Keith’s cock from his lips. “I want you to fuck me like you did the other night. I want you to pump my tight hole. Jayne, he’s good at fucking. You have to experience it.”

“Sounds rather good,” Jayne replied. She reached between her legs and played with her pussy.  “I love your cock, Keith. I bet you can work wonders with it.”

Keith’s cock felt smooth in Jayne’s hand. Of course this wasn’t the first penis she’d seen in her lifetime. What mattered more was the man it was attached to and knowing the pleasure that he would give her. She didn’t doubt the motives of either man. They’d been up front with her, and she certainly wasn’t coerced into doing something she didn’t want to do.

Jayne withdrew his cock from her mouth and squirmed when Tom’s tongue grazed her clit. He was behind her now with his face buried deep between the cheeks of her slightly upturned ass.

Jayne looked back at him to see that he’d somehow gotten rid of his clothes and was now naked jacking his cock as he sat back on the floor.

“I want the two of you on the bed.” Keith stepped forward and assisted Jayne to her feet. He was strong as an ox. She’d never noticed his strength before until now, and with his hands guiding her to the bed, she felt extremely feminine and every inch a woman. She slipped into Tom’s arms and onto her stomach. “That’s near perfect,” continued Keith. “Lift that cute ass of yours in the air.”