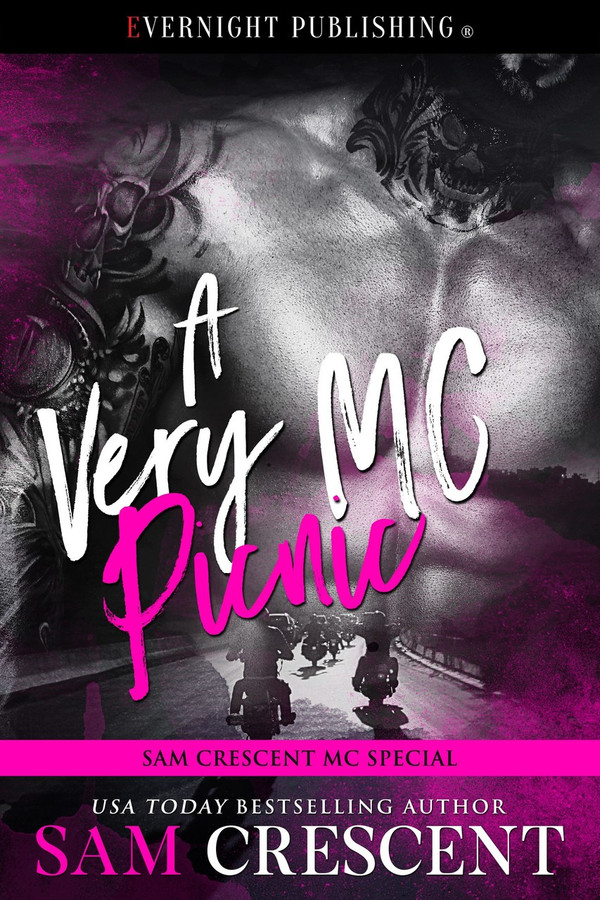 In a one-off special, six of Sam Crescent’s MCs come together in a family picnic that would be normal if it were for anyone else, but for The Skulls, Chaos Bleeds, Trojans MC, Dirty Fuckers MC, and Saints and Sinners MC, it is anything but.

By invitation only, the Billionaire Bikers MC wish for you to join them at a set location, to bring your family, your children, to enjoy a day of fun with no harm to come to anyone, providing all people can play nice.

This is just a bit of fun. It features past and future couples, and though it should be read if you love any of the MC books above, it is not necessary to do so. If you want to see more of Angel and Lash, Devil and Lexie, Duke and Holly, Simon and Tabitha, Pie and Lindsey, then this story is for you.

With Lola and Whizz’s help, he’d been able to find out everything there was to know about Russ and his precious little … club. He couldn’t think of that posh fucker being Prez of an MC.

“There’s got to be a reason for all of this.”

Devil rolled his eyes. “You’re not Tiny, so don’t play coy with me, boy. You and I both know what he wants, and we’re on the same side in this.”

“Fuck off.” It was all right for their women to get along. Devil didn’t have a problem with that, but he wasn’t about to let any fucking man here get the better of him. He saw Duke staring at him. That mean old fucker thought he was so tough because he’d just handed the Abelli their shit. Nah, none of the clubs here knew what true chaos was like or looked death in the eye and laughed. None of them.

The only respect Devil had was for the club standing at his side. The Skulls knew the pain, the loss of heartache, but they also knew when to back down, when not to fight, and the truth was, that was fucking never.

“You’ve got that frowny look on your face. You’re going to scare everyone away if you’re not careful,” Lexie said, coming to his side. She wanted to touch him. He sensed that. His wife always did, but she knew in front of the different clubs that shit wasn’t going to happen. Just like he wouldn’t pull her into his arms or show any weakness. His woman knew without a shadow of a doubt that he would fucking die for her and their kids, no questions asked.

“Be careful when you’re talking to them.”

“This is supposed to be a peaceful get-together. Yeah, well if that ugly-assed looking Trojan keeps checking Angel out, we’re going to have a massacre on our hands. Would you like me to stay peaceful then?” Devil asked.

“This was a bad idea. Really bad idea.”

Glancing over at the picnic table he saw Simon and Tabitha talking. His son was leaning forward, listening to the music that Tabitha played. Neither of them looked concerned about the potential dangers around them. They were heading into their teenage years, and it was moments like this that he realized his son, his little boy, wouldn’t be a child forever. Of course, Simon would always be his baby boy, but he was going to have to let go all too soon. It doesn’t seem longer than yesterday that he saw Simon in his crib, in that piece of shit apartment block with only Lexie to protect him, and protect him she would.

I loved it.. one of my 1click auto order authors

I&#039;ve been so excited about this book as soon as i heard about it and i wasn&#039;t disappointed. To have all those sexy alphas in one place was amazing. Their new joint mission will be exciting and heart wrenching. Can&#039;t wait.

I loved this one. It was great to meet all MCs, that I enjoy reading about in one place. If you ask me if you can read this as standalone, the answer would be no. It wouldn&#039;t have that impact without knowing personally each series. Or at least few. And if you hadn&#039;t, I really recommend to. Read The Skulls, Chaos Bleeds, Trojans, Saints and Sinners, Dirty F*ckers and Billionaire Bikers series. They each has their own way to grab your heart.

I need more. Darcy. Simon. All their stories. It’s nice seeing Devil and Tiny MC getting alone now. I hope they find these dirty scums who abused women.

What a group to get together!!! Couldn’t wait to find out what would happen, would there be a fight or fights, who would survive and who would be left standing. And what a a tease!!! Loved this!! One person found this helpful

This was a good book, but I had a bit of trouble keeping everyone straight. There was so much going on maybe I got confused. I knew the Skulls and Chaos Bleeds would come through but was disappointed the other clubs left. It was nice seeing a bit about Simon and Tabitha and I can&#039;t wait until they grow up and get their own book. The book was good but honestly, not my favorite!! Sam will always be a one click author though.

OMG! Thank You Miss Sam Crescent for this teaser of what&#039;s to come in the near future, I soaked this up real quick and it was great. Now I&#039;m a little disappointed some of the clubs refused to help but I have a feeling they&#039;ll be back. And as always The SKULLS and CHAOS Bleeds will come to the rescue, Best Book ever! Now the other clubs needs a little wake me up and I know you&#039;ll deliver, The Dirty Fuckers, Saint and Sinners, The Trojans will need help in the near future hopefully it won&#039;t be too bad but I know they&#039;ll be reaching out to the others for help, you did a WONDERFUL job with this book, I&#039;m giving this book 5 stars and I can&#039;t wait to see what you have planed. I&#039;m not worried about the SKULLS and CHAOS Bleeds, becauae they have each other&#039;s back, but I am worried about the others, woooo, you gave me life in this book, until next time Miss Sam Crescent

Sold to the MC Men by Sam Crescent

Bred by the MC VP by Sam Crescent and Stacey Espino