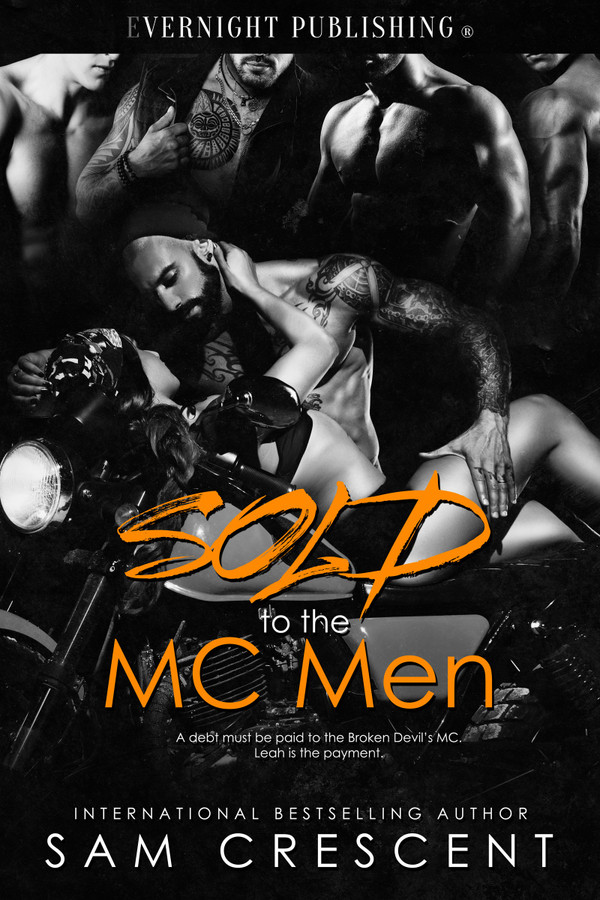 After living in foster care most of her life, Leah gets desperate and decides to take a chance and visit her mother, to see if the woman who gave her up has changed. It’s the biggest mistake of Leah’s life.

Her mother owes the Broken Devils MC a lot of money, and to help with the debt, Leah is the payment. Five men now own her. Five very strong, scary, sexy, ink-covered men can do whatever they want with her.

But these men don’t terrify her. Leah finds her place with them, cooking and cleaning. Surrounded by pure lust, Leah has never been with a man, and now, she wants five of them. There’s no way she should fall for them, but one touch, and it’s like fire. Yet it’s not just with one man; it’s with all five of them. She can’t make a decision of who to have, but why should she, when they all want her? Can it work out? Can they share? Is there a way all six of them can have a family and be happy?

Edge got up early and was surprised to see Leah already in the kitchen. She didn’t appear to be limping or look in any kind of pain. She wore a pair of shorts and a tank top. Her hair was down, and it looked like it hadn’t seen a brush that morning.

She turned toward him. Her hand was on her side.

“Morning,” she said. “Do you want some coffee?”

“It’s fine. Just a little pain every now and then.”

“Did I look like I was asking permission? Let me see, or do you want me to chain you up again just to look?”

“And you don’t have to be a royal pain in my ass, but guess what, I have to put up with that as well.” He gave her a wink, and approached her.

He put his hands on his hips and stared at her. He didn’t say a single word, waiting for her to realize there was no way out of this conversation.

“Fine. Fine.” She lifted up her shirt, and he noticed she wasn’t wearing a bra. The hard points of her nipples pressed against the fabric. They were so tight he wanted to suck them right into his mouth.

Pushing those thoughts aside, he watched her side as she lifted up the top. Never had a piece of fabric gotten in his way so much.

It wasn’t as bad as he imagined. It was just bruised. He reached out, touching her.

“It’s tender, but there’s no pain. Believe me, I wouldn’t be foolish enough to think I could handle something like that.”

He touched her ribs, and he couldn’t feel any breakages and she wasn’t screaming in pain. “We’ll keep an eye on you, okay? I don’t want you hurt or anything.”

“For a guy who is supposed to keep me prisoner, you’re treating me rather special,” she said.

His fingers stroked her ribcage, and he stood up, looking down at her, seeing the deep brown of her eyes. She really was a beautiful woman. A strong, passionate, sexy as fuck woman.

His gaze fell to her lips, and he wanted to taste them. Sliding his thumb across her mouth, he pressed, and she licked the tip of his finger. The air changed around them, and he moved her back until she was between the counter and his body.

Last night, after working his dick to orgasm, he’d been able to finally pass out in sleep. It hadn’t been an easy sleep. He thought about her throughout it all, craving her touch unlike anything else, and even now, he wanted her.

Lifting her up, he put her on the side, keeping her to the edge so that he was close. The shorts she wore were in the way, and as he sank his fingers into her hair, he kissed her hard, consuming her lips.

She gripped his shoulders, and any kind of pain she must have been feeling seemed to vanish.

Her fingers sank into his hair, gripping the length as he ravished her mouth. She tasted incredible, and feeling her shake against him, he couldn’t get enough of her.

Sliding his hands down to her tits, he felt how heavy they were in his hands, and heard her moan.

Breaking from the kiss, he pulled the shirt up, exposing those tits and finally getting a taste. He licked across one peak, then the next.

He was already moving down to her pussy, sliding his fingers inside the band of her panties.

When he touched her wet slit, she cried out.

“You’ve never had a dick inside this pussy, have you?”

“Yeah, that’s it, you want my dick. You want me to fuck your tight little cunt.” He stroked her clit as he teased her nipples.

He was about ready to explode. She was so responsive, and she held her legs open. The only way this could be more perfect right now was if she was naked and then he’d lick her pussy. He couldn’t believe how wet she was already. A few strokes of her clit and she was so close to coming.

When he finally took her cherry, it would be with his dick. He wasn’t going to do that in the kitchen. She needed a bed to lose her virginity.

“Then come for me. Do it and scream my name.”

Life has not been very good to Leah. She has a mother who sold her to an undercover cop and then she ended up in the system. Not only that, but she has not lost her job and her apartment, so she tries to see if her mother has changed. Guess what – she hadn’t. Instead, Leah gets sold again to the MC club. What’s a girl supposed to do next? Cook and clean for them of course! This was a hot novella, with a story as opposed to just sex! (Although there was plenty of that too.) You get to understand Leah’s motivation, in what she actually wants, and why she doesn’t think that being sold to the MC is that bad. You also get inside the minds of the MC’s themselves, and find out just what makes them tick, and why Leah works so well with them. Excellently written, there were no mistakes that drew my attention. Instead I was swept away with the story, and found it completely engrossing from start to finish. I absolutely loved the epilogue! I have no hesitation in recommending this if you want a hot story that is full of feeling!

This book was pretty good. No suspense or action in it, mainly just a bit different kind of love story. More editing is needed.

This turned out to be a nice story. The bikers are not good men, but for Leah they are. Full of lots of steamy scenes and great epilogues with their HEA.

Wonderful, absolutely loved this book! After a horrible childhood Leah really deserved the love from all five men. I can’t even pick out a favorite, they all seemed alpha, loving and everything you could ever want.

I really like Sam&#039;s books. Their short and sweet and always very entertaining. I was so looking forward to this book and couldn&#039;t wait to read it. The only reason I gave it 4 stars and not 5 was due to the main story line of the book that they feel bad about, the reason they come together, is very repetitive throughout the book.

Great read! Hot alpha males brought to their knees by one amazing little female. She may have been traded to them but her innocence and love of taking care of these rough bikers quickly had their walls coming down and their heart to open up! Who can resist a rough talking hard-loving biker?....... Let alone 5? Steamy, hot, and capable of giving you some very good day-dreams!

I have confusing feeling about this story. There were some things I liked, like how Leah acted after she was brought to the club, and there were some things I was irked with, like when the guys and Leah would go over things, that they already covered. Despite the blurb and the name of the book indicating, that this story may have some edginess to it, actually it was pretty relaxing read, with no dramas. It focuses more on connection between Leah and Trick, Dig, Tank, Junior, Edge, and how it grows between them to something special.

Bred by the MC VP by Sam Crescent and Stacey Espino