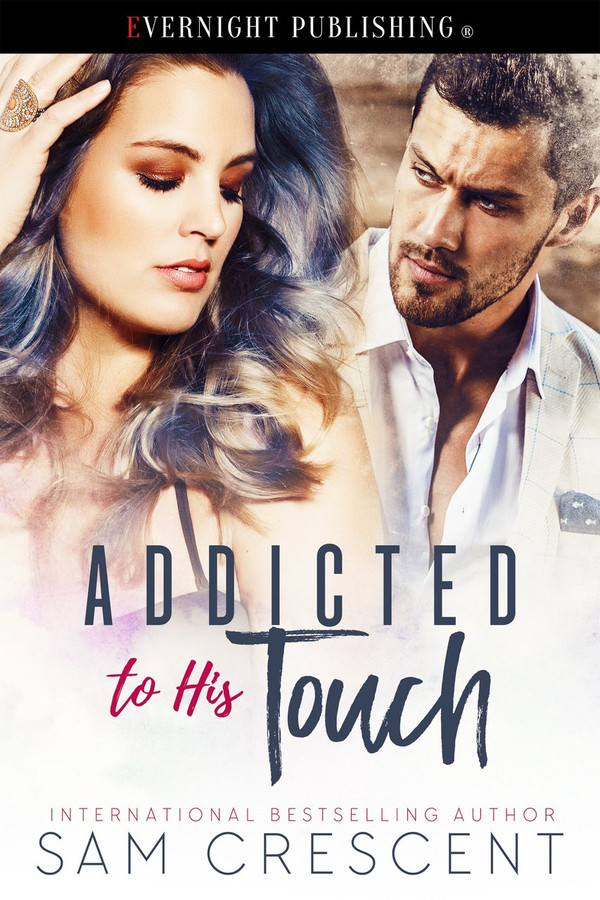 Jared has wanted Freya for a long time, and he knows the beauty she is inside and out, even if she has a bit of an attitude. That’s all for him, and he wants every inch of her.

Freya’s had a crush on Jared all of her life. Only she doesn’t believe any man can be faithful. She’s witnessed it through her mother—men only use women, and so the crush she has on Jared must stay that way. However, she’s no longer a little girl, and that crush grows into an attraction that's getting harder to deny.

Jared knows that once Freya is in his home, and in his life, all it will take is time. He’ll prove to her that he wants more than her body. He wants her love, her heart, her mind, and her soul. He’s not a gambling man, but he’ll take a risk for her, because that's what true love is all about. Can Freya get over her insecurities for a chance to be happy?

**This is a very safe read. Jared only wants one woman, and he’s willing to do whatever it takes to have her.

There was no sound on the laptop as she couldn’t watch outside in case someone was close.

She stood up, and turned to find him quite close behind her. She’d been so engrossed in the movie she hadn’t even heard him approach.

The suit looked so good on him as it hung down his body. She put the laptop she’d been watching down on the chair.

“I think it’s a little hot, don’t you? I’m going to go for a swim.” She turned about to head for the steps, when suddenly Jared caught her wrist, stopping her progress.

His touch was like fire, a brand on her skin, turning her on even more.

She wanted him more than anything else.

Glancing down at his hand, she felt him move up behind her, his front touching her back. Did she feel his rock-hard cock pressing against her ass? It felt so good, so amazing.

His other hand was on her stomach, holding her steady. His lips grazed her neck, and her eyes fell closed.

In that moment, Jared had all the power. There was nothing she wouldn’t do for him, for his touch. Her need was that strong, and so great.

“Do you have any idea what you do to me? What I want to do to you when I see you watching stuff like that? Did it make you hot, Freya?”

She could have a sassy comeback, or say something she didn’t mean at all. Instead, she went with the truth. “Yes, it did.”

“Do you want me to do something like that to you? Do you want me to touch your body? To make you come? He didn’t stop. I bet he pushed her down on that bed, made her come, and then fucked her raw.”

She was a sucker right now. “Yes.”

“Do you want me to stop?” he asked. The hand on her stomach glided down, his fingers teasing the top of her bikini bottoms.

Crap. What was she doing?

It was Jared. The man of her dreams, and she wanted him more than anything.

Jared had completed his work as fast as he could so that he’d get home to Freya. He’d not wanted her working today as she’d been putting in more hours than she needed to, and last night she’d looked exhausted.

Every night he had to take care of his dick as he didn’t want her to think all he wanted was a fuck.

He wanted sex, hot, dirty sex, but he wanted her more.

Being with her made him feel so fucking amazing. It was hard for him to describe. She made him laugh, and just feel like himself. He wasn’t a billionaire boss. He was just a man to her. She didn’t even treat him like her boss in the office. He was more of a friend, and he liked that.

Freya didn’t cower. She stood up, and she fought. He loved that about her. She had a bad mouth on her, an attitude that went with it, and he relished it.

No woman had ever made him work so hard to prove himself. She was a challenge that he couldn’t wait to win, and he would.

“Tell me what you want, Freya.”

Freya had known Jared for most of her life. She also knew he had craftily orchestrated her life to be at the stage it was – he’d helped organize her apartment, created the perfect job position for her in his company…she knew he had shifted things around and made them just so for her. And she just couldn’t be mad at him for it. Despite a large part of her wanting to give in to him and his desires, she still held back. She knew it would be hopeless though, that eventually she’d become addicted to his touch. I found this to be an interesting and somewhat intense story. Freya is not your typical heroine – feisty and fun on the one hand but also quite riddled with self-doubts and insecurities. Her parents had somewhat warped her views on relationships and sex, to the point where Freya was a virgin, despite her often bold exterior. I found myself quite drawn to her, sympathizing and empathizing on quite a few levels and this really had me invested into the story early on. I’ll be honest, Jared could have come off as a complete jerk. For me, he didn’t, I could see through to the man who truly wanted to just shower Freya with all her hearts desires and give her the things she craved, but in a different authors hands this could have been quite the train wreck. Readers who are sensitive to over-bearing heroes or characters who like to be in control (Jared installed cameras inside Freya and Sophia’s apartment “for their own safety”) still might not feel the same attachment to Jared in particular that I did. I don’t think this story will be everyone’s cup of tea – Jared flirts a little too close to the edge for it to suit everyone’s tastes – but I do think it’s worth taking a chance on. I personally enjoyed it, mainly I think because Jared makes it crystal clear that he’s not interested in just anyone, that he’s not wanting to conquer “a woman” or rise to a challenge. It’s Freya – specifically and only Freya – that he is interested in. That made up, in my mind at least, for a multitude of sins and made the story romantic and Jared just a fairly different, incredibly determined hero. I was really impressed that Jared didn’t rush Freya either. I feel this helped make the story more romantic – that he didn’t just want to push her straight into bed and consummate their relationship. I honestly feel Freya’s emotional doubts (her fear of being tossed aside when Jared was “done” and her worry about being hurt and cheated on) were the main reason Jared worked hard to not hustle her into bed. So when they finally did make it there it felt extremely important to me – like a milestone they had reached together. Erotica readers will also, I think, be impressed with the sex. While there’s clear emotional attachment between Jared and Freya, the sex is a little dirty and a lot hot. Spicy and explicit, I don’t think readers who like some heat in their reading material will be at all disappointed. With interesting characters and a whole bunch of emotion in the blossoming relationship between Freya and Jared I feel this story will be addictive for a wide range of readers. While certainly not to everyone’s tastes, I personally really enjoyed this story and found it different enough to be refreshing and hot enough to certainly earn it’s hot and sexy labeling. Recommended.

Sam Crescent definitely doesn&#039;t disappoint with this May/December romance. Freya is a fascinating young heroine and I&#039;m so glad to see she got her own adventure after meeting her in a previous story. Freya has issues in her past but despite the influences of her parents she is strong and smart and determined to get what she wants out of life. That is if only she can decide just what that is. I enjoyed her mixture of youthfulness and maturity, her confidence and her self doubt. Jared is straight out of a fairy tale. He&#039;s the man she had her first crush on, he&#039;s always treated her fairly and as an equal even with their age difference. He is successful and he knows what he wants. I loved witnessing their interactions, their chemistry is amazing and their solid past helps cement the promise for the future. I liked the fact that they were open about their attraction. This was an entertaining story, full of passion and heart. &quot;Addicted to His Touch&quot; is a beautiful romance with a vibrant, curvy heroine and a strong, sexy hero that any fan of the genre will be happy to have picked up. The Story: Jared has wanted Freya all for himself for sometime but with their age difference and their history he has been biding his time but he knows that now is the time to make his move. He&#039;s going to show Freya that he&#039;s much more than schoolgirl crush material

This story was a bit less angstvridden than SC writes. It was very sweet and the H was understanding and kind. I enjoyed the stronger female character

I Voluntarily reviewed a copy of this book Jared loved Freya for a long time and has wanted her even longer. To him she is beautiful and sweet and all he wants is to protect her and love her. But because of her childhood Freya doesn&#039;t believe that men can be faithful to their partners and so wants nothing to do with Jared. But Jared won&#039;t give up on her or on them. He will wait for her and he will be patient. Because he knew that he will break down her defenses. So he makes a deal with her, come live with him for a few weeks and then if she doesn&#039;t want him after that he will let her walk away. Loved it, sweet, sexy, short and Jared was just so patient and loving with her and he would do anything for her including waiting for her and spoiling her. Super sweet hot alpha male

Freya had known Jared most of her life. When she was younger she had such a crush on him. Jared knew of her feelings but never considered any relationship with her until she had gotten older. Freya had relationship hangups due to her parents break up and her mothers issues with men. It all turns out to be a wonderfully, sexy story that you won&#039;t want to miss.

I love it when a man makes no stops to get his woman and make her happy!! Jared is the perfect boyfriend! You can feel his love for Freya from the very beginning. Of course he is also smoking hot in the bedroom... Yum!! So happy Freya and Jared got their HEA!!

This book was sweet and light, without any dramas and no OW/OM. Jared was really into Freya. Never stoping fighting for her. Never stopping fighting her misgivings, that she got thanks to her parents. Jared always tried to give her anything that would make her smile. I was glad when Freya finally let go of her fears, accepted her feelings and let herself to be happy with the man she always had crush and later started to love.

Addicted to Her Curves by Sam Crescent