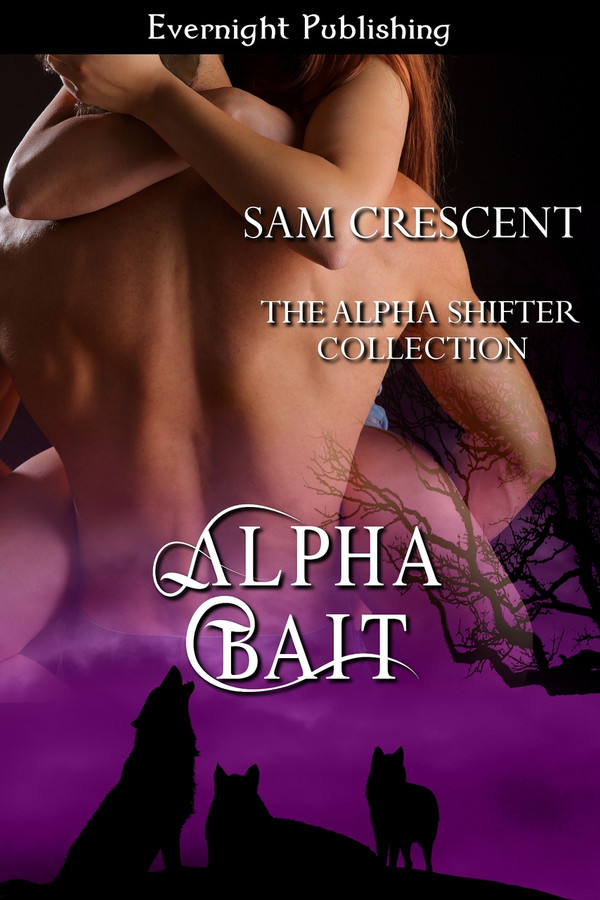 There is a law that binds an Alpha to his wolf and stops him from hurting others of his pack. If an Alpha lashes out with the intention to harm, then his wolf will stop it, forcing on the transition...but one wolf has found the loophole.

Chain is determined to inflict harm. He sends out the one woman he wants but cannot have, Victoria. She will be his Alpha Bait, luring another Alpha to his death, thus freeing Chain from the control of his wolf. For most of her adult life Victoria has been at the mercy of Chain. He scares her more than anything else. Doing as she’s told, Victoria sets the trap in order to gain Scorch’s attention.

Scorch is a good leader and strong Alpha. He will not hurt anyone. When a beautiful red-head ends up in his care, he cannot turn away from the attraction she inspires. Their wolves are mates, and they’re destined to be together.

However, what will Scorch do when he realizes Victoria is with him to lure him to his death? Can she really send the man she loves to his grave? Being Alpha Bait was never her choice, but who really holds her loyalty, Chain or Scorch?

Scorch’s tongue plundered her mouth, and Victoria moaned as he swept inside meeting her own. She gripped the fabric of his shirt within her fists needing him to take away the ache building inside her. When he left her inside her room she’d not known what to think or to feel. He was the first man to confuse her with his actions without even trying.

“You’re so beautiful,” he said, breaking the kiss. His hand held the back of her neck holding her in place.

Her heart soared at his words. No one had ever told her she was beautiful before. Apart from her parents but they didn’t count. Most parents were biased about their children. She had stood looking out of the window knowing in her heart what she wanted. Victoria wanted his arms wrapped around her, forcing all the bad memories away. There was no chance of her getting any peace tonight, not with everything that had happened so far.

Knowing he was meeting with other pack members didn’t help her nerves. Every second he was away from his pack left him vulnerable. Chain terrified her while Scorch tempted her with so much more.

“Then I will spend the rest of our lives together telling you how beautiful you are.” His fingers soothed out the tension within her neck. He brought her up close against him. “Now kiss me like you want me.”

Wrapping her arms around his neck, Victoria kissed him with all the pent up frustration that had been building inside her from their first meeting.

Opening her lips, she plundered her tongue into his mouth, giving him no chance to pull away. She held on tight never wanting to let go. His hands left her neck and slid down to cup her ass drawing her closer to his body.

“You’re going to make this harder for me to say no and walk away, aren’t you?” he asked.

i am really enjoying this group of books. I love the strong characters and the action. this book kept me reading all the way to the end and then waiting for the next one.

Book 2 of the Alpha Shifter Series. Victoria(Tori) and Scorch. I LOVE this man. he was so so compassionate and understanding, but ALPHA all the way. I felt for Victoria&#039;s suffering and the suffering of her former pack before she was made &quot;bait&quot; for Scorch. Loved the 10 yrs later.

I love about every book this author writes and can’t wait to read more from her. I thought I had heard about all the alpha wolves that had gone mad and just snapped. I have to say that I was wrong when I met Chain he blew everyone away. He is supposed to take care of his pack but he has found ways to hurt them. He wants to do the unthinkable and kill another alpha so that he can break away from the wolf inside him. He wants to control Vanessa and make her his mate but she says no and he wolf stops him. Vanessa is trying to protect what’s left of her pack. Chain has found ways to kill his pack and he uses a chain to keep them all in line. He uses the chain for everything that he thinks his pack needs. Vanessa has told Chain no too many times and is beat with the chain. She is sent out to do a mission she really doesn’t want to do. She would rather kill herself than put Scorch in harms way. Scorch finds out after he meets Vanessa that she is his mate. He wants to kill the person that caused her to almost die. Now he just needs for her to mate with him and tell him the truth. Once he finds out who her alpha is and what he is doing to his pack, he wants to be the one to do something to Chain and to protect the woman that he loves. I feel in love with Scorch and his pack. Everyone was treated the same and everyone seemed to get along. You could leave at any time. This is one of the best books about wolves that I have read in awhile. I just couldn’t seem to put it down. I set down and didn’t get up til it was done. Now I will have to read the rest of this series. The characters in this book were written very well and you knew who you would like from the very beginning of the book. You didn’t have to keep going back and forth. If you have not had the chance to read a book by this author then you really need to read some

Victoria’s alpha is bad and he is looking to use Mandy to become much worse. Victoria can do nothing besides follow the alpha orders, but meeting Scorch changes all of the past. Scorch is drawn to Victoria from the moment he sees her. The discovery that she was sent to orchestrate his death makes no difference in the way he feels. Alphas are built to protect, but there is one who wants to break the chains which hold him to the alpha&#039;s mandate. Scorch is the answer and Victoria is the key. Can they break free and find a way to end the devious and deadly plot? Scorch is an alpha like no others. His dedication to pack and Victoria is moving to read about. The sizzling draw of Victoria and Scorch is quite something to behold. Reading Alpha’s Bait will compel you to find the first book in the series to see just how it all started. -

This is the first in the new Alpha Shifter Collection by Sam Crescent. Like most of Sam Crescent&#039;s books it starts out with a bang and just keeps getting better and better. An alpha is not supposed to be able to harm members of his or her pack. Yet Chain has found a way to circumvent this safeguard and his entire pack lives in fear of pain and death. One of this pack is Victoria, who has suffered greatly at the hands of Chain and will suffer more if she does not do as he tells her. She is to go and seduce the alpha of another rival pack and lead him into a trap so Chain can kill him. Knowing she has no choice she sets out to do as told, but when she meets Scorch she is shocked to find they are mates. From the dramatic beginning to the climatic confrontation to the scorching last scene you will not be able to put this book down. There is no middle ground whether you like or dislike the characters in this book. The scenes are set for the reader to be able to visualize what is happening in the story. Sam Crescent has such a talent for creating storylines that capture the reader&#039;s imagination. She allows them to explore a shifter&#039;s world and play voyeur to the budding romances that may or may not end in bloodshed and death. Pick yourself up a copy today and enjoy the journey into the lively mind of the author and the worlds she creates. Ms. Crescent I have to tell you that you have a winner here and I cannot wait to see what happens next in the series.

I am really enjoying this series! Scorch is such a good guy and Victoria tries to do what is right by Scorch. Chain is a very bad guy. I fell in love with Scorch and his pack. They were so great to Victoria when they found her. I loved this whole book. I couldn&#039;t put it down.